How gloomy should we be about the economy?

We aren't in a recession yet, but if that company crashes, everyone is going to get burned 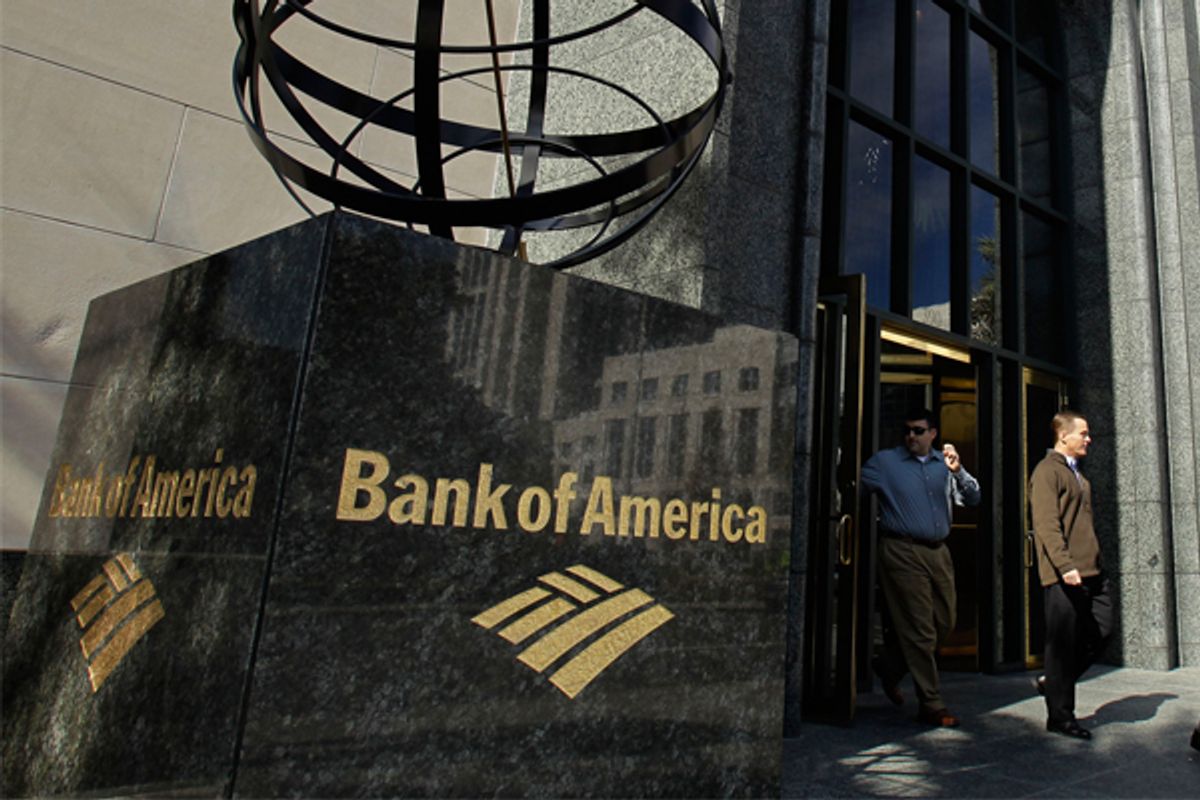 Are nerves fraying on Wall Street? Just how close to the brink of economic chaos are we? For weeks, the stock market has been swinging wildly every day, and each new release of economic data seems to raise more questions than it answers. But the most perplexing economic risk factor of all may be the case of the embattled Bank of America, which found itself at the center of a swirl of rumors on Tuesday. How Bank of America fares in the days to come could tell us more about the future of the U.S. economy than any other single factor.

On Tuesday, Bank of America, clearly rattled by its plunging stock price, took the extraordinary step of releasing a statement aggressively attacking the credibility of a blogger who had questioned the bank's finances.

Not just any blogger -- the gadfly in question was the infamous Henry Blodget, the impresario behind the gossipy, high-traffic Business Insider website. But the tone of the release was still unexpectedly bracing. Blodget, a one-time analyst at Merrill Lynch, is most notorious for getting himself booted from Wall Street by the SEC for committing "fraudulent research" in the course of hyping dot-com train wrecks. After he unkindly suggested on Tuesday morning that Bank of America might have to raise as much as $200 billion to fill a gaping balance sheet hole, the outraged financial institution wasted no time in reminding the general public of Blodget's ignominious history.

Mr. Blodget is making "exaggerated and unwarranted claims," which is what the SEC stated publicly when he was permanently banned from the securities industry in 2003.

Bank of America then proceeded to dispute Blodget's calculations. The question of whose numbers are correct is fiendishly difficult to determine from the outside, given the opacity and complexity of the finances of a bank as large as the Bank of America, and the near impossibility of knowing exactly how many bad mortgage loans the bank will have to buy back in the long run, a consequence of its disastrous purchases of Countrywide and Merrill Lynch at the peak of the financial crisis. But even as BofA expostulated at Blodget, the price charged to insure debt issued by Bank of America rose sharply, a clear and worrisome sign of investor skepticism.

And that's a big deal. Because if there is one thing that we learned from the great credit crunch of 2008, it's that the big banks are like Caesar's wife -- they must be above suspicion. As soon as doubt and uncertainty begin to spread about a publicly traded bank's finances, the panic is on. If the market thinks you need to raise billions of dollars, the ensuing credit squeeze will push the cost of raising that cash steadily higher, digging you into an ever deeper hole -- and then you really will need to find some more money, fast. Before you know it, you're on the verge of bankruptcy, and the stability of the entire global economic system is threatened. Add into the mix the fact that bailing out the Bank of America again would be one of the most politically self-destructive moves that President Obama could possibly consider in the current climate, sure to spawn screams of anger from both the left and the right, and we're facing one fine mess. Bank of America, by itself, is big enough that its failure could send a weak economy into a deep recession. But this particular too big to fail bank may also be too toxic to rescue.

And yet, while this drama played itself out on Tuesday, and even as credit market conditions in general continued to deteriorate, U.S. stock indexes registered their best day since the S&P downgraded. The Dow Jones industrial average rose almost 3 percent, a feat all the more remarkable because it happened on the same day as new releases of economic data indicating that the U.S. manufacturing sector is continuing to weaken and the housing market had plunged to a new low. In other words, even as signs continue to pile up that the U.S. economy is slowing to a standstill, investors suddenly started whistling a happy tune.

So what's going on? A review of the financial press suggests a handful of reasons for optimism, including signs that China's economy may not be slowing as quickly as feared, the possibility that Federal Reserve Chairman Ben Bernanke might announce a new effort to juice the economy by buying bonds and other assets as soon as Friday, and most intriguingly, a report from the Federal Deposit Insurance Commission announcing that the number of "problem banks" in the United States had fallen, on a quarterly basis, for the first time since 2006.

The number of banks on the government's list of institutions most at risk for failure fell in the second quarter, the first drop since before the financial crisis began....

The FDIC report suggests that, despite the swelter of recent data indicating a slowdown in the U.S. economy, there are still some encouraging signs that overall, the worst of the crisis is behind us: Smaller, local and regional banks are finding their footing again.

And yet at the same time, the health of a few hundred smaller banks offers little security against the tidal wave sure to be unleashed if a bank as big as the Bank of America toppled over. The ugly truth of our current economic plight is that while it is possible, if one tries very hard, to make a case that the U.S. economy isn't sliding inexorably into recession, it's much easier to argue that everything could go to hell very quickly if there is a sudden shock to the system -- a sovereign default in Europe, for example, or the collapse of a large Wall Street financial institution. As the economic blogger Felix Salmon pointed out on Monday, one of the most distressing legacies of the financial crisis is that the very fact that even though "national and super-national treasuries and central banks managed to come to the rescue and stave off catastrophe ... in doing so, they weakened themselves to the point at which they're unable to rise to the occasion this time round."

If the question is, how gloomy should we be about the economy, at least part of the answer lies in our likely unwillingness to take the dramatic steps necessary to avert another crisis. Ben Bernanke has already been preemptively accused of treason by presidential candidate Rick Perry, for the speculative crime of attempting to goose the economy by restarting the Feds' bond-buying quantitative-easing program. Obama can't be relishing the prospect of crafting another big bank rescue plan and Congress will almost certainly oppose any action.

We may not know for sure how bad Bank of America's finances are, but that may be irrelevant in terms of a policy response. This time around, we might get to see what happens when a too-big-to-fail institution finally does fail.