Norman Rockwell's "The Problem We All Live With" now hangs at the White House, upsetting... certain kinds of people 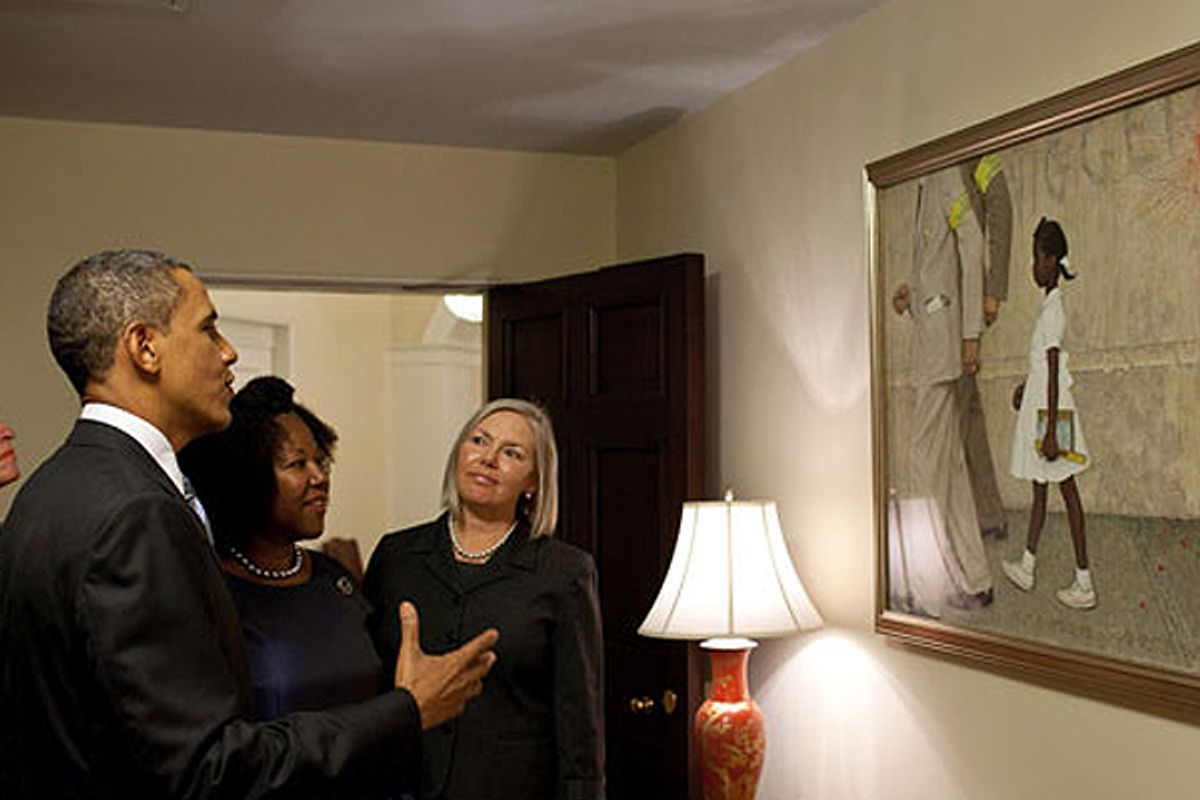 Politico recently switched the commenting system on its blogs to one requiring a Facebook account, in order to encourage more polite discussion and discourage trolling and racism. Thankfully for fans of awful comments, they did not make the switch on the articles, a completely meaningless distinction in 2011 but one that allows us to sample the responses of the Politico commentariat to this story, about Barack Obama hanging a famous painting in the White House. The painting is Norman Rockwell's "The Problem We All Live With," and it depicts "U.S. marshals escorting Ruby Bridges, a 6-year-old African-American girl, into a New Orleans elementary school in 1960 as court-ordered integration met with an angry and defiant response from the white community."

Here, in no particular order, are some of my "favorite" Politico comments on the story.

Christian conservative Martin Luther King would definitely have voted for Mitt Romney over Barack Obama. I am positive of this fact.

"His speech Sunday dedicating a memorial to Dr. Martin Luther King Jr. near the National Mall"

Oh you mean the "Monument of Greed"?

No other family of anyone featured on the mall was ever PAID any money for their likeness or words. Only the "King family". In fact they were paid nearly a million dollars.

Pretty humerous since the "Monument of Greed" was "Made in China" and they ended up making him look slightly Chinese.

What another utter DISGRACE that this administration has set upon America. Couldn't get the statue right and then to find out that it's all about GREED and how to make a BUCK.

So many blacks love to wallow in the past. It provides an excuse for their on-going failure as a group to advance in our society, and it serves as a tool with which to continuously bludgeon whites. They're addicted to feelings of outrage and resentment and thus obsess about events and conditions of 50 years ago or more. I'm convinced most of them WISH it were still 1965 so they could have an excuse to riot. It's apparently much easier (and safer) to sit around and whine and complain about all of the so-called injustice or "institutional" racism that is supposedly holding them back than it is to apply themselves and be confronted with the possibility of failing on their own merits or lack thereof.

Yep, black people definitely still wish it was 1965. Things were great for them in 1965! That's what the rioting was about, all of the fun they were having pretending to feel oppressed.

"matt22" has a certain word that he clearly really, really wants to say:

51 years ago. things have changed a lot..

just uttering the word 'n****r can get a white man fired from his job for creating a "hostile work environment", along with getting charged with a hate crime.

if you are black, you can scream it from the rooftops and it's ok.

Pigressives want to keep race issues on everybody's minds. they want every year to be like 1965. White guilt got Obama elected in 2008, why not try again in 2012?

It's just not fair, that white people are no longer allowed to use racial slurs at work. (This is why Pigressives, like black people, wish it was still 1965.)

"CatoTheElder" has a great recommendation:

Why not a painting of Rev Wright preaching "God damn America"? That would truly resonate with Barack Hussein Obama.

Yes, I am sure it would, but where would one even get a painting of Reverend Wright preaching "God damn America," and how would anyone who saw the painting know what Reverend Wright was supposed to be saying? Would there be a little caption, or a word bubble? Because then it sounds more like a "cartoon."

Of course, it's mean to pick on barely literate commenters. Sure, they're representative of a toxic right-wing blogosphere devoted in large part to hatred, pseudohistory, misinformation and paranoia, but the pros are really much better at writing this sort of shit without accidentally wishing out loud that it was still OK to say "nigger."