What's the worst that could happen in a Ron Paul presidency? 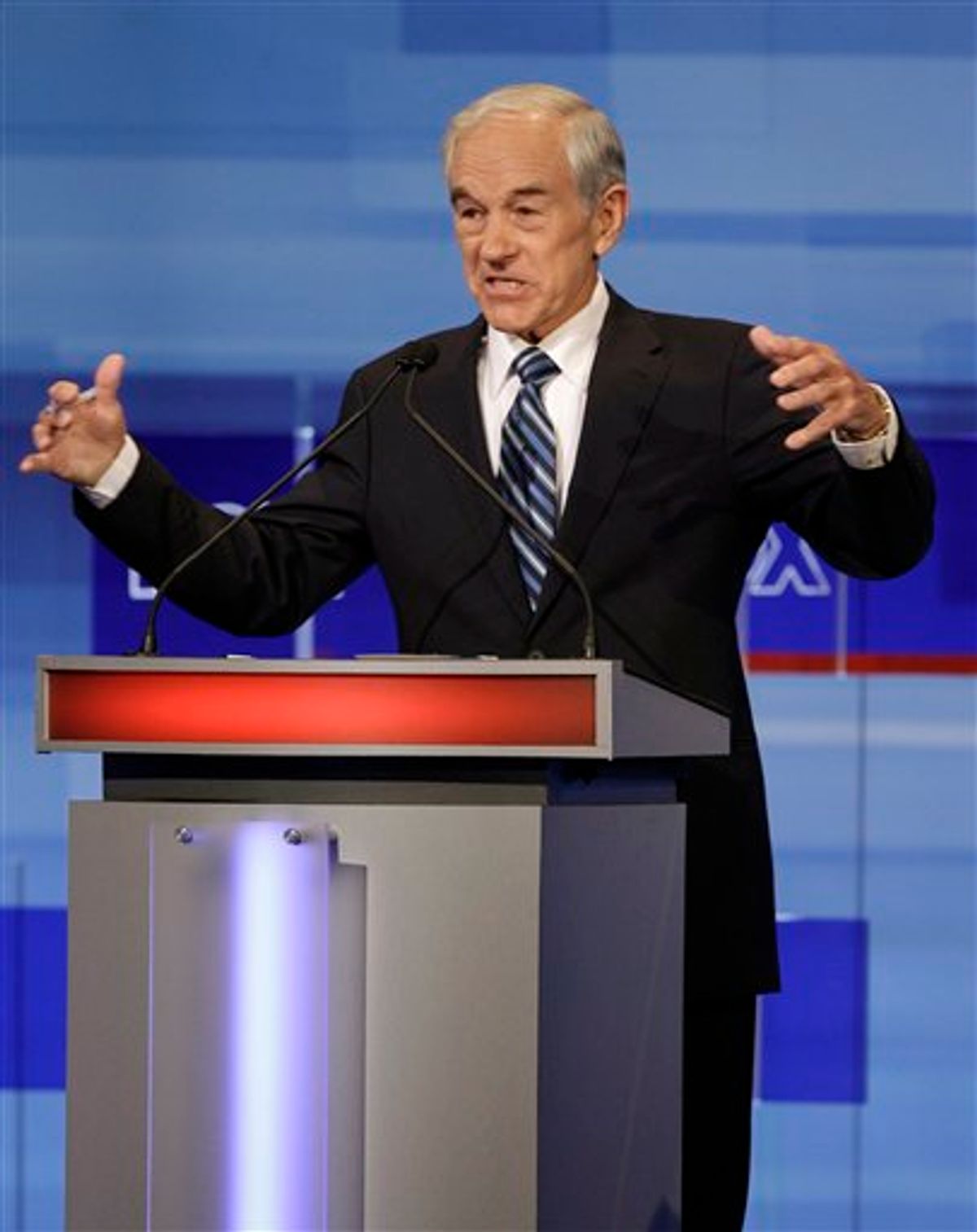 A compelling question from the Atlantic's Conor Friedersdorf: What would be the "worst-case scenario" of a Ron Paul presidency?

What's the worst that Ron Paul could do? Try to get America back on the gold standard, only to find that he doesn't have the votes in Congress to do it? I am not just being funny. Though Paul has some radical domestic policy ideas, I just don't see any of them getting passed into law. And in foreign policy and national security matters, the areas where he would exercise the most unchecked discretion, he is the candidate you'd least expect to unwisely provoke or launch a war.

I'm going to assume that we are all adherents of "mainstream economics" and not, like Paul, Ludwig von Mises acolytes -- though even Austrians would surely find something to worry about in a Paul presidency.

Let's start with the good: Ron Paul would likely be the best president doves and civil libertarians ever had. No pointless, expensive, bloody, illegal foreign engagements, or "peacekeeping missions" or "targeted drone strikes." No illegal wiretapping. The bloated Homeland Security state would likely shrink (over the strident objections of members of Congress in both parties). Banks would no longer receive endless supplies of secret money from the government, probably. (Though the Fed is independent, as Paul well knows, and they could still keep the cash flowing.)

On the other hand:

The president has a lot of power -- in fact he is in charge of executing the law, it turns out -- and every regulator and diplomat and judge appointed during a Paul presidency would presumably agree with Ron Paul. Hacks with contempt for good government make bad political appointees, as Bush taught us. Ideologues actively opposed to the existence of a powerful federal government probably make worse ones. Libertarian judges are great on individual rights; they tend to also be very bullish on the rights of corporations to do whatever the hell they want to anyone for any reason.

A Ron Paul presidency could very well mean the end of legal abortion in the United States.

He's never evinced any interest in enforcing anti-discrimination or civil rights laws before (and, indeed, he's gotten in trouble for racist material printed in his newsletters years ago). His Justice Department would respect individual rights but ignore civil rights.

And I cannot really imagine any sort of economic recovery happening during a Paul presidency. A Ron Paul presidency would really not get very much done, at all, actually. That is by design, because Ron Paul does not much like the government he seeks to sit at the top of, and by necessity, because the things Ron Paul will want to do will be opposed by the legislature.

Congress wouldn't allow him to put us back on the gold standard, which is good. It would presumably block all his Fed governor nominees (or ... would they?) and he'd be obviously unable to "end the Fed." But Fed vacancies are already bad and more vacancy does not equal a Fed better equipped (or willing) to address unemployment.

I can seem him vetoing the majority of the legislation that passes his desk. That probably got some cheers out there -- a lot of legislation is pretty lame, I agree! -- but I assume Congress would find Paul's budgets unacceptable and Paul would veto budgets sent to him by Congress. I can't think of how this impasse would be resolved. So ... government shutdown, again? (And, again, more job losses!)

Though a President Ron Paul faced with a Congress that looks like it does now would produce gridlock, a President Ron Paul faced with a totally Republican-led Congress would produce actively destructive gridlock. Even as they ignored the president's requests to defund the Pentagon, they'd find no presidential vetoes on any plans to gut environmental regulations and slash state aid and eliminate financial regulations and repeal "Obamacare." They'd make the tax code significantly more regressive and incapable of bringing in enough revenue to meet the government's obligations, providing yet another convenient excuse for Serious Grownup Talk about deficit reduction, meaning the best shot Social Security and Medicare's opponents will ever have at essentially eliminating those programs. No Congress would dare go as far as Ron Paul would like to go on entitlements, but the modern GOP has been trained to be less skittish than the GOP of 10 or 15 years ago -- Paul Ryan is the acceptable right-ward edge, now, and I'm guessing he and President Paul could find some awful "middle ground" that would make it through the Senate.

Basically, a Paul presidency would be very, very bad for millions of Americans, especially ones reliant on government assistance (state or federal). And the dysfunction would, I imagine, be so bad for the economy that I'm not sure the American working and middle classes would ever recover (not that I'm sure now anyone will ever recover, with our current situation). I mean, if you think "uncertainty" is what's stopping business from hiring now, can you imagine how "uncertain" things would be with President Paul wielding a veto pen and controlling the U.S. Department of the Treasury? And can you imagine Paul dealing with a 2008-style financial crisis? I am guessing he'd let all the banks fail -- which has its good points and its very terrifying points.

Also, so much for gun control, but that's basically dead in America anyway.

(And again: Sorry, women! No more control over your own reproductive organs for you!) (Libertarians, being largely boys, don't generally bring this one up when they talk about Dr. Paul.)