Office projects unemployment will remain at or above 8.5 percent through the end of 2012 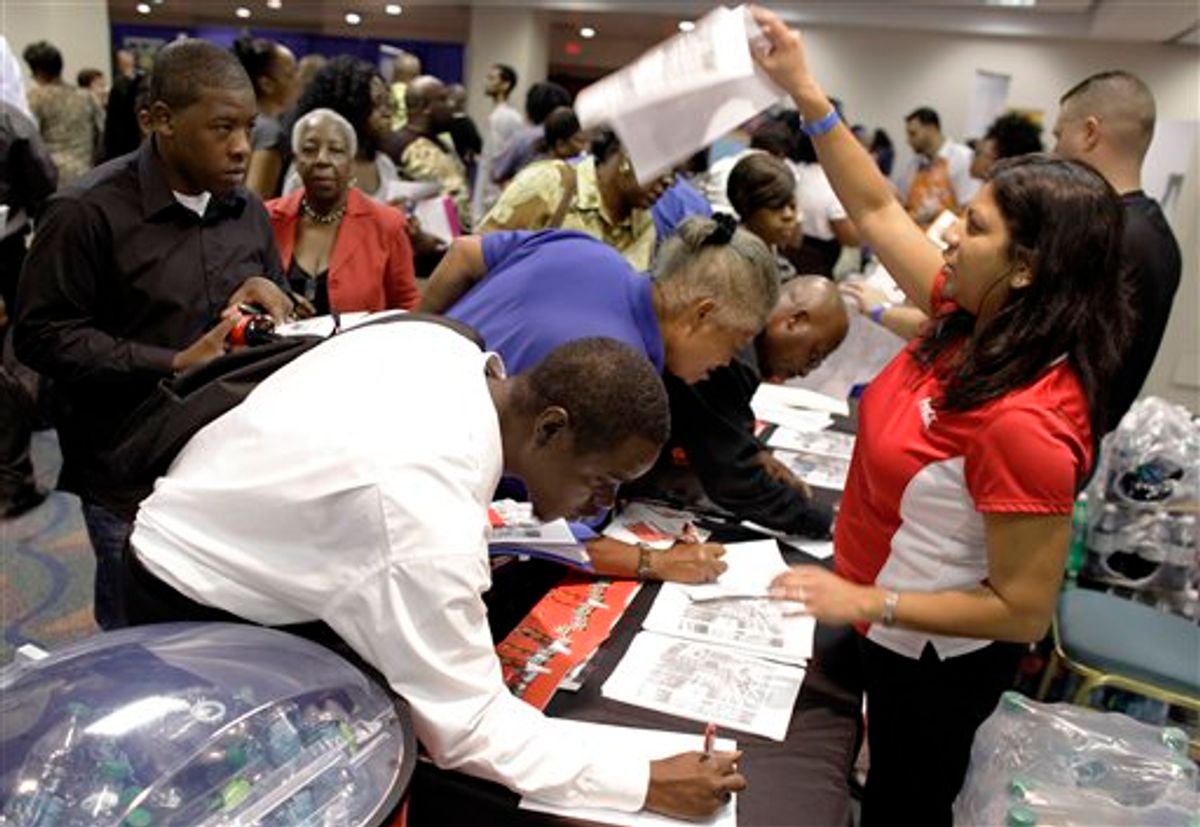 Coca-Cola employee Farrah Deonarine of Weston, Fla., right, passes out forms at a jobs fair hosted by the Congressional Black Caucus in Miami, Tuesday, Aug. 23, 2011. The fair is aimed at lowering the especially high rate of unemployment in the black community. (AP Photo/Lynne Sladky) (AP)
--

The federal budget deficit will hit $1.28 trillion this year, down slightly from the previous two years, with even bigger savings to come over the next decade, according to congressional projections released Wednesday.

The nonpartisan Congressional Budget Office says budget deficits will be reduced by a total of $3.3 trillion over the next decade, largely because of the deficit reduction package passed by Congress earlier this month.

Nevertheless, the federal budget will be awash in red ink for years to come. Even with the savings, budget deficits will total nearly $3.5 trillion over the next decade -- more if Bush-era tax cuts scheduled to expire at the end of 2012 are extended.

There is good news for the more than 50 million people who get Social Security benefits. After two years without a cost-of-living adjustment, CBO now projects a 2.8 percent COLA for 2012, up from the 1.1 percent increase the agency previously projected. The actual increase for 2012 will be announced in October. It is based on a measure of inflation.

At $1.28 trillion, this year's budget deficit would be the third highest, surpassed only by the deficits registered in the past two years. The budget year runs through the end of September. Through July, the deficit totaled $1.1 trillion, the Treasury Department said.

The new deficit projection for this year is $116 billion lower than the one made by CBO in March. Most of the change is from higher than anticipated tax collections from 2010 returns filed in the spring, the report said.

"A slight decrease in the projected deficit is nothing to celebrate, particularly when it is accompanied by the grim news that CBO expects the national unemployment rate to continue to exceed 8 percent well past next year," said House Speaker John Boehner, R-Ohio. "The president's policies were supposed to keep that from happening. Instead they've added trillions to our debt at the expense of our children and helped put our nation's credit rating in jeopardy. Where are the jobs?"

CBO's economic projections are more optimistic than those issued by many private forecasters. If economic growth is weaker than the CBO projects, that could reduce future tax receipts and widen the budget deficit.

The CBO completed its economic projections in early July, and acknowledged that the outlook has worsened since then. The stock market has fallen sharply since the nation's credit rating was downgraded earlier this month. And in late July the government significantly lowered its estimate of economic growth in the first six months of this year.

"Incorporating that news would have led CBO to temper its near-term forecast for economic growth," the report said.

Congress passed a deficit reduction package earlier this month that cuts spending by $917 billion over the next decade for Cabinet-level agencies and the thousands of federal programs they administer. The legislation also created a new joint, bipartisan committee in Congress charged with coming up with $1.2 trillion to $1.5 trillion in additional savings by late November.

If the committee of six Democrats and six Republicans agrees on a package, Congress must vote on it by late December. Failure to pass a package would trigger $1.2 trillion in automatic spending cuts, affecting the Pentagon as well as domestic programs.

The agency, however, warns that spending cuts and caps in the deficit reduction package will limit the government's ability to provide support for the economy, "and thereby restrain economic growth over the next few years."

Conrad said CBO's projections illustrate the need for the new joint committee to reduce the deficit by much more than $1.5 trillion. Conrad called for a deficit reduction package of at least $4 trillion over the next decade, a target that many economists say is necessary for the government to get its finances in order.

Rep. Chris Van Hollen of Maryland, ranking Democrat on the House Budget Committee, said, "The CBO outlook underscores the need for the joint committee to propose a plan to help put America back to work, coupled with a blueprint to reduce the long term deficit."