Why we'll never have children

People tell my wife and me that we'll change our minds. But I can't bear the idea of passing on my mental illness 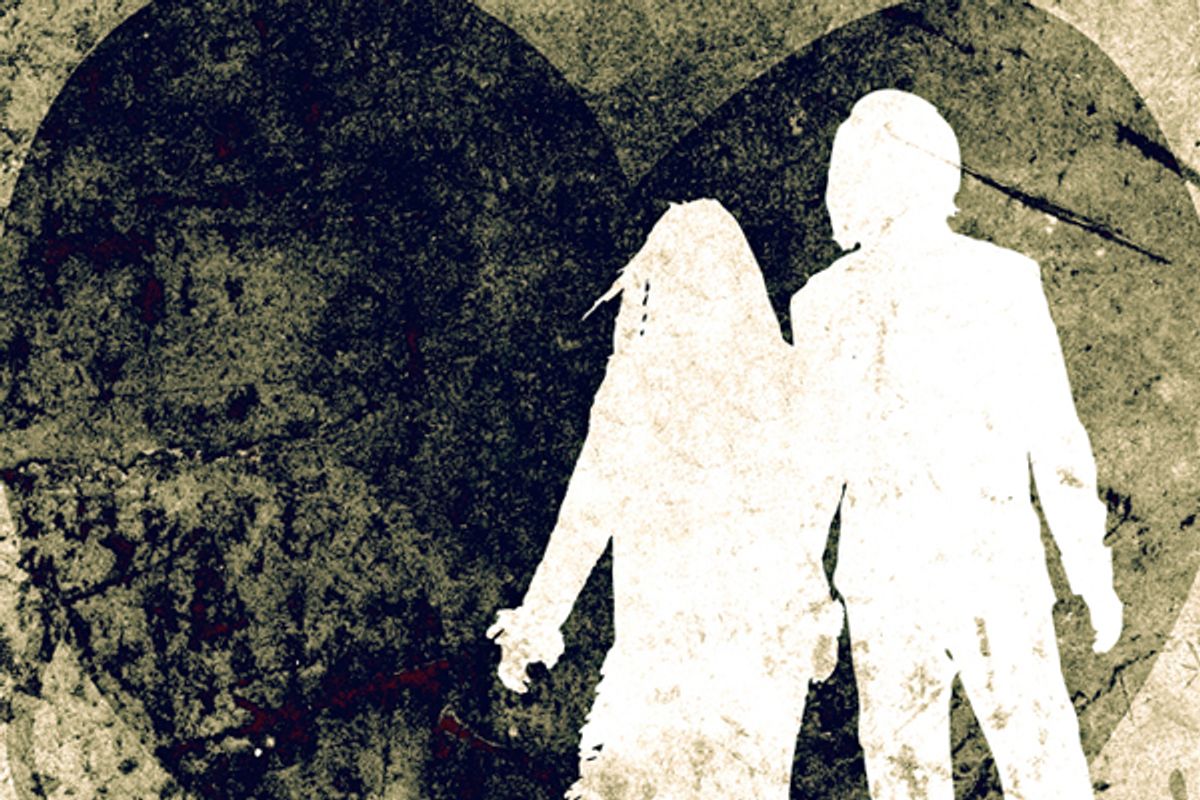 My 1-year-old nephew, Charles Xavier (yes, like the X-Men character), was puttering around the living room, thumping and bumping off furniture with a rubbery resilience that astonished me. No matter how many times he fell onto his bottom, he picked himself up and toddled tearlessly on. I'd never seen such a composed baby. As if to italicize the point, little Charles crept under the kitchen table, only to have his mother accidentally kick him in the head as she crossed her legs. My sister-in-law gave an embarrassed laugh, then scooped up her barely weeping son and plopped him in her lap. Charles quieted at once.

Then my sister-in-law asked the dreaded question. "Are you guys gonna have kids?"

I'm amazed at how many mothers and fathers ask this of childless couples. Of course you're going to have a baby, they're really saying. It's not a question of having one, but will you stop at one? What do you hope for? All boys? All girls? One of each? What if you have triplets? What a blessing that would be.

"We're not having kids," I said, with as much finality as I could muster.

"You think you won't," my brother said with that sly knowing parents always exude. "You'll change your mind after you have one. I thought I knew love before I had Charlie." He shook his head and smiled, as though with wistful amusement at the ignorance of his younger self. "Being a dad's the best feeling in the world."

Beside me on the love seat, my wife kept her social smile firmly in place, but I could feel her secret death glare.

I know it burned my wife to hear my brother imply that the love she shared with me was somehow inadequate, that it required the supplementation of another life. My wife once acted as a human shield for pregnant women braving the righteous mobs outside abortion clinics. She believes that if she had a choice, she would have chosen never to be born. She would never dare force the bittersweetness of existence on another.

Before my wife had a chance to voice any of this, I jumped in with the pat answer I always give when asked the dreaded question:

"We believe there's three kinds of people in the world: Those who live for their art, those who live for their children and the lucky few who can do both. We're creative. We just love going on adventures, love our little projects. They're our children. And if they ever disappoint us, at least we're not stuck with them for the rest of our lives." I patted my wife's thigh. "Plus, it's nice being able to have sex whenever you want."

My brother and sister-in-law gave us looks mingled with patience and pity. We'd learn. One day, the heavens would part and a perfect, precious cherub would descend on a sunbeam. Then the scales would flake from our eyes and hearts, and we would finally taste true love.

In all fairness, I do not know what it is like to cradle a little bundle of possibilities in my arms, to know that part of my soul resides behind those wide, curious eyes staring up at me, to feel that wondrous weight of responsibility of being trusted with protecting and nurturing this tender creature. But my brother will never know what it feels like to have a mind that isn't an ocean whose depths are clear to the very bottom, but a bog in which I wander, lost and lonely. Even during my brother's troubled teens, our father never looked at him like he was a mistake he desperately longed to take back. Though it breaks my heart, I choose to be childless because it is the lesser of two regrets.

A story: When I was 16, I came home from school one day to find my mother poking around in her garden by the backyard porch. The moment our eyes met, I knew something had happened to burst the membrane of normalcy that surrounded our lives.

I had two grandmothers, but I only knew one of them. I'd grown up with my mother's mother, and I adored her. She was a leathery old lady whose Halloween displays were the best in Upstate New York. My other grandmother, though, was a dark hole in my memory.

"She had a breakdown in a car when she was in her 30s. She was in a mental institute. She died there."

I'd never even considered the possibility that my paternal grandmother was still alive, let alone where she was and why we never visited her. Hearing she'd spent more than half her life in an institution -- it was another brutal reminder of how horrible my father's childhood had been, and why he never talked about it.

Now the world wobbled and whirled. A grandmother I'd never known, dead. It was too much to process.

"Yeah." I headed to my room to think.

"Yeah." I shut the door in her face. Enough. I didn't want to hear any more.

Inside, the house was filled with that purgatorial darkness that only seems to exist in dreams where you can't turn on the lights. My father was sprawled on the couch in the living room. Asleep, awake, dead to the world? I couldn't tell. Watching him, I felt some small measure of relief for him. The last, lingering goblin from my father's nightmare past had gasped and gone. Maybe now he could have a little peace.

My father opened his eyes. I have tried hard to forget the look he gave me then. At first I thought it was regression, the little boy whose father left before he was born, whose mother was taken away from him, who grew up with his fairy tale-cruel grandmother and grandfather.

But I saw that look again, on the night I had my own nervous breakdown, in the rearview mirror as my father pulled into the E.R. cul-de-sac, as he muttered to himself, "It's my childhood all over again."

Though he spoke of the past, I suspected his mind was on the future, my future, and the long shadow this night would cast over it. He had brought a child into the world who was born with his mother's broken mind. In that look I saw guilt, and regret. I believe my own father regretted that I was ever born, that I would suffer as his mother had suffered. Did I blame him? I sometimes wonder why he put me in my mother's belly, knowing I would come out wrong, damaged, my brain a shattered citadel. But no, I cannot and will not blame him. I choose to believe his hopes outweighed his fears when he found out I was growing in my mother's belly, a cracked little seed. I choose hope.

Not for myself. But that a time may come when a parent can hold his child in his arms, look in his eyes and know that the mind behind it is perfect, every single synapse. That a father will never look at his son like he's an error that can never be corrected.

Understand, I am grateful that I exist. I would never choose nonexistence, like my wife. I love this world, where every horror is matched by something doubly wondrous. I love my wife. Ours is a pleasurable symbiosis. I even love my malfunctioning mind.

I do not love my cowardice, which I'm afraid has won out in this situation. But I cannot bear the thought of driving my own child to the hospital, when he has his own nervous breakdown, and having him catch me staring at him in the rearview mirror, wondering, Are you a wrong I can never right?

I whisper an apology to oblivion, where my never-to-be-born child dwells. I am sorry I'm not strong enough to let my hopes overcome my fears. If you wish to know what I would have named you, come closer. Let me breathe it in an ear that will never be formed, so that it can be known by a mind that will never know memory.

Joshua LeSuer is working on a memoir about overcoming OCD.