We got our hands on it, or a reasonable facsimile 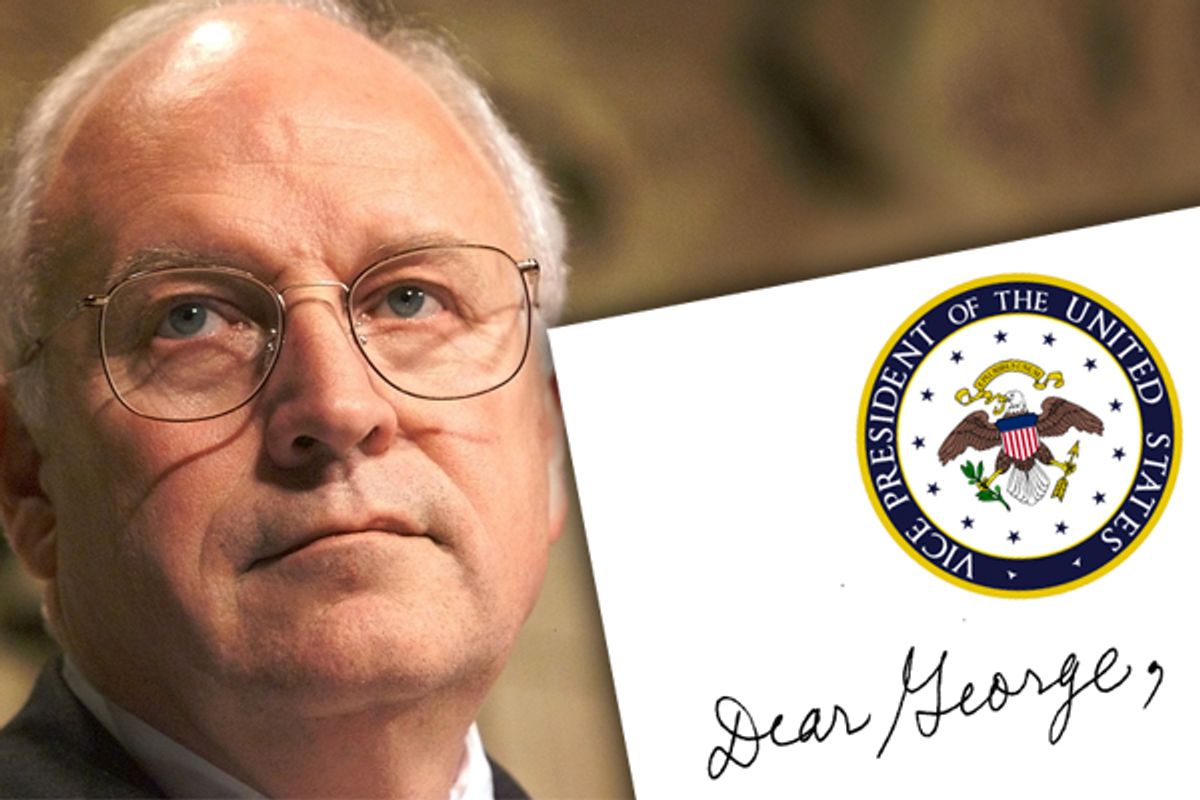 Former Vice President Dick Cheney reveals in his new memoir that in March of 2001, he wrote a secret letter of resignation, to be used in the event that he was unable to fulfill his duties. He wrote the letter, he tells NBC, because "there is no mechanism for getting rid of a vice president who can’t function," and Cheney had a history of heart attacks. He locked the letter in a safe, and told only the president and one trusted aide about its existence. No one has ever seen the letter -- until now.

Salon.com's War Room Secret Vice Presidential Correspondence Recovery Team tracked down the letter by following an elaborate series of clues Cheney placed around Washington, D.C. We reveal the contents of Cheney's secret letter of resignation below:

If you're reading this, it means one of the following things has happened:

And so I voluntarily and of my own accord hereby tender my resignation from the Office of the Vice President of the United States, effective immediately ... on the following conditions:

There's nothing I regret more than leaving you, Mr. President, without the sage counsel of your trusted vice president, besides the 1973 thing, but America must move forward in what I am assuming is a time of great national grief at my untimely departure from office. I know you'll do fine in my absence, but there are some things you should know.

The key to the Resolute Desk's top-right drawer is in the kitchen behind Barney's food. Torture is legal. If America is attacked by terrorists, Saddam Hussein is responsible. Pat Leahy can go fuck himself. Colin Powell is wrong about whatever he just advised you to do. So is Condi, probably. And Ashcroft, unless he was talking about porn or something. There's nothing the American government can do that the private sector -- specifically the Halliburton portion of the private sector -- can't do better and more efficiently. If you really really want to wiretap someone you probably don't need a warrant. If you ever get stuck writing a state of the union, just say something about a manned mission to Mars. Make sure the Justice Department is only hiring and retaining good conservative U.S. attorneys. Don't try to use the coffee machine in the Cabinet Room. It doesn't work right and also you're the president, you shouldn't be making your own coffee.

I think that about sums up all the possible advice I would've given you had I remained capable of fulfilling my duties for the entirety of your time in office. (Did I mention that torture is legal?)

One last, personal note: There's no doubt in my mind that you'll be remembered as one of the best, most effective presidents America's ever known, but just in case it looks like there is some doubt of that, try to make sure everything is as fucked up as possible on your way out of office. The American people, in their infinite wisdom, will pretty much forget it was your fault within six months of the next poor bastard taking over.

P.S. If you find the time, have someone shoot Harry Whittington in the face. He knows what he did.