Why the rout of Gadhafi undermines the idea of American exceptionalism 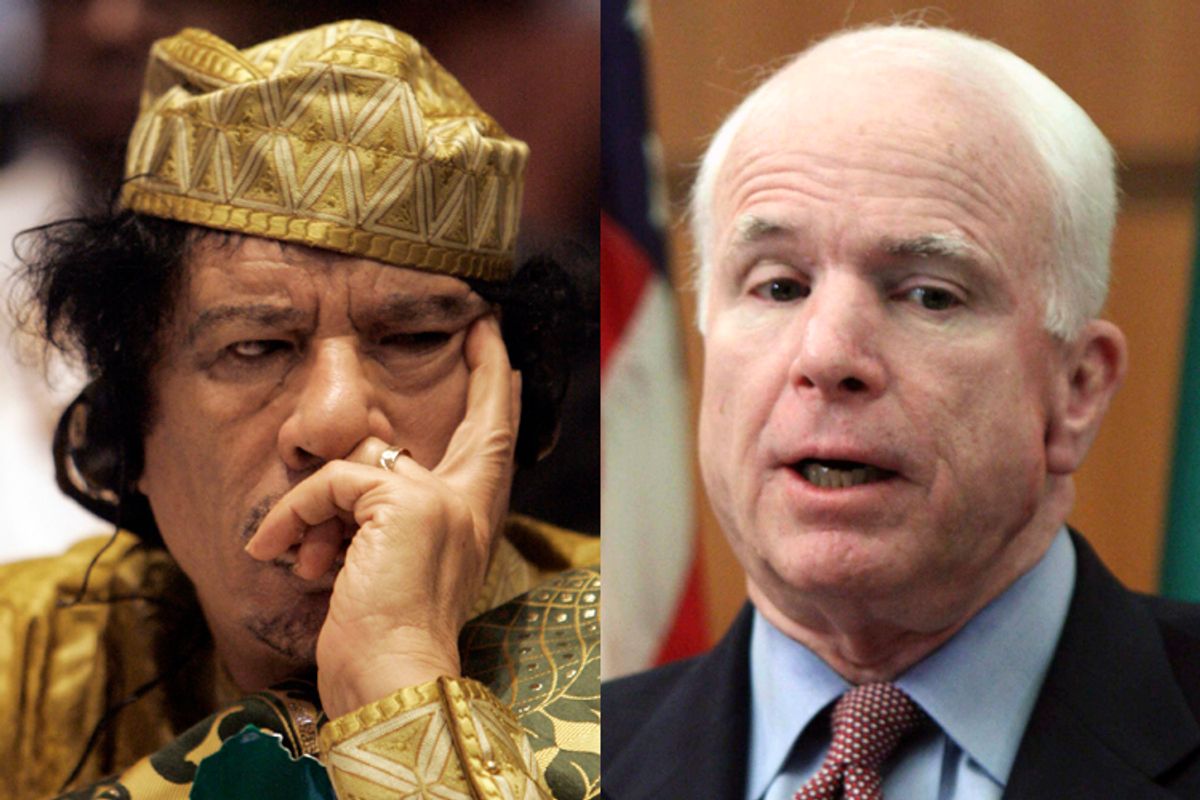 Should President Obama get credit for the imminent fall of the Moammar Gadhafi regime in Libya? Or should President’s George W. Bush’s neoconservative foreign policy be credited? True to form, Washington has boiled the complex issues surrounding the Libya intervention down to a simplistic question. But it’s a false choice. More than anything, Libya -- and the Arab Spring as a whole -- is showing the limited influence of the United States when compared to the power of the people in the region when they take charge of their own destiny.

The Libya experience pointedly shows the fallacy of the neoconservative thesis that talking to your enemies strengthens and legitimizes them. This argument was repeated so frequently during the Bush presidency that it became a truism. The United States shouldn’t talk to North Korea because that would be a concession. It shouldn’t talk to Iran, because Tehran does not deserve our company. And Washington should not talk to the Syrians because that would strengthen Assad’s rule.

Yet Bush did not shun the regime of Gadhafi. The Bush administration itself continued the secret negotiations with Tripoli that had begun under President Bill Clinton. After almost exactly seven years, a deal was struck. Libya gave up its nuclear program and the West began lifting its sanctions.

And it wasn’t just the United States. French President Nicholas Sarkozy, who credits himself for having been the force behind NATO’s decision to intervene in Libya, hosted Gadhafi in Paris in December 2007. Former British Prime Minister Gordon Brown tried to do the same in December 2008. He extended an invitation to Gadhafi to come to London, but a final date for the visit was never secured.

In fact, almost exactly a year ago, leading neoconservative Sens. John McCain, Joe Lieberman and Lindsey Graham met with Gadhafi in Tripoli and assured him "that the United States wanted to provide Libya with military equipment."

Neither these visits, nor the preceding diplomacy, secured Gadhafi from the wrath of his own people. It did not bestow upon his revolting regime a single drop of legitimacy. It simply remained its rotten, corrupt and dictatorial self.

The same was true for the regime of the Shah of Iran and Hosni Mubarak’s Egypt. The Shah was one of America’s closest allies. President Jimmy Carter toasted the Shah in Tehran on New Year’s Eve 1977, calling Iran an "island of stability" in a troubled Middle East. A year later, following a popular uprising, the Shah’s regime was no more.

Yet for all this experience in the Middle East, neoconservatives continue to assume that America is the universal source of legitimacy. Like King Midas, anything it touches -- or talks to -- is legitimized and turns into gold. Thus, to talk to another country is to do it a favor. And we should only do favors to our friends. Our enemies, we should defeat by force, not through conversation.

This line of thinking reveals three additional false notions, relevant not just to Libya, but also to the Arab Spring and to U.S. policy toward Iran.

First, that indigenous populations have essentially no ability to bestow legitimacy on their governments. America decides what is legitimate or not for them; they themselves have no say in this. The social contract is not between the populations and their state, but rather, between the state and the government of the United States.

Second, that if the United States ends up talking to an unsavory regime, that act, in and of itself, disenfranchises the local opposition and ensures the survival of the regime. Once Washington bestows legitimacy on the regime by talking to it, the internal opposition is left helpless and powerless.

Third, that the United States stands at the center of all political analyses. The United States is assumed to be -- contrary to all empirical evidence -- virtually omnipotent. All other actors are at best reacting to U.S. policy and thinking. There isn’t much distribution of power to speak of -- the United States holds (or should hold) most cards, and other states are left fighting for the bread crumbs that fall off Washington’s dinner table.

These assumptions invariably lead to Washington’s knee-jerk instinct to think that the U.S. government always has to do something. And that it is also responsible for almost all developments and outcomes. Taking a step back, observing developments, or showing patience are near treacherous acts according to this mind-set; hence the ferocious criticism of Obama’s handling of the Arab Spring.

As erroneous as this line of thinking is, it resonates strongly among large portions of the American public because it bestows on the United States a form of divine responsibility and strengthens the sense of American exceptionalism. (It is no coincidence that Obama has also been fiercely criticized for his remarks on the very phrase.) And it tends to win support among disgruntled exiled opposition groups as well because it provides them with an opportunity to exonerate themselves of any responsibility for independent leadership while putting additional responsibility on America’s shoulders.

Even the outcome in Libya ultimately shows that America’s ability to drive events in lands far away is limited at best. But shunning dialogue and diplomacy on the theory that we do our enemies a favor by talking to them only limits that influence further.