The iPhone and the Mac? Pfft. The story of Apple's founder amazes on a much more primal, redemptive level 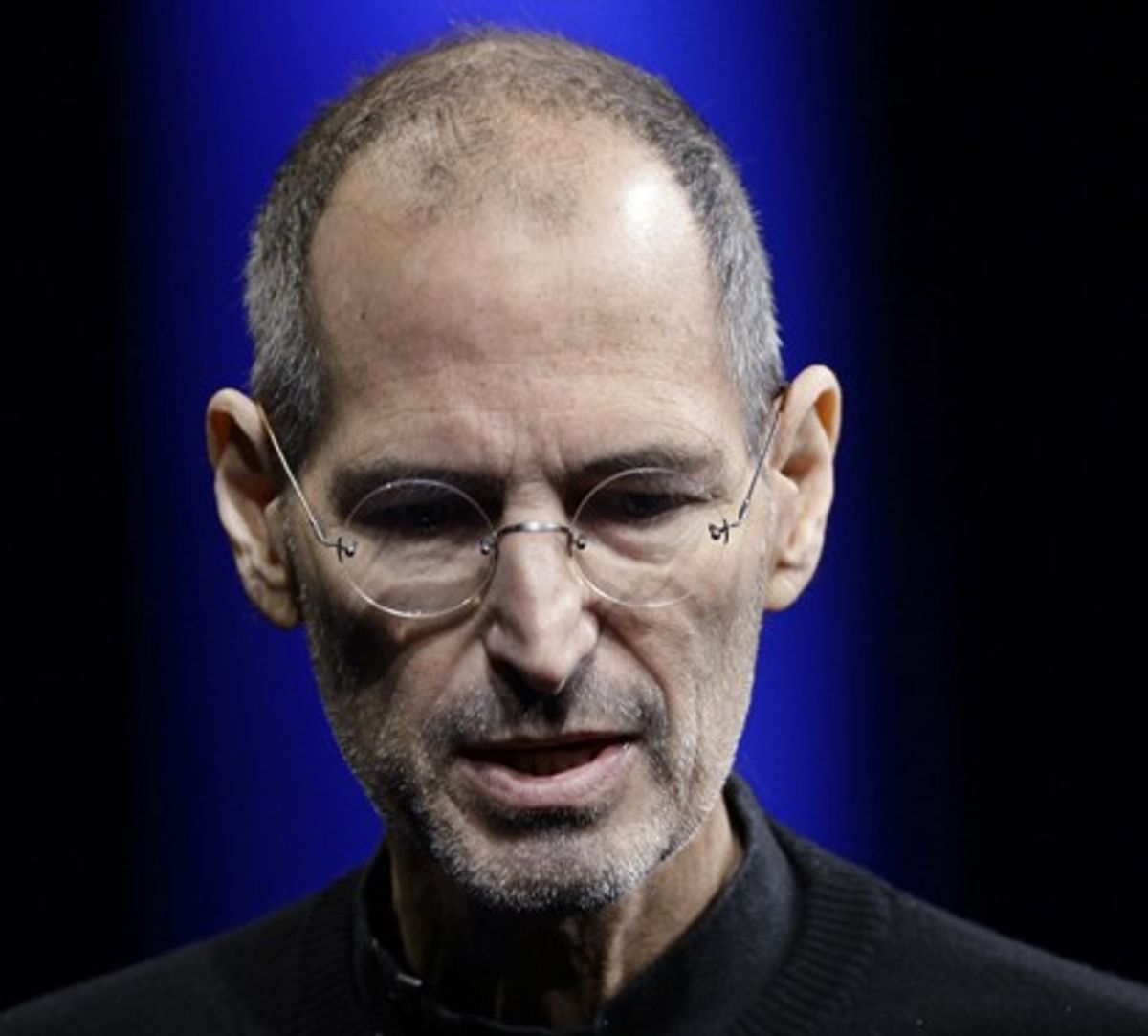 I've never seen a living man receive as many obituaries as Steve Jobs has in the last 24 hours, but I guess it's understandable. The first line of his letter to the "Apple Community" spells it out: "I have always said if there ever came a day when I could no longer meet my duties and expectations as Apple''s CEO, I would be the first to let you know. Unfortunately, that day has come." Those words are a sucker punch to the communal solar plexus -- it's impossible to imagine anything other than severe illness that would impel Jobs to step down from running the show -- except maybe a palace coup. And we've already been there, done that. There will be no reruns. Apple is currently the most successful and influential company on the planet -- nobody, anywhere, questions the quality of his leadership.

And that's what's so amazing about the Steve Jobs story. It's easy enough to rhapsodize over Jobs' incredible track record -- his accomplishments include the first great personal computer, the transformation of both the music and the telephone business, and the creation of one of the greatest movie-making studios of our time. Just writing that sentence is breathtaking. We will not see its like again. But for me, Jobs' career signifies something more primal -- his comeback saga is a story of redemption, a fantasy epic in which a great king is toppled, but through force of will and grit and brilliance fights his way all the way back to the throne, and inaugurates an even greater empire. It's hard to think of parallels. Mohammed Ali, maybe.

America loves underdogs and comeback kids and winners. Jobs' career arc fills all of those bills. You don't have to be a Windows guy or a Mac guy to appreciate this. All you have to do is love a great story. And the story of how Jobs got pushed out of Apple by a man he personally hand-picked to help run his company, how the company teetered perilously close to bankruptcy, and how Jobs came back to lead Apple to unthinkable success is one hell of an insanely great yarn.

For years I watched it from afar, locked into Microsoft's dreary ecology. When I purchased my first computer in the 1980s, I bought an IBM clone primarily because there was much better software for writing in Chinese available for PCs than Macs -- an unintentional consequence of Apple's successful war against Taiwanese hardware copycats. For years, I felt vaguely uncool in a Bay Area full of Mac cultists, but there was also a sense that I had inadvertently backed the right horse. The power of network returns made the PC/Windows world hard to beat. The availability of Chinese-language software was just the tip of the iceberg. If you were a serious gamer, you had to be on Windows, if you wanted the first rev of a breakthrough app, it was much likelier to be developed for Windows before Mac. On The Well, the online conferencing system where I started hanging out in the mid-'90s, huge flame wars would constantly erupt between Mac and Windows partisans, but I never felt the need to participate. The debate seemed moot. I felt no passion for my Windows machine, but for many years it just seemed like a default necessity.

But even from that vantage point, as a technology journalist in the Bay Area in the '90s, I felt sad about Apple's steady decline. Apple had character -- it was cool, it had been innovative, and its early success sent an inspiring message that you could be a freak and still change the world. You didn't have to be a button-down number-cruncher seeking to please the lowest common denominator. The slow death of Apple devastatingly undermined that narrative. As each month went by, and the news got worse from Apple, the epic "1984" advertisement that pictured the Mac overthrowing IBM's Big Brother seemed more and more risible. Big Brother had won.

And Steve Jobs' exile -- that just seemed grossly unfair. Every single time a company founder is forced out of his or her baby, it feels somehow wrong, even if, in many cases, it may be deserved. But the Steve Jobs debacle trumped every other example of corporate nastiness. The freak went down for the count while the button-downed sugar-water salesman took over.

Of course, no one ever said capitalism was supposed to be fair. Silicon Valley is littered with the carcasses of amazing start-ups that rose to fantastic heights and then crashed and burned. That's the way of the jungle! Only the strong survive! As the '90s marched on, it seemed clearer and clearer that nothing could stand against Microsoft, not even Bill Clinton's Justice Department.

And then the cat came back. Like many, I was skeptical, even if at a very basic level I rooted for Jobs to succeed -- I'm just as much a fan of the comeback kid as anyone. But I thought the iMac was a toy and became far more interested in the challenge posed to Bill Gates and company by Linux and the free software rebels. I dual-booted my Sony Vaio with Windows and Red Hat Linux and never looked back.

Today, I work on a MacBook Pro and I love my iTunes and maybe, just maybe, this weekend I'll finally break down and buy an iPhone. I'm certainly not crazy about everything Apple does as a company, but I cannot deny that it makes the most amazing computing products in the world, products that have profoundly improved the quality of my life.

Steve Jobs won. And in doing so, he has proved some important things in the process. You don't have to settle for less, you don't have to cater to the lowest common denominator, you don't have to be ruled by focus groups and market research. You might get knocked down, but if your will is strong, if you bear down and remain committed to your vision, you can get back up stronger than ever before. Steve Jobs is the anti-Icarus. He flew high, his wings melted and he crashed, and then he made new wings and flew even higher than before.

That's a myth I can get behind. There's a lot of sadness in the technology world today, but just the act of recapitulating Steve Jobs' rise and fall and rise again has me feeling inspired, and grateful. Thanks, Steve, not for the Apple or the Macintosh or the iPod or the iPhone or the iPad. Thanks for setting a great example. The world is what you make it.