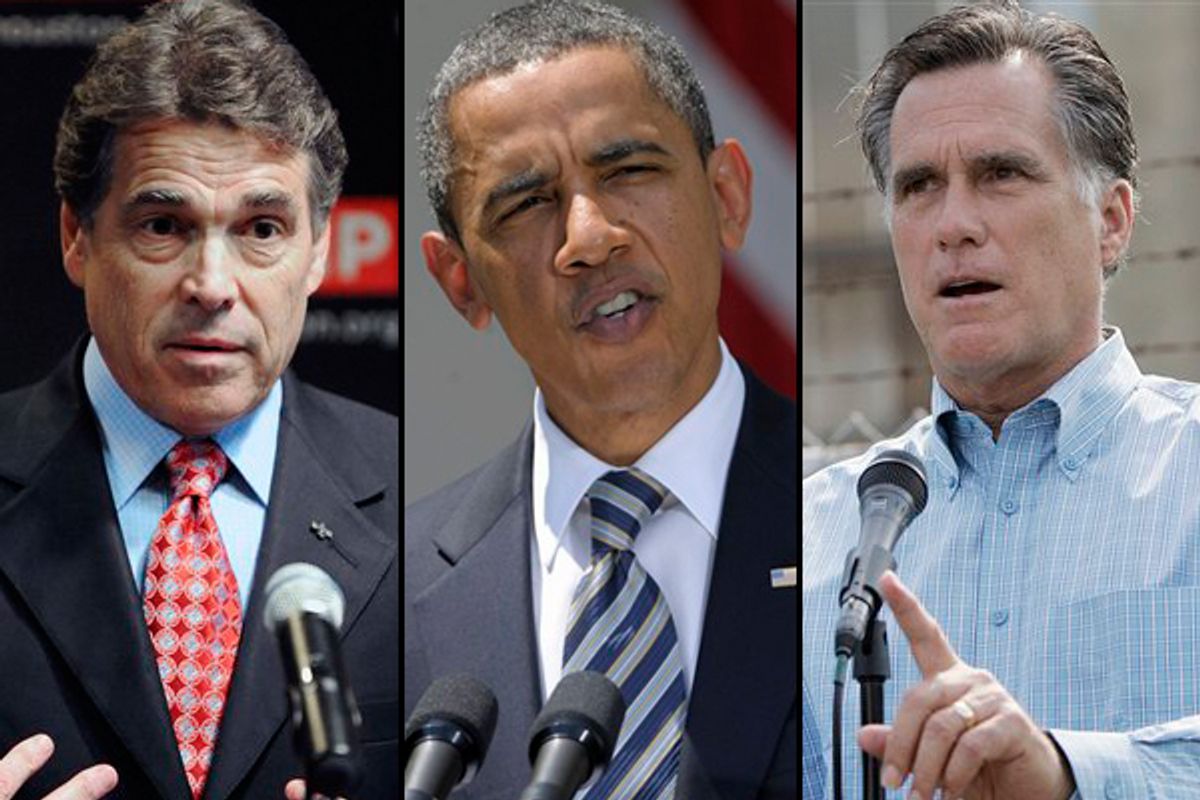 Unlike at this point in the presidential election cycle in 2007 (when we were looking at a Fred Thompson versus Hillary Clinton campaign), we basically know who the contenders will be next year. Barack Obama versus Mitt Romney or Rick Perry. Like this point in the last election season, though, we know what states it'll come down to: the "Swing States," roughly Florida, Ohio, Virginia, Colorado, North Carolina and Wisconsin. And maybe Nevada. And Pennsylvania and Iowa. But mainly the first list.

So let's look at the polls, helpfully aggregated by Real Clear Politics, and see how Obama's doing versus his likely challengers in the only states where votes actually will count.

Barack Obama's job approval ratings are in the toilet, nationally and in every battleground state (because no one has a job). But his personal favorability ratings remain relatively high, and no one has much warmed up, personally, to Mitt Romney. The voters have not yet really gotten to know Rick Perry.

Most of the early general election polling in battleground states has been done by Public Policy Polling, a Democratic polling firm that was praised for accuracy in 2008, but one that practices automated polling of registered voters, instead of "likely voters." The basic picture right now is of an electorate that likes Obama a bit more than his rivals, but whether the people who like him more than his rivals will actually go out and vote for him will depend on a lot of factors, including whether Obama manages to convince Congress to send every American a $1,000 check to pay off their mortgages and buy groceries while looking for work. (This will probably not happen.)

As always, Obama needs Florida. He needs it so much. Ohio would be nice, but it's tougher.

There's one very recent Florida poll, from Magellan Data & Mapping Strategies poll. The poll of 723 likely general election voters finds that Obama is unpopular, along with most of the people he's running against. The Orlando Sentinel sums up the results:

Despite the luke-warm feeling for the Republicans, the surveyed voters said matchups would have Romney beating Obama 49-39, Bachmann winning 43-42 and Perry 46-39.

Losing to Bachmann! Rough. Florida polls done since June show Obama losing to Romney by anywhere from 1 to 10 points. He led against Perry before Perry's official entrance into the race. (Though Perry could surge now and then lose support once everyone hears about how much he hates Social Security.)

Only Public Policy Polling and Quinnipiac have polled Obama versus Republicans in Ohio, with Quinnipiac's poll taking place early in mid-July. The president is beating Rick Perry as of Aug. 14, has yet to poll below Romney, and probably doesn't need to worry about Michele Bachmann.

Obama probably won't win North Carolina again, but considering that he did win it last time, it's worth taking a quick look.

Public Policy Polling has yet to show Obama losing to Romney. Obama and Romney were tied in early July, but mostly the president's been leading by between 1 and 3 points. Surprisingly, Obama has an 8-point lead on Perry according to a PPP poll from early August. A July 12-13 poll of registered voters by Civitas showed Perry leading 45-42. PPP has Obama beating Bachmann and Palin by double digits in their most recent polls.

According to two PPP polls with tiny samples, Barack Obama is beating Mitt Romney with 48 percent or 47 percent of the vote to Mitt's 41 percent. As of August 4-7, Rick Perry's name was enough to get Obama to crack 50 percent, a rarity in all early battleground state polls posted so far. Same with Bachmann.

Will old/Southern Virginia rise again, sending George Allen back to the Senate and propelling a white Republican back into the White House? Or will those dope-smoking liberals of northern Virginia prevail? So far, the dope-smokers are looking pretty good. In July, PPP has Obama on top of Perry 48-39. He was beating Bachmann 49-40. And Romney's making it close, but Obama's leading 47-43. (In the one non-PPP poll, conducted by the Washington Post in May, Obama led Romney 50-44.)

Who even wants to predict things in Wisconsin anymore? In one PPP poll, Obama is handily beating Rick Perry by 10 points, and he's ahead of Romney by 5.

It's a bit surprising, given Obama's awful approval ratings, that he still (very barely) beats most of his challengers head to head in state polls. But the general election hasn't yet begun, and many Americans very correctly refuse to pay attention until they have to.

Right now I'm thinking the GOP is nuts to be looking for someone "better" than Mitt Romney, though Rick Perry's performance in the next couple of months will determine whether that's the case. (Once everyone realizes he talks exactly like George W. Bush he'll surely lose this thing, though.)