The problem is Texanism -- not Texans

Talking up secession while taking more than $6 billion in stimulus cash from Obama? Pure Texanism in action 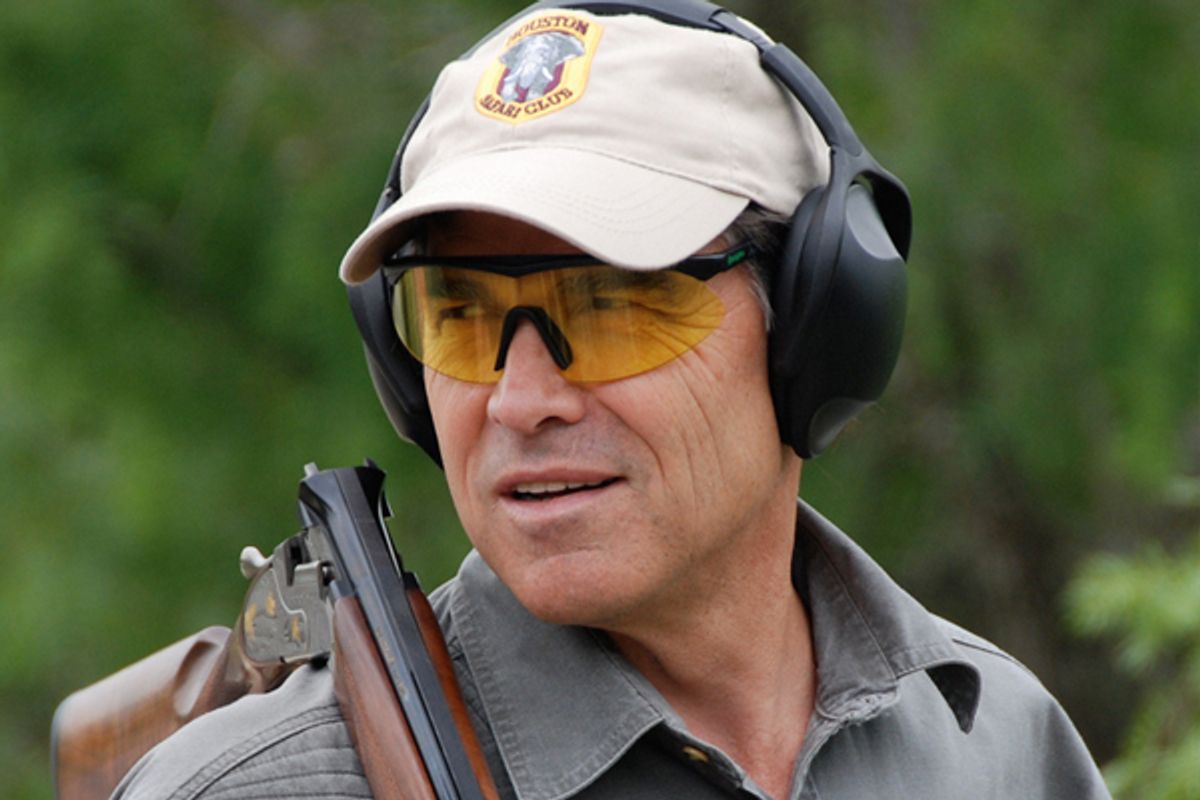 Having recently written that many Republicans yearn for a tough-guy presidential candidate because they yearn to punish somebody, I knew what to expect: a barrage of insulting emails from anonymous tough guys yearning to punish me personally.

Many feature sexual taunts and the kinds of scatological imagery scrawled on honky-tonk bathroom walls. I'll spare you the details.

Hey, it comes with the territory. Aiming to be provocative, I can't complain when readers are provoked. When they cross the line into overt threats, it's my policy to warn them that they've committed a crime, although I only turn in repeat offenders. That sometimes brings apologies. The police will tell you that people who make email and telephone threats are blowhards anyway.

Because the tough guy candidate I criticized is a Texan, I also anticipated a certain amount of the "Big Me/Little You" theme that some there find irresistible. "You, like most people from Arkansas, are both jealous and afraid of anybody from Texas," one braggart opined.

Actually, my all-time favorite Texas joke concerns the time somebody proposed building a pipeline to divert water from the Arkansas River to irrigate cotton fields around Lubbock. "Just give 'em a 900-mile straw," people said. "Then if they can suck as hard as they blow, no problem."

You can also bet your genuine George W. Bush 14-inch action figure (flight suit model) that they intended to finance the boondoggle with federal tax dollars. That's the kind of thing you don't hear a lot about when "states' rights" guys like Gov. Rick Perry sound off.

See, it's not Texans but the ideology of Texanism that's the problem. Another Lone Star patriot favored me with a bunch of insulting messages premised upon the widely believed fiction that Perry refused federal stimulus funds, resulting in an economic boom.

In fact, Texas financed $6.4 billion of its $6.6 billion budget shortfall in fiscal years 2010 and 2011 with cash from President Obama's 2009 Recovery Act. On the same day Perry accepted the funds, he set up an online petition titled "No Government Bailouts." Pure Texanism in action.

Alas, I couldn't persuade my correspondent to read news stories documenting those facts.

As for that economic boom, another indisputable fact is that unemployment rates in Texas are higher than in any neighboring state -- Arkansas and Louisiana included. What's more, due partly to Texas' draconian 2012-13 budget, joblessness there is trending higher, from 8.1 percent to 8.4 percent this month.

Still another fellow informed me that if I'd ever had the good fortune to live in Texas, I wouldn't be such a cynic. (A cynic perhaps defined as anybody who notices that Gov. Perry used to have a lot of gray in his hair.)

Ah, but I've both lived and worked there. During what climatologists call the Medieval Warm Period, I taught at the University of Texas. I owe much of whatever reputation I've earned in journalism to Texas Monthly magazine. I've been all over the place, from Amarillo to Rio Grande City, El Paso to Texarkana.

Indeed, because I raise cattle, I've been thinking a lot about people I've met in Texas towns like Mason, Rockdale and New Braunfels. Here in Arkansas, our relatively moderate drought broke a couple of weeks ago. But it was scary enough to give me some feeling for the slow-motion agony many Texans are feeling: watching the grass die, the ponds dry up and the animals suffer.

What are political opinions next to that? Almost nothing, it seems to me.

That said, many blame the Internet for the perceived coarsening of public dialogue. (Although the only truly disturbing messages I've ever received -- vivid fantasies of murder and dismemberment -- arrived from Florida via U.S. Mail.)

It's definitely true that anonymity's a big part of it. Certainly nobody ever talks to me, or to anybody else, in person the way people do in emails. The instantaneous nature of Internet communication also encourages people to let fly. Slanging matches erupt among pseudonymous antagonists in online comment threads that would lead to violence face to face.

But there's more to it than that. Hard times and fear lead to black and white thinking and a hatred of "the Other." At times, reading my email can be like eavesdropping on therapy sessions. "I like feeling superior and more wise than you," one fellow confides. "You are a scared little man with no heart ... Just a little wimpy leftist."

Virility and humiliation are omnipresent themes, a veritable catalog of adolescent revenge fantasies. It's remarkable how many remain obsessed with Bill Clinton's sins -- real and imagined.

Heaven knows there are loons and crackpots on the left, but nothing like the kind of focused outrage that's building on the populist right. It seems to me that it's going to be a very long time until November 2012.