The war against the unemployed 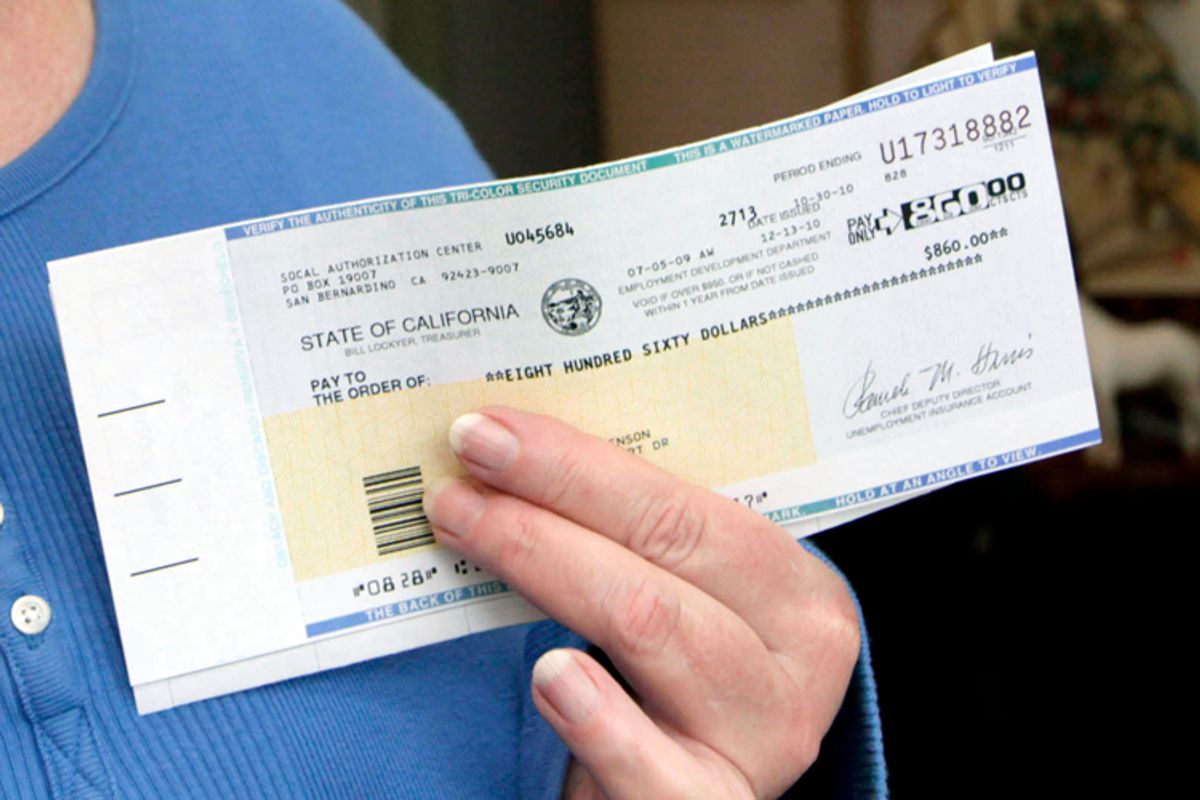 In this Dec. 17, 2010 photo, Theresa Christenson holds an unemployment check in her home in Burbank, Calif. Before she was laid off from a quality assurance job at Yahoo in July 2009, Christenson earned around $100,000 a year. The 58-year-old has managed to hang on to the 4-bedroom house that she co-owns with her sister, where they've lived for 22 years. "It really gets me when they say 'you lazy people,'" says Christenson, who lives on $1,720 a month in unemployment insurance benefits and what's left of her dwindling 401K. "They have no idea how depressing that is when you have been beating your head against the wall, trying to find work. (AP Photo/Nick Ut) (Nick Ut)
--

Unless Congress takes action, as many as 3 million Americans could lose their unemployment benefits shortly after the end of 2011, when federal unemployment benefit extensions expire. For many Republican legislators, at both the state and federal level, that day can't come a moment too soon. Who can forget Arizona Sen. Jon Kyl's famous declaration last March that "if anything, continuing to pay people unemployment compensation is a disincentive for them to seek new work"?

If anything! Never mind the hardship that the 6.8 million people thrown out of work by the great recession are suffering. Never mind the powerful stimulative effects that result from the speedy injection of unemployment benefit payouts right back into the overall economy. Never mind the gross immorality of ensuring that the rich pay as little taxes as possible while the poor are left without a safety net. The emerging conservative orthodoxy holds that paying out benefits just encourages Americans to be lazy. End of story. The fact that the United States is still reeling from the greatest economic disaster since the Great Depression and verging perilously close to a double-dip recession makes no difference. At the state level, the crackdown has already begun. A half-dozen states, with Florida leading the way, have already cut back on benefits while at the same time forcing the unemployed to jump through numerous, onerous hoops just to qualify for a check.

What explains the disparity? Rothstein told me that Barro looked at the number of people who currently fall into the category of long-term unemployed, compared it to the much smaller number of people who fit that category at a similar point after the 1981-83 recession and simply assumed that extended unemployment benefits accounted for all of the difference (even though the overall number of long-term unemployed had been rising long before the onset of the Great Recession.) But such reasoning ignores the substantial differences between the recession during Reagan's first administration and the current slowdown. Reagan's recession was largely artificially induced by Paul Volcker's efforts to quash inflation. Once Volcker started lowering interest rates again, the economy zoomed back up.

The Great Recession was something completely different, the result of a massive housing bust and a catastrophic financial crisis. Recovery has been slow, and even now, hampered by a wide array of global problems. Even today, there is still only one job available for every five job seekers. No matter how many hoops one makes job seekers jump through to get unemployment benefits, states are not going to be able to get their citizens to find jobs if none are available.

"It's just not plausible that anyone is going to turn down a job offer just to stay on unemployment another few months," says Rothstein.

If one accepts the much smaller figures offered by Goldman Sachs, the SF Fed, and Berkeley's Rothstein, then the resulting calculus becomes even more weighted against the conservative position. Because it only makes sense to balance the small negative impact that unemployment benefits might have on the unemployment rate with the relatively large impact unemployment benefits have as a stimulus measure. In January 2010, the Congressional Budget Office evaluated 11 policy proposals for stimulating the economy and concluded that out of all of them, extending aid to the unemployed got the most bang for the buck.

With another recession looming, extending unemployment benefits again shouldn't even be on the bargaining table. But even as winter threatens, you can bet your last dollar that Republicans will be even more unwilling, this time around, to extend a helping hand to the millions who lost their jobs through no fault of their own, and who are struggling to feed their families and keep a roof over their heads.

Compassion, anyone? Unfortunately, just doing the right thing has never been very easy to fit into a neoclassical economic model.