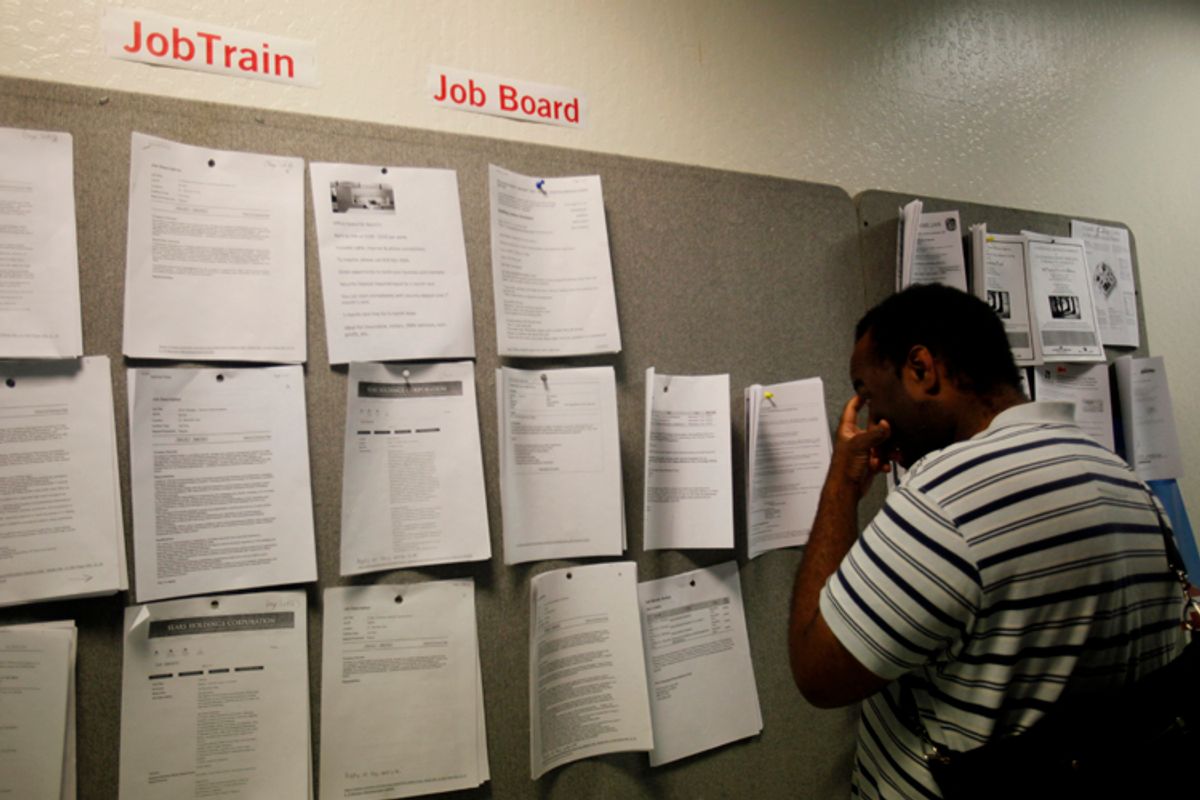 In this photograph taken July 20, 2010, Orlando Payton looks for work at JobTrain employment office in Menlo Park, Calif. The recovery lost momentum in the second quarter as growth slowed to a 2.4 percent pace, its most sluggish showing in nearly a year and too weak to drive down unemployment. (AP Photo/Paul Sakuma) (Paul Sakuma)
--

Republican guru Karl Rove recently appeared on Fox News to dispute the idea that America is a "Christian nation." And he was right to do so, but not because our country lacks an overarching canon. We certainly do have a national religion -- it's just not Christianity. It's Denialism.

Some branches of this religion deny the science documenting humans' role in climate change. Others deny tax cuts' connection to deficits and deregulation's role in the recession. But regardless of the issue, Denialists all share a basic hostility to facts.

As this know-nothing theology expands, none of its denominations claims a bigger membership than the one obsessed with race. Today, many reject the fact that black people typically face bigger obstacles to economic and political success than whites. Instead, they insist that whites are oppressed.

The late Democrat Geraldine Ferraro first floated this specific fable in 2008, when she said that Obama was "very lucky" to be black and that "if Obama was a white man, he would not be in [his] position." Obama rightly noted that "anybody who knows the history of this country ... would not take too seriously the notion that [being black] has been a huge advantage."

But the meme nonetheless persists. In May, Rep. Joe Walsh, R-Ill., said Obama's election "comes back to who he was: he was black." Now, it's Sen. Tom Coburn, R-Okla., who last week declared that "as an African American male," Obama received a "tremendous advantage from a lot of [government] programs."

Though Coburn's dog-whistle racism is (sadly) mundane, his statement is news because of its timing.

In the same week the Oklahoman insinuated that government gives African-Americans a "tremendous advantage," the New York Times reported on data showing black scientists are "markedly less likely" to win government grants than white scientists. A few weeks earlier, the Pew Research Center had reported that "the median wealth of white households is 20 times that of black households."

This truth is everywhere. You can see it in black unemployment rates, which are twice as high as white unemployment rates -- a disparity that persists even when controlling for education levels. You can see it in a 2004 MIT study showing that job-seekers with "white names receive 50 percent more callbacks for interviews" than job seekers with comparable résumés and "African American-sounding names." And you can see it in a news media that looks like an all-white country club and a U.S. Senate that includes no black legislators.

Denialists imply that this is all negated by Obama's success. But while his rise to the Oval Office certainly was an achievement, Obama was correct when, upon becoming Harvard Law Review's first black president in 1990, he said, "It's crucial that people don't see my election as somehow a symbol of progress in the broader sense, that we don't sort of point to a Barack Obama any more than you point to a Bill Cosby or a Michael Jordan and say 'Well, things are hunky dory.'"

Of course, things aren't "hunky dory" for most people in this recession -- but they are particularly awful for black Americans. Unfortunately, if you refuse to acknowledge that truth, there's a whole Church of Denialism ready to embrace you.