Why I was wrong about DSK

I used to think the case against Dominique Strauss-Kahn should move forward. The facts made me change my mind 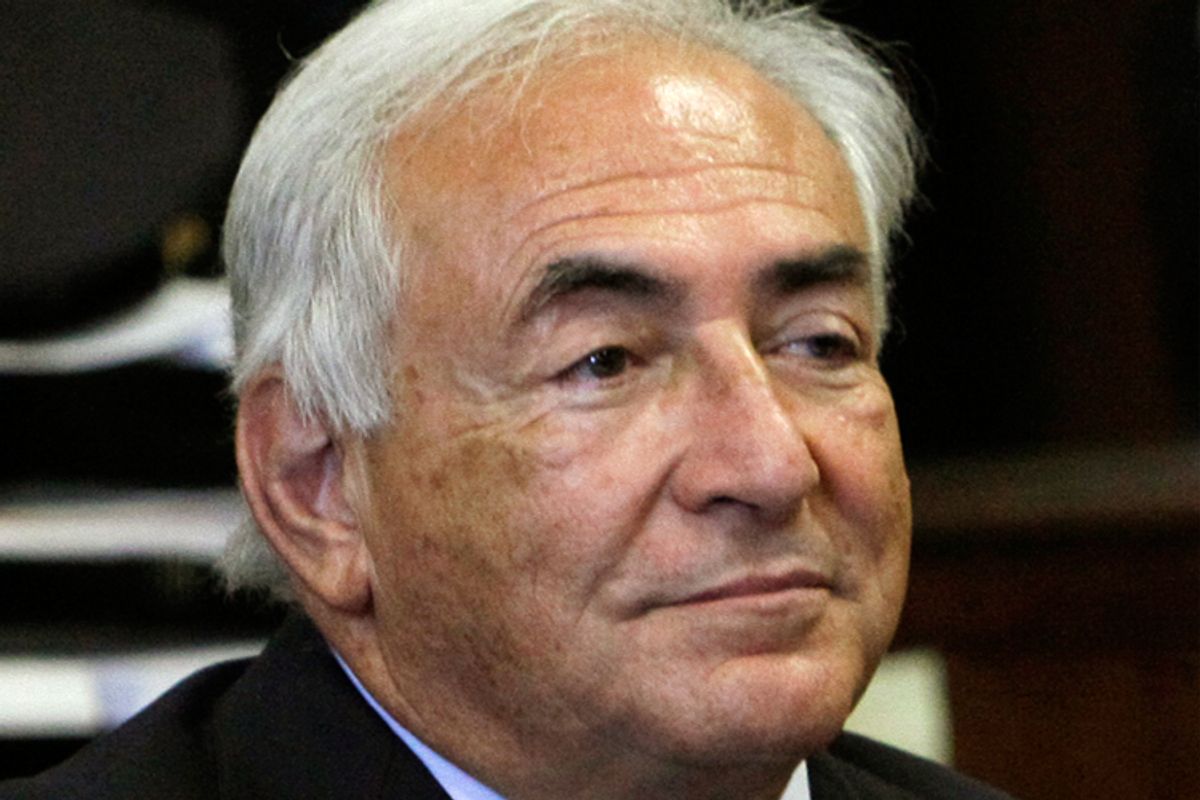 On Wednesday, I wrote a piece titled "The case against the DSK dismissal." I started out skeptical about feminist push-back against the district attorney's decision to drop the case against the former International Monetary Fund chief -- but I felt guilty about that, so I reconsidered. As is usually the case when emotions and politics grab the wheel, I realize now that I've ended up at a dead-end, and I'd like to make a U-turn and return to where I started. In the interest of intellectual honesty, allow me to debunk myself.

The DNA evidence alone does not prove that a non-consensual sexual encounter took place. In order for there to be any hope of proving Dominique Strauss-Kahn's guilt beyond a reasonable doubt, a jury would have to put some trust in Nafissatou Diallo. However, as the D.A.'s office wrote in its brief, "the complainant's credibility cannot withstand the most basic evaluation." She has changed her accounting of events -- some of which might be explained by trauma or translation issues -- but the sum total of her conflicting accounts and false statements under oath led prosecutors to conclude that she had no chance of withstanding cross-examination.

Most importantly, it isn't just that prosecutors no longer believed that they could win the case -- they themselves no longer believed Diallo beyond a reasonable doubt. As Bennett Gershman, a former Manhattan prosecutor, told the Wall Street Journal, "A prosecutor can't go ahead with a case where he doesn't believe the complaining witness. He can't ethically proceed with that case." This is a fundamental precept of our legal system. Rape is arguably a special crime -- that's why we have shield laws and the like -- but there is no reason that prosecutors should be held to a lesser standard in such cases than in other criminal trials. As a friend of mine who is an attorney with experience in prosecutors' offices wrote me in response to my original piece, "I don't think lowering the burden of proof we want prosecutors to reach in their own minds before bringing criminal charges is a good answer to the criminal and cultural problems involving rape."

None of this is to say that DSK himself is a credible witness. He lied about having a sexual encounter of any sort with Diallo until presented with physical evidence. But the burden of proof rests with the prosecution. The issue isn't the truth of what happened in that hotel room but rather provable truth, as CNN legal analyst and New Yorker writer Jeffrey Toobin argued. That's how our legal system works. The fact that she has lied, even about rape, in the past does not rule out the possibility that she was sexually assaulted by DSK -- but it did critically damage her case, given that it largely relies on her testimony. (The physical evidence alone does not prove sexual assault.)

A compelling argument against the dismissal is that Manhattan District Attorney Cyrus Vance Jr. merely cut his losses based on personal political calculations (better to dismiss the case now than to endure the humiliation of defeat). The cynical view of prosecutors more interested in victories than justice is sometimes easy to hold -- but as a D.A., Vance is supposed to pursue cases where he believes that guilt is provable beyond a reasonable doubt. Prosecutors aren't expected to go ahead with a trial they think is un-winnable simply out of the goodness of their hearts. (Now, it's possible that his own self-interest distorted how he weighed the odds of a win, but even those most vocally arguing against the dismissal admit that the case had little chance.)

That brings me to the very real concern that this outcome will have a negative impact on victims' willingness to report rape. Legitimate as this concern may be, though, it isn't relevant to the decision to dismiss this particular case. Ideally, trials should arise from the facts at hand, not the larger cultural message such a trial might send.

The question isn't whether DSK is guilty or innocent. It's whether the guiding principles of our legal system support the trial's dismissal -- and in the end, they do.