The storm, now a Category 2, still has the East Coast on edge 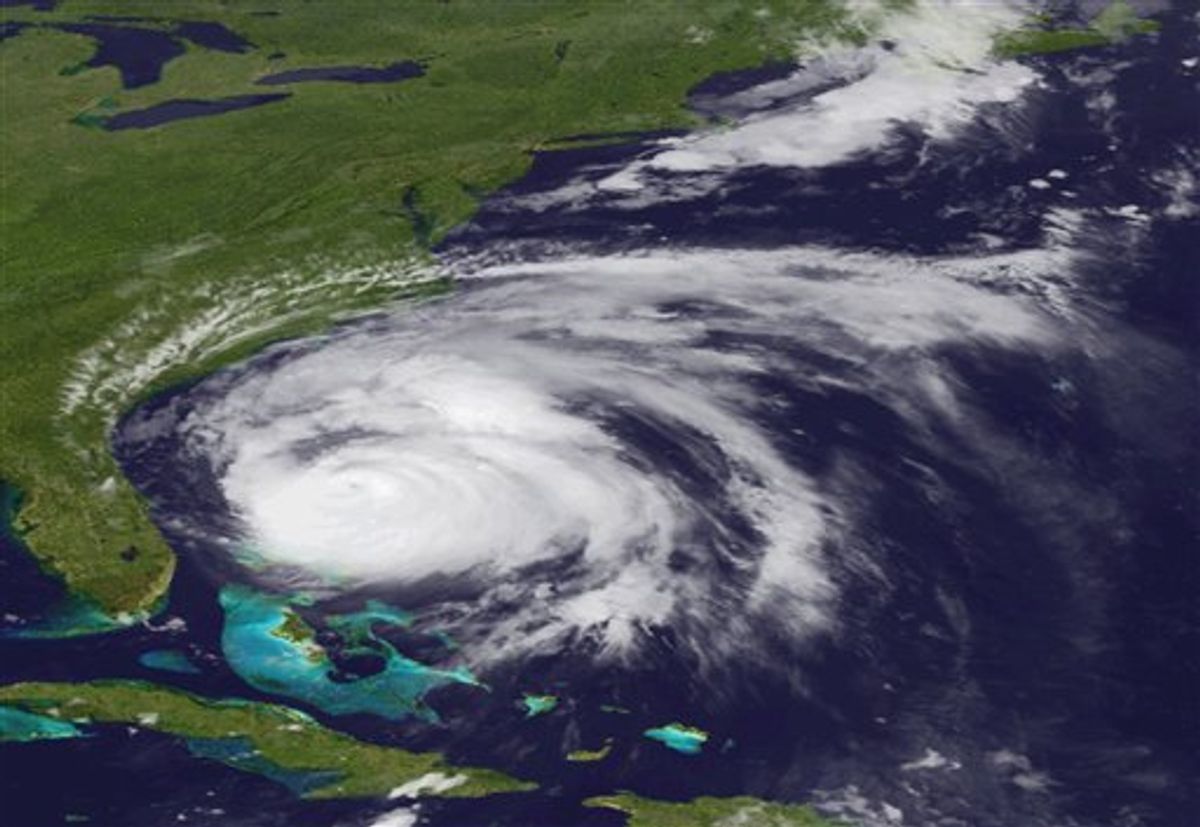 An image provided by NOAA is an Aug. 26, 2011 view of Hurricane Irene made by the GOES-east satellite. The hurricane is projected to follow a path up the East Coast from North Carolina to Maine and into Canada. (AP Photo/NOAA) (AP)
--

Hurricane Irene's main thrust was still a day away from North Carolina but heightened waves began hitting the state's Outer Banks early Friday as the storm continued trudging toward the East Coast.

Swells from Irene and 6 to 9-foot waves were showing up and winds were expected to begin picking up later in the day, said Hal Austin, a meteorologist with the National Weather Service.

Meanwhile, the hurricane warning area was expanded and now covered a large chunk of the East Coast from North Carolina to Sandy Hook, N.J., which is south of New York City. A hurricane watch extended even farther north and included Long Island, Martha's Vineyard and Nantucket, Mass.

For hundreds of miles, as many as 65 million people along the densely populated East Coast warily waited Friday for a dangerous hurricane that has the potential to inflict billions of dollars in damages anywhere within that urban sprawl that arcs from Washington and Baltimore through Philadelphia, New York, Boston and beyond.

Irene weakened slightly Friday, dropping down to a Category 2 storm with maximum sustained winds near 110 mph (175 kph). But some re-strengthening was possible and the storm was expected to be near the threshold between a Category 2 and 3 storm as it reached North Carolina's coast, the National Hurricane Center said.

In North Carolina, traffic was steady Friday as people left the Outer Banks. Tourists were ordered to leave the barrier islands Thursday and many residents were following as ordered Friday.

At a gas station in Nags Head, Pete Reynolds said he wanted to make sure he had enough fuel for the long trip. The retired 68-year-old teacher spent part of Thursday getting his house ready for the hurricane. Now, he and his wife, Susan, were heading to New Jersey area to stay with their son's family.

"We felt like we would be OK and we could ride out the storm," said Reynolds, who lives in Nags Head. "But when they announced mandatory evacuations, I knew it was serious."

Speaking Friday on CBS' "The Early Show," North Carolina Gov. Beverly Perdue said the state has Highway Patrol Troopers, the Red Cross and National Guardsmen in place to deal with the storm's aftermath. But she warned coastal residents not to risk waiting out the storm and hoping for help after it passed.

"You can't count on that. Folks need to decide that they need to get out now," she said.

North Carolina was just first in line along the Eastern Seaboard -- home to some of the nation's most heavily populated areas and some of its priciest real estate. Besides major cities, sprawling suburban bedroom communities, ports, airports, highway networks, cropland and mile after mile of built-up beachfront neighborhoods are in harm's way.

"One of my greatest nightmares was having a major hurricane go up the whole Northeast coast," Max Mayfield, the National Hurricane Center's retired director, told The Associated Press on Thursday as the storm lurched toward the U.S. "This is going to be a real challenge ... There's going to be millions of people affected."

The hurricane would be the strongest to strike the East Coast in seven years, and people were already getting out of the way. After dousing the Bahamas, it was again moving over warm Atlantic waters that will energize it.

Hundreds of thousands of New Yorkers were told Thursday to pack a bag and be prepared to move elsewhere. The nation's biggest city hasn't seen a hurricane in decades.

Farther south, tens of thousands packed up and left North Carolina beach towns and farmers pulled up their crops.

North Carolina farmer Wilson Daughtry has lost count of how many times his crops have been wiped out by storms that regularly blow up from the tropics.

"That's the price of living in paradise," he said of a fertile farm belt that's weathered an unusually hot and dry summer. Any deluge from Irene's rain bands could wipe out many crops just when they are ready for harvesting.

"We're going to have damages, we just don't know how bad," Craig Fugate told AP as FEMA readied plans in many states. "This is one of the largest populations that will be impacted by one storm at one time."

Latest forecasts had Irene crashing up the North Carolina coastline Saturday, then churning up the East while drenching areas from Virginia to New York City before a much-weakened storm reaches New England.

Even if the winds aren't strong enough to damage buildings in a metropolis made largely of brick, concrete and steel, a lot of New York's subway system and other infrastructure is underground and subject to flooding in the event of an unusually strong storm surge or heavy rains, authorities noted.

New York City's two airports also are close to the water and could be inundated, as could densely packed neighborhoods, if the storm pushes ocean water into the city's waterways, officials said. The city had a brush with a tropical storm, Hanna, in 2008 that dumped 3 inches of rain in Manhattan.

All told, Irene could cause billions of dollars in damage or more along the Eastern Seaboard in a worst case scenario, said Kathleen Tierney, director of the Natural Hazards Center at the University of Colorado.

In the last 200 years, New York has seen only a few significant hurricanes. In September of 1821, a hurricane raised tides by 13 feet in an hour and flooded all of Manhattan south of Canal Street, the southernmost tip of the city. The area now includes Wall Street and the World Trade Center memorial.

New England is also unaccustomed to direct hits from hurricanes. Maine lobsterman Greg Griffin, who fishes from Portland, Maine, still recalls the clobbering when Hurricane Gloria struck in 1985 and said this one is not one to ignore after years without a large, dangerous storm.

"We have a young generation of lobstermen who've never experienced a full-blown hurricane," Griffin warned.

The first U.S. injuries from Irene appeared to be in South Florida near West Palm Beach where eight people were washed off a jetty Thursday by a large wave churned up by the storm.

In Washington, Irene dashed hopes of dedicating a 30-foot sculpture to the late Martin Luther King Jr. on the National Mall on Sunday with the help of President Barack Obama. While a direct strike on the nation's capital appeared slim, organizers said the forecasts of wind and heavy rain made it too dangerous to summon a throng they initially expected to number up to 250,000 strong.

Heavy rain and possible floods were big worries in the Northeast. The potential for flooding and wind damage are Irene's greatest threats to Rhode Island, still smarting from the 2010 spring floods that devastated parts of the Ocean State.

In Connecticut, Gov. Daniel P. Malloy declared a state of emergency and warned there could be prolonged power outages if Irene dumps up to a foot of rain on already saturated ground as some fear. He said emergency responders must be ready in event of any evacuations from heavily developed urban areas.

"We are a much more urban state than we were in 1938," he said, referring to the year that the so-called "Long Island Express" hurricane killed 600 people and caused major damage with 17-foot storm surges and high winds.

The beach community of Ocean City, Md., was taking no chances, ordering thousands of people to leave.

"This is not a time to get out the camera and sit on the beach and take pictures of the waves," said Maryland Gov. Martin O'Malley.