The first joint effort between the two troupes feels like an ad. So why is it getting a free pass from critics? 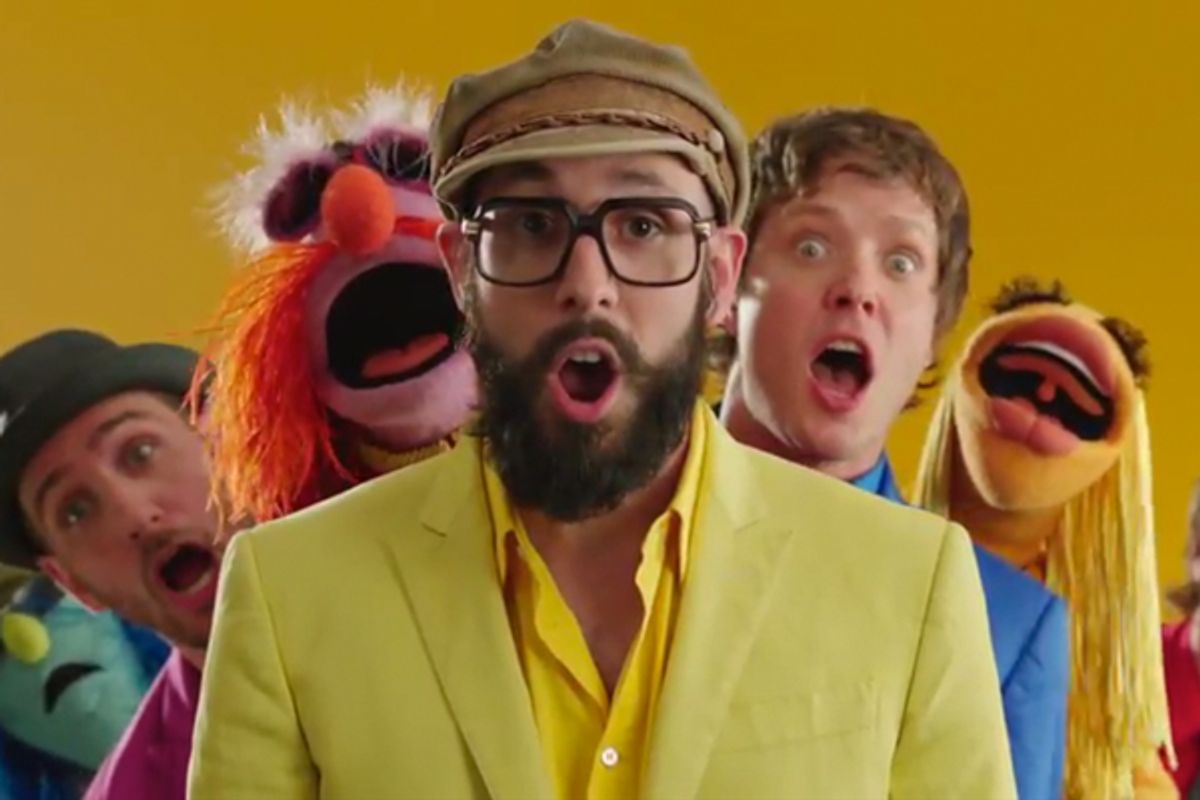 In theory, OK Go and the Muppets should be like peanut butter and chocolate -- a perfect combination. But their first collaboration -- a viral video remix of the theme to "The Muppet Show" -- left me with a sour aftertaste. OK Go creates videos that turn bold choreography and low-tech cleverness into dazzling spectacle; I raved about them here -- and the Muppets' recent reinvention for YouTube was one of the most delightful brand reboots in memory. Some of the newer Muppet clips are as strong as the best sketches and musical numbers on the original "Muppet Show." They recapture the surreal counterculture edge that the characters used to sport back in the days when the late Jim Henson was still committed to vaudeville and TV and hadn't yet gotten distracted by the siren song of big-budget fantasy filmmaking.

So why does this new video feel so disappointing? And why does almost everyone seem to be giving it a pass?

My gripes are inconsequential, of course, because the clip -- which was made in support of "The Green Album," a collection of Muppet music covers by various hip bands, including OK Go -- is already a huge success. It has drawn nearly 3 million views since it went up this week, and the media response has been overwhelmingly positive. "The combination produced a video adorable enough to put a smile on almost anyone's face," wrote Sarah Bermak of the Toronto Star. "The whole thing is a grinning technicolor marvel," wrote Entertainment Weekly's Kyle Anderson.

But really, now: If you put this "Muppet Show" theme clip up against any OK Go video, or almost any Muppet musical number, past or present, it would wilt in the face of all that creativity and charm.

For one thing, it's too blatantly an ad for OK Go and the Muppets as brands, rather than a self-contained work that has a life apart from its P.R. function. It's celebrating the band and the Muppets as properties, not as performers. The video's story line, such as it is, takes the Muppets on an abbreviated tour of previous videos by OK Go, stirring in bits of disruptive, anarchic humor from the Muppets. But the two troupes never seem to mesh. The video never quite finds the right surreal/deranged groove, which is odd considering that it's a collaboration between artists who pride themselves on upbeat nuttiness. The final leg of the video -- a series of bits wherein characters realize they're dreaming, wake up and scream into the camera -- plays like a desperate attempt to finish a piece that no one could quite figure out how to wrap up. The device of having one band member or Muppet start to sing, only to be interrupted by another character, is also weak; it's the kind of thing that a music video does when it can't devise anything better. There's a whiff of student filmmaking to the whole affair. Bummer, that.

Another problem: The whole thing is just too slick. One of the talents that the Muppet Studios and OK Go share is an ability to do more with less. The band made dancing on treadmills as thrilling as the most lavish Hollywood action sequence, and the Muppet gang had so much faith in the charisma of their characters that they could let Kermit do an exuberant tap dance routine even though he had no visible legs (which was, of course, the heart of the joke). The marvelous "handoff" gags that OK Go perfected in their videos -- elaborate bits of choroegraphy that allowed the various gags to flow seamlessly into each other, like elements in a Rube Goldberg contraption -- have no actual equivalent here. Everything is done through cuts, and there's so much digital compositing and glitzy special effects work that it all feels more machine-tooled than handmade. All of which would be fine if the video had a good idea at its core. But it really doesn't. It's just a likable joint advertsement for entertainment companies, one established, the other fairly new. What do you think?

At least Statler and Waldorf are there to articulate the feelings of grumps like me.