When Mitt Romney gets frustrated with women 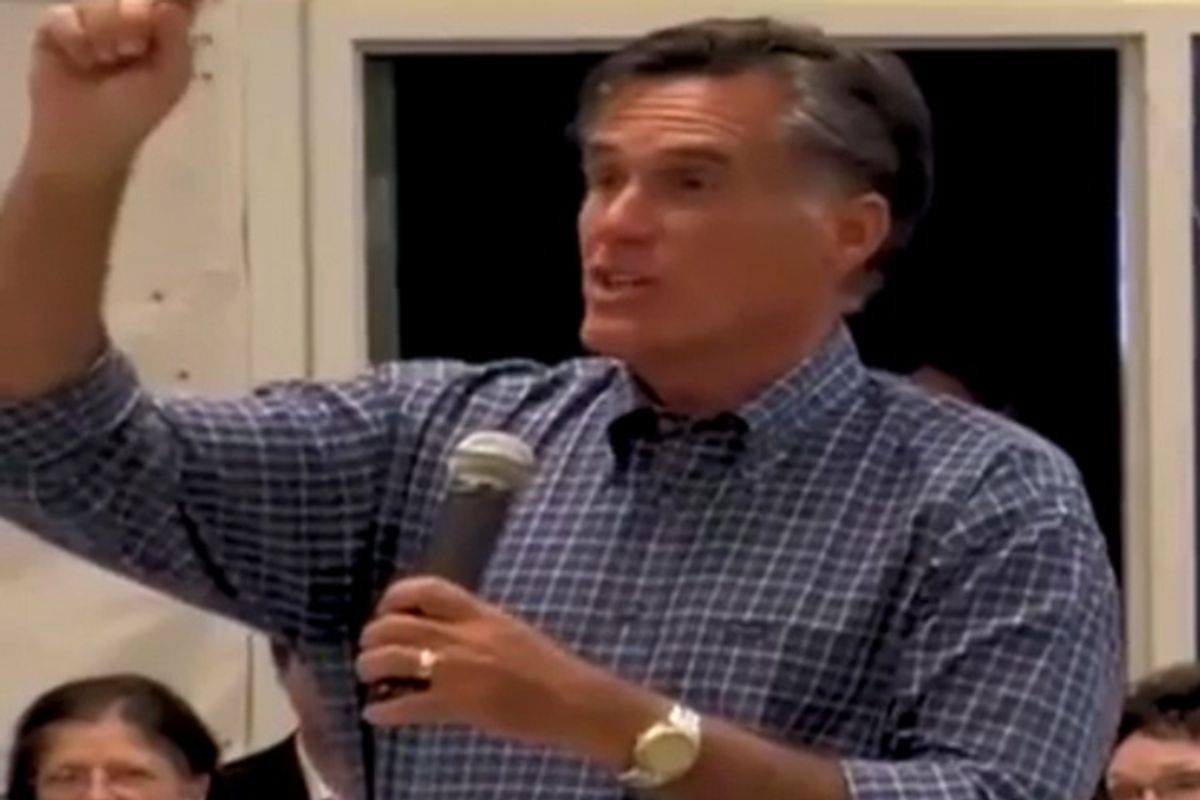 When Mitt Romney waged his first political campaign, for a U.S. Senate seat in Massachusetts in 1994, his wife told the press that in 30 years together they had "never had a serious argument."

"Mitt has never once raised his voice to me," Ann Romney said, adding that she'd "dissolve into tears" if he ever did.

Those comments are worth keeping in mind as you watch a clip from a Mitt Romney town hall event on Thursday that some are touting as his "Chris Christie moment." In the exchange, an unidentified woman offers a lengthy critique of Romney's anti-government rhetoric while Romney stands and listens, trying to keep a smile on his face. Soon he grows frustrated, cuts her off, and demands that she ask a question, and when she tries to butt in during his reply, he silences her with a forceful, "Let me finish, Madam!":

Obviously, this does call to mind a heated exchange Christie had with a female teacher at a town hall event a while back, one of the YouTube hits that helped establish the New Jersey governor as a national GOP star. And since the woman questioning Romney here seems to be criticizing him from a liberal perspective, this clip itself will probably help Romney's image with the right.

But what happens at the next GOP debate if, instead of this liberal woman, it's Michele Bachmann who decides to challenge Romney, on (say) his healthcare law? And what happens if she gets under his skin just like this woman did? This one was easy for Romney, but he still seemed uncomfortable and not quite sure how to handle the situation -- lots of forced smiling, stiff language, and a tone that could be construed as condescending. Twice he called her "madam."

If anything, it reminded me of a 2002 gubernatorial debate in Massachusetts when Romney grew frustrated with his opponent, Shannon O'Brien, and called her attacks on his abortion rhetoric "unbecoming." That particular moment is at the 4:30 mark in this video:

Romney's "unbecoming" line caused a stir in the race's closing stretch. O'Brien even held a press conference the next day with then-Sen. Hillary Clinton and said that "I certainly think that he wouldn't use the term 'unbecoming' if he were speaking about a male opponent." Of course, Romney had his defenders, too, and the controversy didn't cost him the election, which he won by 7 points.

But try picturing a similar exchange -- over abortion, healthcare or something else -- between Romney and Bachmann. She presses him, he gets irritated and makes a remark that sounds somewhat condescending, and she calls him on it. Given that the GOP's base likes and trusts Bachmann more than it likes and trusts Romney, it could cause a real headache for Romney.

In the two debates they've participated in so far, there's been very little interaction between Romney and Bachmann. But that figures to change. Chances are she'll end up going after him, and he'll have to engage. It'll be very interesting to hear what comes out of his mouth.