Despite the "miracle" enabled by Obama's stimulus, Barbara Bush flunks his public schools 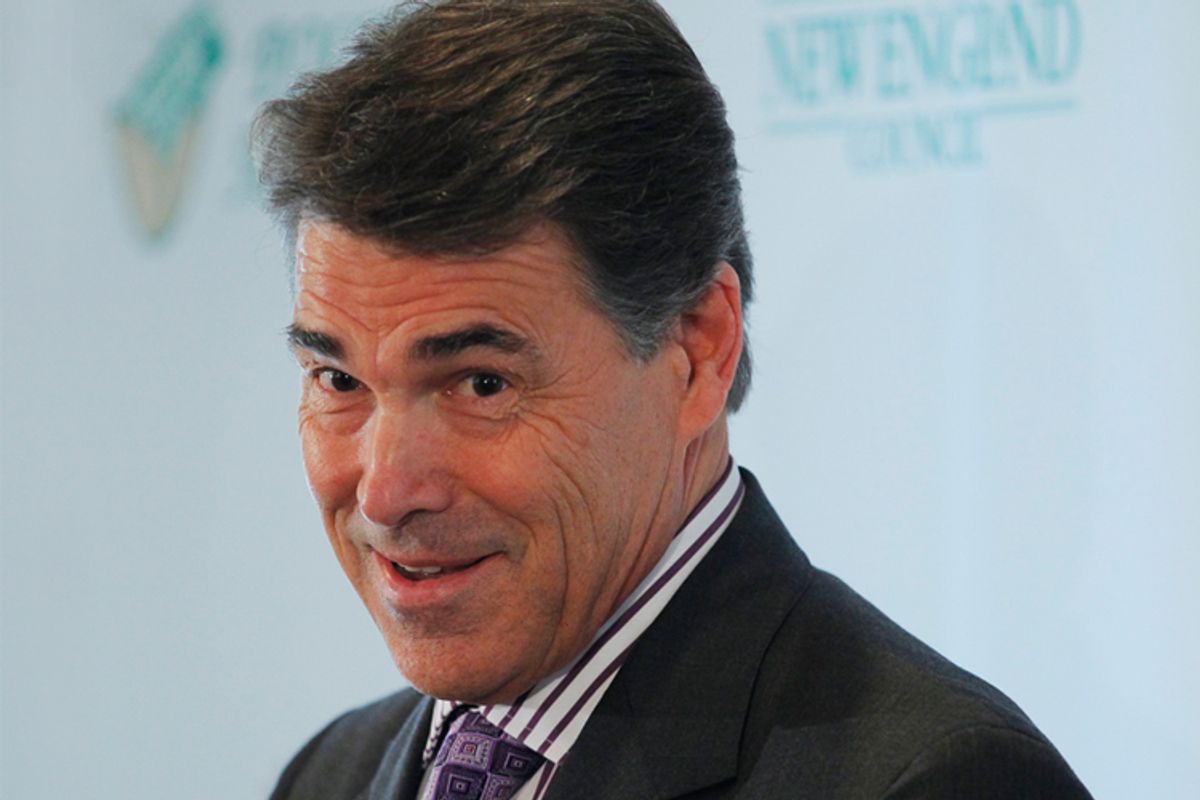 Although born and raised in a small town in the Finger Lakes region of New York, I'm the hybrid child of an upstate New York father and a mother from Texas -- they met at Fort Hood (then Camp Hood) during World War II. And you thought different species couldn't mate.

As a result, we were the only kids on the block who said, "Y'all," or had relatives named Bubba, Vade, Hoyt and Cleburne. My mother's father was known in our family as Granddaddy Lloyd. Care packages of unshelled pecans and Frito-Lay products (then largely unknown above the Mason-Dixon Line) would arrive at Christmastime. And among the books in our house was a buff-covered, dog-eared paperback titled "Tall Tales of Texas."

I flipped through it over and over. Inside were wild and woolly stories of the outlaw Sam Bass, frontiersman and Texas Ranger Bigfoot Wallace, Davy Crockett at the Alamo. Even taller were tales of Pecos Bill, with his lasso made from a live rattlesnake, the toughest cowboy in the world; and his wife Slue-Foot Sue, riding down the Rio Grande on the back of a giant catfish.

So, courtesy of some Lone Star DNA and basic reading comprehension skills, I think I know a Texas tall tale when I hear one, and presidential candidate and Texas Gov. Rick Perry's tales of "the Texas miracle" are as tall as they come.

Between December 2000 and December 2010, the state did have a net gain of 907,000 jobs, more than half the 1.6 million new jobs nationwide during that same period. But a lot of the state's success in job creation looks more like dumb luck than evidence of ole Pecos Perry's political prowess or expertise in governance. "It's not that the emperor has no clothes," Dan Hamermesh, an economics professor at the University of Texas, told the website AOL Jobs. "But he's got little more than a fig leaf over his crotch. It is a true fact, but he had nothing to do with it."

Perry points to deregulation and low taxes, including an incentive program called the Texas Enterprise Fund, said to have created 58,000 jobs, but there were many factors largely beyond his control, including increased trade between the United States and Mexico and the high price of gasoline that pumped revenue into the state, accompanied by new technologies for oil and gas extraction. In the Aug. 15 New York Times, Clifford Krauss reported, "The oil and gas industry now delivers roughly $325 billion a year to the state, directly and indirectly. It brings in $13 billion in state tax receipts, or roughly 40 percent of the total, financing up to 20 percent of the state budget."

What's more, a lot of the increase has been funded -- say it ain't so, Pecos! -- by federal largesse, including President Obama's economic stimulus. In the last 10 years, federal spending in the state has more than doubled to over $200 billion a year (thanks in large part to NASA and the many military installations in the state, including the aforementioned Fort Hood, one of the world's largest military bases and the biggest single employer in Texas).

Of all the U.S. government jobs added in this country between 2007 and 2010, 47 percent of them were in Texas. According to Jared Bernstein, former economic advisor to Joe Biden:

"Texas employment wasn't down much at all in these years, as the state lost only 53,000 jobs. But looming behind that number are large losses in the private sector (down 178,000) and large gains (up 125,000) in government jobs." Which shows, Bernstein goes on, that Texas has followed "a traditional Keynesian game plan: as the private sector contracts, turn to the public sector to temporarily make up part of the difference."

In 2009, Gov. Perry made a show of rejecting $556 million in federal funds for unemployment, saying there were too many strings attached. In fact, that money was equal to only 2 percent of the more than $20 billion in stimulus money Texas did accept, including cash used to cover 97 percent of the state budget's shortfall for 2010, according to the National Conference of State Legislatures.

This, in spite of GOP attacks on the public sector, Perry's claim that the stimulus was failed and misguided and the pledge in the announcement of his presidential candidacy that he would "work every day to make Washington, DC, as inconsequential in your lives as I can." As the Aug. 20 Washington Post noted, "The significant role of government in Texas' relative prosperity stands in stark contrast to the ‘go-it-alone' image cultivated by Perry, who credits a lack of government interference for fostering a business-friendly environment in Texas."

For those like Gov. Perry who brag about being no-nonsense, freedom-loving cowpokes, it's a delusion that goes all the way back to the early settlement of the American West. As Patricia Nelson Limerick writes in her seminal history "The Legacy of Conquest," "At any period in Western history, the rhetoric of Western independence was best taken with many grains of salt." Whether it was fighting Indians or gaining access to public grazing lands, the federal government has always been integral. "Nothing so undermines the Western claim to a tradition of independence," she writes, "as this matter of federal support to Western development ...

"And yet humans have a well-established capacity to meet facts of life with disbelief. In a region where human interdependence has been self-evident, Westerners have woven a net of denial." Sounds familiar.

Accompanying Gov. Perry's denial is cronyism and patronage, both good ole boy-style and corporate. (Of the $102 million in campaign contributions raised for his gubernatorial races, Katrina vanden Heuvel wrote, half came "from just 204 sources," and the Los Angeles Times reports, "Nearly half of those mega-donors received hefty business contracts, tax breaks or appointments under Perry.")

So, too, with greed comes hubris and shortsightedness. The Times' Krauss reported:

"Critics, among them Democrats ... have long complained that the state's economic health came at a steep price: a long-term hollowing out of its prospects because of deep cuts to education spending, low rates of investment in research and development, and a disparity in the job market that confines many blacks and Hispanics to minimum-wage jobs without health insurance."

"27 percent of Texas workers lack health insurance compared to 17 percent nationally. The ranks of the uninsured have grown steadily as access to employer-sponsored health insurance has declined… Fewer than half (48 percent) of the state's workers have access to a retirement plan at work, a figure that has plummeted since reaching a high of 61 percent in 2000."

Over the past 20 years, college costs in Texas have quadrupled, with the steepest jump occurring since tuition was deregulated by the state in 2003. Former first lady Barbara Bush observed in a February Op-Ed that the state ranks 49th in verbal SAT scores, 47th in literacy and 46th in average math SAT scores: "We rank 36th in the nation in high school graduation rates. An estimated 3.8 million Texans do not have a high school diploma ... the United Way estimates that the price tag for dropouts to Texas taxpayers in $9.6 billion every year." But the state's latest budget cut $4 billion from public schools.

A recent, four-part series on Perry's Texas from a team at the Houston Chronicle reports:

"After a decade of Perry-style frugality the Texas welcome mat is growing increasingly threadbare as the state struggles to accommodate a booming, young populace hoping to travel its roads, get educated in its schools, drink its water and access its health care system. During Perry's tenure the state has postponed investment or turned to debt to finance crucial infrastructure needs, experts say."

The average urban Texan loses a week a year to traffic delays on the state's "overburdened" highway system. While Perry boasts of luring thousands of doctors to the state, "lawmakers this year cut $805 million from doctors serving Medicaid patients" and "postponed $4 billion in Medicaid costs for payment in the next payment cycle." Texas is 48th out of 50 states in the number of physicians per 100,000 residents.

"As Texas endures its most severe one-year drought in its history, state leaders have identified $53 billion in state investments needed to expand water capacity by 2060 but have not resolved how to pay for it. Unless Texas increases its water resources, experts say 83 percent of Texans will not have an adequate supply of water in times of drought."

Perry issued a proclamation urging Texans to pray for rain.

With more bad news ahead, stagnant wages and an explosion in population and the labor force that now has unemployment advancing much faster than Perry's touted job growth, "the Texas miracle" is heading into a ditch.

Which brings to mind another tall tale, the old joke about the Texan who says to an Eastern visitor, "Yessir, I can drive across my ranch all day and all night and still not get to the other end." To which the visitor replies, "I know what you mean. I have a car like that, too."