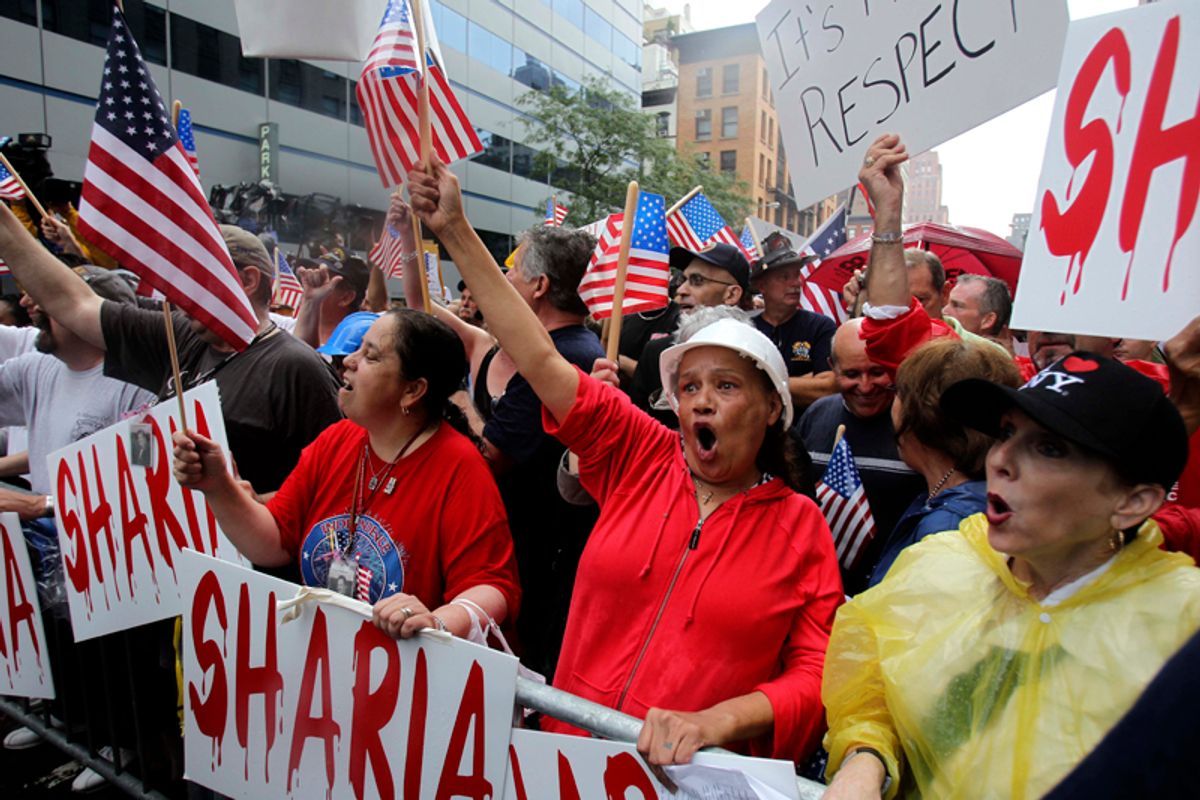 In a 140-page report released Friday, researchers at the Center for American Progress have traced the origins of rising Islamophobia in the United States to what they call a "small, tightly networked group of misinformation experts guiding an effort that reaches millions of Americans through effective advocates, media partners, and grassroots organizing."

The report features profiles of some figures -- blogger and activist Pamela Geller and think tank denizen Frank Gaffney -- who will be familiar to regular Salon readers. It names Gaffney and four others as the leading "misinformation experts" who generate anti-Muslim talking points that spread in the media: Daniel Pipes of the Middle East Forum; David Yerushalmi at the Society of Americans for National Existence (who is also the architect of the anti-Shariah movement); Robert Spencer of Jihad Watch; and Steven Emerson of the Investigative Project on Terrorism.

The report also reveals that a small group of little-known foundations have in the past decade provided more than $40 million to groups promoting Islamophobia.

I spoke to two of the report's authors, Eli Clifton and Wajahat Ali.

How do you define Islamophobia?

Wajahat Ali: We define it as an exaggerated fear, hatred and hostility toward Islam and Muslims that is perpetuated by negative stereotypes resulting in bias, discrimination and the marginalization and exclusion of Muslims from American social, political and civic life.

For example, the blogger Pamela Geller has written, "Devout Muslims should be prohibited from military service. Would Patton have recruited Nazis into his Army?" And here is another quote from Brigitte Gabriel, founder of one of the major grass-roots Islamophobic groups, Act for America: "[A] practicing Muslim who believes the word of the Koran to be the word of Allah, who abides by Islam, who goes to mosque and prays every Friday, who prays five times a day -- this practicing Muslim, who believes in the teachings of the Koran, cannot be a loyal citizen to the United States of America."

We're all for freedom of speech. We're all for people having the right so say what they believe in America. But, at the same time, these individuals have been promoted as legitimate, neutral experts on Islam and Muslims when they're anything but that.

You say in the report that you did not find a "vast right-wing conspiracy" to spread Islamophobia. So what did you find?

Eli Clifton: That's right. It's not a conspiracy; it's not an overwhelming sum of money. And this is not something that runs across the entire conservative spectrum. What we're seeing is a relatively modest amount of money and a relatively small number of people and major donors that make up this echo chamber. It's a good object lesson in how one influences public opinion and media messaging. As one section of the report explores, how do you get a sound bite turned into a truth accepted by the public?

How does that happen?

Ali: There are five major players who we call the central nervous system of the Islamophobia network. They're primarily responsible for creating the talking points and manufacturing the messages and memes that get distributed and mainstreamed via the network. The second aspect of it is the grass-roots organizations and the religious right. Examples include Act for America, Eagle Forum and Stop Islamization of America. They take these talking points -- such as, "Shariah is a legal-political-military doctrine that will supplant the United States Constitution" -- and promote them. Then these ideas -- such as "Obama may be a Muslim," "Shariah is a threat," "mosques are Trojan Horses" -- are mainstreamed through a media megaphone. That's primarily Fox News but also radio shows like Sean Hannity, Glenn Beck and Rush Limbaugh and websites like WorldNetDaily, FrontPageMag and JihadWatch. Finally, we see how these talking points are used by mainstream politicians, as we've seen in the Republican presidential primary this year.

Ali: We spent time in the report documenting the fact that these people are not legitimate scholars or experts on Islam or Shariah. These are individuals who have an extremist ideology that promotes a conspiratorial anti-Muslim agenda.

What new information are you reporting about of the funding of these groups?

Clifton: We found that seven primary donors gave about $42 million over 10 years to eight groups promoting Islamophobia. For example, the second biggest donor is Richard Scaife and his foundations in Pittsburgh. He contributed nearly $8 million to the network, including to the Center for Security Policy, which is Frank Gaffney' group, and to David Horowitz's Freedom Center. The seven donors are: Donors Capital Fund, Richard Mellon Scaife, the Lynde and Harry Bradley Foundation, the Newton D. & Rochelle F. Becker foundations and charitable trust, the Russell Berrie Foundation, the Anchorage Charitable Fund and William Rosenwald Family Fund, and the Fairbrook Foundation.

Clifton: They share a right-wing tilt, but beyond that there is a fair degree of range in terms of where their interests lie. You have to take them on a case-by-case basis to try to figure out where they're coming from. The Russell Berrie Foundation, for example, actually gives to a wide variety of groups, including some fairly progressive organizations such as the New Israel Fund. But then they also turn around and give $250,000 to Daniel Pipes' Middle East Forum. It's very hard to figure out in some cases how aware these foundations even are of what they're doing. It's something they should be asked, and something that I hope people reach out to them on. We've reached out to all of them and have not gotten any substantive responses.