The trippiest martial arts movie ever? 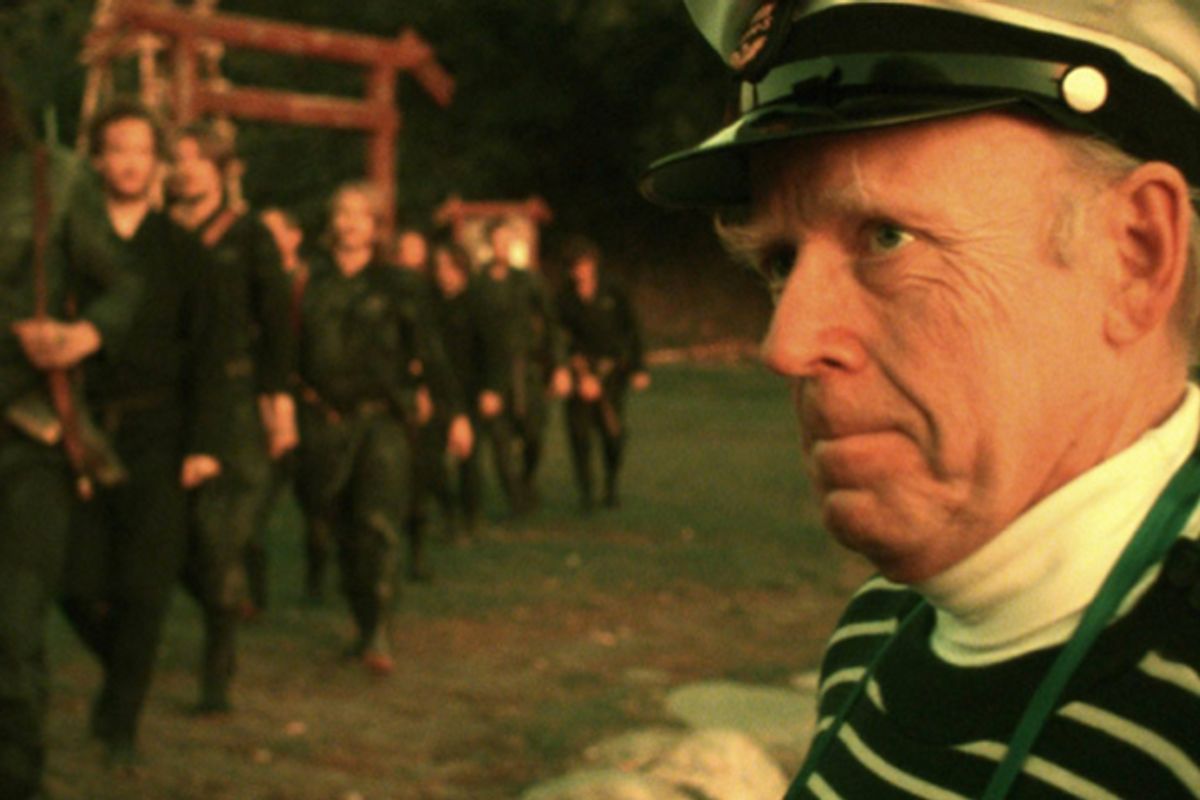 A still from "Norwegian Ninja"
--

When you review straight-to-DVD movies, you see a lot trailers built around Kimbo Slice fighting Rampage Jackson in a cage intercut with shaky cam footage of strippers working the pole. But every so often I run across one full of nothing but sheer, unadulterated WTF. If trailers like these are the precious metals of the video world, then the one for "Norwegian Ninja" is pure gold valued at nearly $1,900 an ounce.

In a little under two minutes, the "Norwegian Ninja" trailer combines the Scandinavian martial arts madness that the title suggests and footage of miniatures set ablaze with flames that look like they're coming out of a Zippo lighter. And there are crazy-looking amphibious assault vehicles and sheep -- lots and lots of sheep -- and a synth score that resembles the repetitive triumphalist theme to the Chuck Norris epic "Delta Force," only more somber and European. "Be one of us," a stern blond man wearing glasses and a black karate uniform urges, "Be a Ninja." I am so there.

With "Norwegian Ninja," first-time writer-director Thomas Cappelen Malling somehow, against all odds, delivers a film that's even stranger than its boffo trailer suggests. Malling bases his hallucinatory mishmash on the biggest case of espionage and treason in his country's history. Arne Treholt was a Norwegian diplomat who was busted for passing secrets to the Soviets in 1984, but here he is reimagined as the patriotic commander of a crack team of ninjas dedicated to guarding "the Norwegian way of life."

"No one will occupy us," the heroic Treholt vows through subtitles, "neither Russians nor Americans."

As it turns out, protecting Norway's "sovereignty and self-sufficiency" seems to involve lots of philosophical discussions held around campfire barbecues, all in an island compound that looks like a petting zoo and is protected by Feng Shui. "System disharmony halts the flow of energy, slowing down intruders with illness and bad luck," Treholt explains. When the ninjas do go out on missions to find marauding Russian subs or stop oil derricks from blowing up, they always seem to come up short. Mads Ousdal of Norway's National Theater holds the lunacy together by playing Treholt with utter seriousness -- even when he's appearing and disappearing in puffs of smoke like a low-rent magician or flicking cigarettes into his mouth with action hero aplomb.

Squaring off against Treholt is Hans Otto Meyer (Jon Øigarden), another shadowy figure lifted from the annals of Norwegian conspiracy theories. Here, as well as certain corners of Wikipedia, Meyer works for Stay Behind, a CIA-backed covert op that stages train station bombings in Italy and other acts of terror all around Europe, and then blames it all on Soviet partisans to get these countries to allow U.S. bases on their soil. "Would you kill one person to save a thousand?" the Stay Behind field manual reads during a sequence of visual exposition. "Then you'd kill 4,500 to save all of Norway," is the grim answer. Meyer even resembles G. Gordon Liddy and has a framed 8x10 of Ronald Reagan on his desk as he plots plane crashes and sabotage to "scare voters into the lap of the powers that be" and demands "war against an innocent scapegoat."

The influence of Wes Anderson's kooky visual and storytelling style is undeniable here (especially "The Life Aquatic with Steve Zissou"), but the seriousness of "Norwegian Ninja's" source material has it sharing common, albeit less bloodstained, ground with Tarantino's "Inglorious Basterds" (2009). While Tarantino clings to the "Dirty Dozen" paradigm of a band of gun-toting sociopaths shooting their way to freedom, Malling shows its absurdity by infusing the mundane and somber world of espionage with ridiculous amounts of hyper-macho super spy mythos. The real Treholt was just a bureaucrat attempting to pass some folders pulled from a ubiquitous gray file cabinet to other bureaucrats over a brunch of sausages. In the end, he was apprehended by airport police.

To illustrate his point, Malling intersperses scenes of ninja ass-kicking with old television news reports on the real Treholt and Meyer. And while this may be a silly movie, this disregard for nationalistic masculine fantasy goes at least a short way towards explaining Norway's sober response to the recent massacre. After the attacks, Norwegian Prime Minister Jens Stoltenberg called for "more democracy, more openness and greater political participation" -- a stark contrast to American politicians' response to 9/11.

"A real ninja wins without fighting," the fictional Treholt tells us in between explosions that look like sparklers. Now there's a piece of chop-socky zen to think about.