The timidity of Ben Bernanke, explained 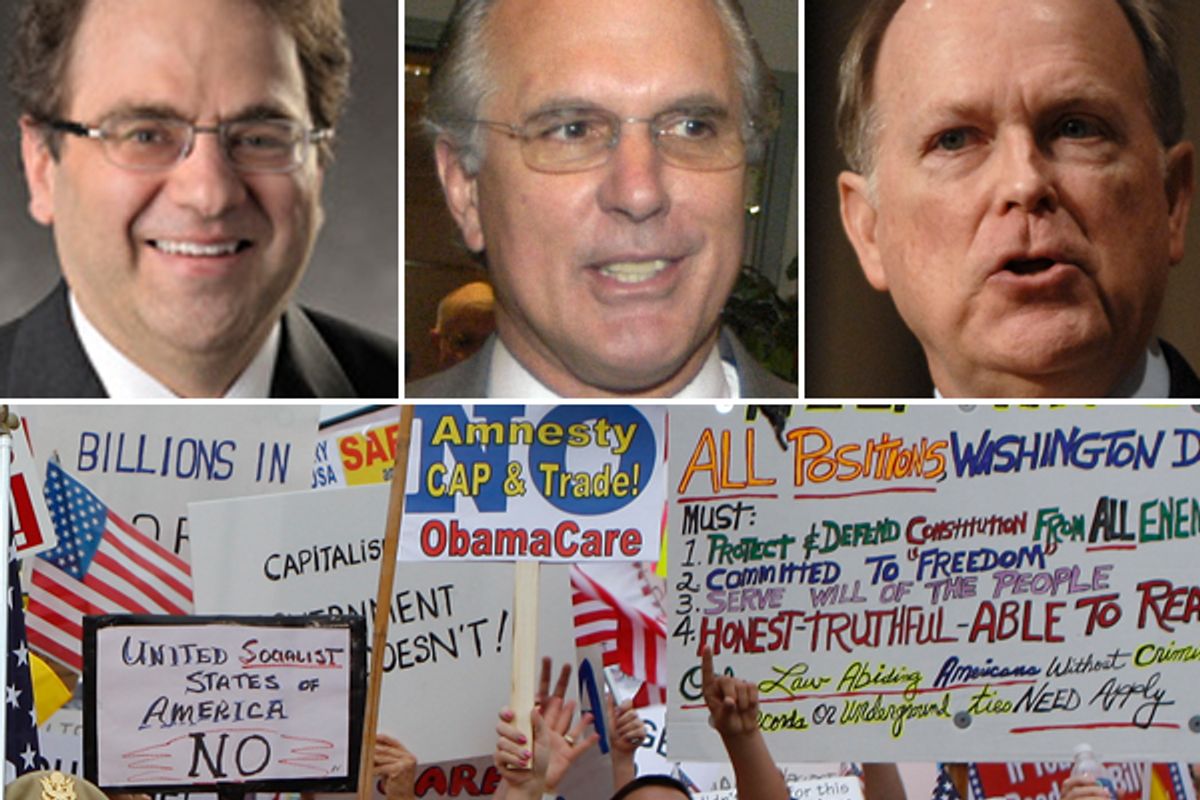 Why was Ben Bernanke so cautious in his much-anticipated-dud of a speech in Jackson Hole, Wyoming Friday morning? Could it be that, in part because of President Obama's missteps, the Fed chairman is having trouble wrangling a consensus from the Federal Reserve's Open Market Committee, the group of Federal Reserve district bank presidents and Board Governors who collectively determine U.S. monetary policy? For one solid clue, let's return to the most recent meeting of the meeting, on August 9.

Responding in part to the turmoil that disrupted financial markets after Standard & Poor's decision to downgrade U.S. credit, and in part to the increasing evidence that the economy was slowing faster than previously predicted, the Fed announced that it was committed to keeping interest rates at "exceptionally low levels... at least through mid-2013."

Three members of the committee dissented from the decision. In a somewhat cryptic postscript, the official press release noted that "Richard W. Fisher, Narayana Kocherlakota, and Charles I. Plosser... would have preferred to continue to describe economic conditions as likely to warrant exceptionally low levels for the federal funds rate for an extended period." (Emphasis mine.)

The difference between "an extended period" and "at least through mid-2013" might seem a picayune matter to most people. But it's been 19 years since as many as three members of the Open Market Committee have dissented at the same time. In Fed terms, that's at least a mild earthquake. Within the confines of this slender semiotic gap we can see new evidence of a major split between the Fed's "hawks" and "doves," as well as irrefutable proof of a crucial failure by the Obama administration to exert its influence on economic policy.

In Fed parlance, hawks are worried that low interest rates will lead to excessive inflation. Doves believe that inflation isn't currently a threat, and taking measures to stimulate the economy and spur job creation should be a higher priority. By advocating for the term "extended period" instead of for a longer  commitment, the dissenters were implicitly arguing that the Fed should be keeping inflation fears on the front burner, as well as sending a signal that any more ambitious, unconventional form of monetary easing should be strictly avoided.

Fisher, Kocherlakota and Plosser are all well-established as hawks -- and some are stout critics of any government intervention in the economy (in 2008 Kocherlakota signed a petition opposing Obama's stimulus). But that's not the only thing that they have in common -- all three are also presidents of regional Federal Reserve banks. And that's an important fact to keep in mind when conducting amateur Kremlinology on how the Committee makes decisions.

Normally, the Committee is made up of 12 members. Seven are "governors" appointed by the president of the United States to 14-year terms. Five are presidents of the Fed's 12 member banks, rotated into the Committee for one-year terms. But the bank presidents are carefully "insulated" from the political process. The directors of each bank choose their own bank president, and six out of nine of those directors are in turn chosen by the banks who make up the Federal Reserve system.

What does that mean? It means at least five of 12 FOMC members owe their allegiance primarily to the banking sector. The fact that three out of those five are currently the most hawkish members of the Committee is not an accident. Banks hate inflation.

But here's where this story really goes off the rails. Two of the seats allotted to the Board of Governors are currently empty. Even worse, there are no outstanding nominations for those seats. This constitutes criminal negligence on the part of the Obama White House.

It's not all Obama's fault. He has already appointed three governors -- Janet Yellen, Sarah Raskin, and Daniel Tarrullo (and he also reappointed Bernanke.) So his stamp is on four of the 10 curent members. And of course, one of his other nominees, the Nobel-prize winning economist Peter Diamond, ran into the same stone wall of opposition from Senate Republicans that has thwarted so many other Obama nominations and initiatives.

But if Bernanke's cautious leadership derives in part because, as economist Justin Wolfers writes, he has only the support of a "slim governing coalition," the fact that there are two vacancies on the Committee that should already be occupied by Obama nominees has got to be a major reason why. As Matthew Yglesias moaned earlier this month, "if it's not possible to work something out, then there ought to be a partisan fight."

This should be a campaign issue. Republican intransigence is preventing the President of the United States from appointing Federal Reserve members empowered to fulfill one crucial part of the Fed's dual mandate -- full employment. If Bernanke isn't willing to be aggressive, one reason why is that he just doesn't have the troops.