The ridiculous things I did to avoid a play date

As a stay-at-home dad, I avoided that dumb parenting ritual of scheduled fun. Then I met a mom who forced my hand 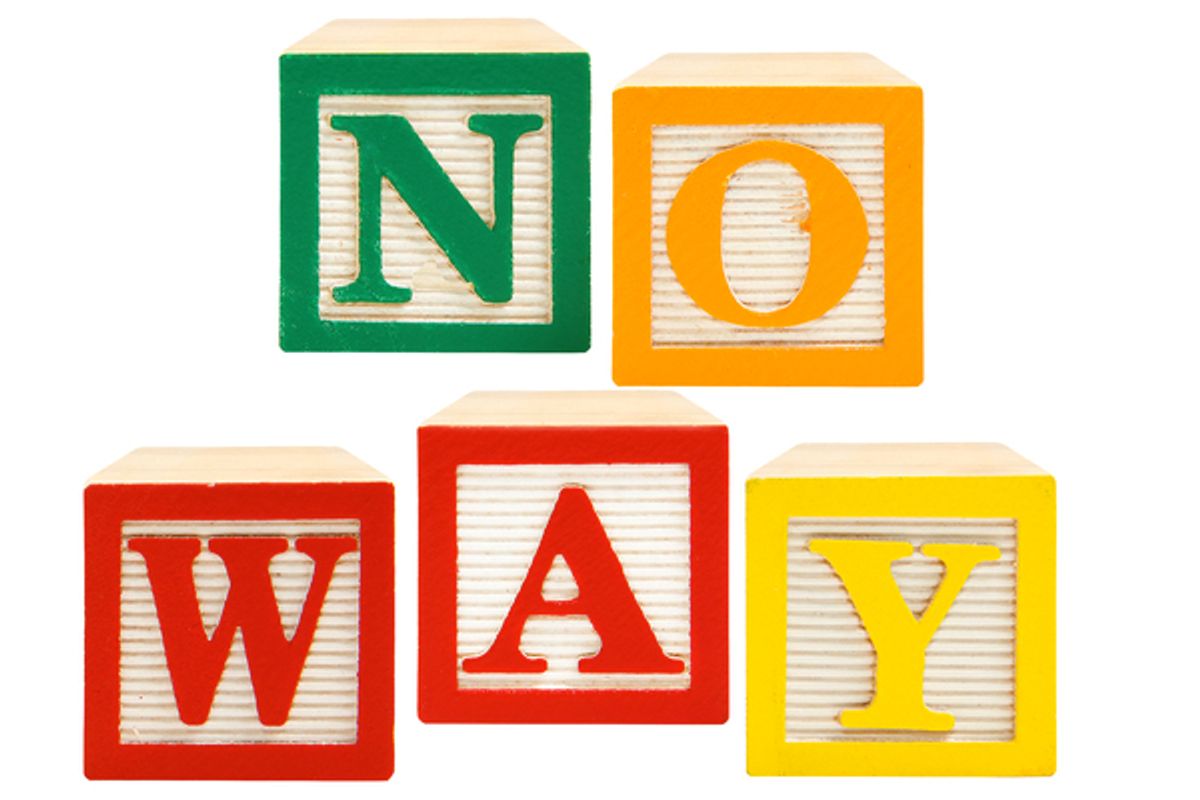 I grew up in a household dominated by strong masculine figures. My father took great pride in the fact that he couldn't cook, clean or shop. Both of my grandfathers ruled their households with an iron fist that would make any Latin American dictator envious.

We've come a long way since then. My wife and I have a real partnership. We work together on everything, and try to do the best for our kids every single day. After years of failing to find work, I grudgingly accepted the new economic reality and became a stay-at-home dad. I like to think I'm a good father, a modern man, but even I have my limits. There is one thing I absolutely will not do. I will not do a play date.

The thing is, I don't like interacting with other parents. It's enough that I shop and try to cook a nutritious meal every single night. Now I have to yammer on about my girl's love of kitties or stuffies or the Wonder Pets? That's valuable time taken away from my rapidly shrinking male pursuits.

Even the concept of the "play date" rubs me the wrong way. When I was a young boy, you went over to your friend's house and hung out, until you heard your mom yelling down the street to get your you-know-what home. The moms and dads were never involved in this activity. Why would they be? I wouldn't have wanted Mrs. Krula on my dirt-bomb team for all the Fantastic Four comics in the world.

Unfortunately, that's gone the way of the three cocktail lunches. Now what we have in its place is an appointment made between parents. It's a testament to how busy we are that we need to set a date just to play.

As it turns out, I have a beautiful 4-year-old girl who is embarrassingly popular at her preschool. During the mad rush that is drop off and pick-up at her daycare, the other parents make it a point to tell me just how much their kid loves playing with mine. Which is great. I'm happy for her. But the problem is that it doesn't stop there.

Lucky for me I've developed a series of maneuvers that work on any parent when the dreaded "P word" is thrust upon me. It can be a faked illness, like my daughter having a bout of nasty diarrhea the night before. Or, if I'm in the mood, I'll use the distraction technique, which involves me telling said parent that my mother or father is in the car waiting to see their granddaughter and that I really should be going. Sometimes I'll just say, "You know our schedules are kind of wonky." I've always gotten out of it. That is, until recently, when I met that parent. The uber-mom who finally broke me.

I was collecting my daughter and the junk from her overcrowded cubby one afternoon, and I was using my standard "I'm a selfish, bumbling, incompetent dad who can barely manage raising kids" routine, which usually keeps parents at a distance. I dropped her clothes, her artwork, spilled a little of her snack to sell the schtick.

But this particular mom took it all in stride. Leaning over to pick up my girl's clothes, she said, "It sure is hard to keep everything together, isn't it?"

This mom had some game in her and wanted to play in the big leagues. Fair enough. But she didn't realize I was a pro.

The next day came, and here she was at my daughter's cubby again. Only on this day she decided to ramp up her play. She kept her son Max beside her:

But then I played my seasoned hand.

See, whenever I pick up my child, I always hold her close to me -- tight. Sure, it's to show some love and say hi after being apart, but the truth is my kid will bolt if I let her go. So that's what I did. In the middle of the chorus of pleases, I subtly let my hand go limp and gave my wee one the slightest of pushes. And bam! She was off like the track star I hope she'll one day be.

It's my "break in case of emergency" action. Every parent, by sacred unwritten decree, cannot dispute you dropping everything when your child runs away from you. Conversations are stopped in mid-please, and it is now your parental duty to run like a fool to collect your fleeing spawn.

It was so sublimely natural that no one would ever suspect it wasn't genuine. "I'm sorry, she's just so silly sometimes, sorry," I stammered. "Oh, and we'll talk! Come back here, Sally!"

By the time I caught up to my girl at the bottom of the stairs, she had this anxious look on her face. She thought she had done something wrong, so I completely baffled her when I swooped her up and told her how much I loved her. A second later she was in the car with me drinking her juice box and eating her cheese string like it was just another day. She gave no thought to the fact that only a day ago her daddy told her never to run away and now he was strangely happy that she had.

I drove home confident the matter had been settled.

But I was wrong. The mom was all laughs and smiles the next time we met over cubbies, and I had no choice but to promise to look at my calendar and let her know soon.

The next few days were ridiculous, even by my standards. Instead of dropping my daughter off at 8:30, as usual, I acted like some drive-by dad who drops his kid off as soon as daycare opens. And at night, I replaced my leisure drop-in times at 5 or 5:30 and now waited until the last possible moment to collect my daughter, in the hopes that no one else would be around.

My play date phobia was getting the better of me. Even worse, it was messing with my little girl, who through no fault of her own was losing out on every social invite because of her dad's silliness.

The next afternoon I happened to arrive at the daycare early, and before I could rush in to pickup my girl I saw her laughing and playing with the little boy whose mom had been so relentless. It was time for me to toss in the proverbial towel – again.

"Uh, how's this Sunday for a play date?" I offered the mom when I saw her the next day.

Of course the mom accepted. Of course my daughter had a great time. And of course this woman made me pay for my previous games. And so it was that when I arrived to pick my girl up, Mrs. Play Date walked onto the porch and said, in full view of my daughter and her son, "Well these two little darlings played like two peas in a pod and had a lovely time, but I think your girl wants to ask you something."

"What's that sweetie?" I asked.

"Daddy, can Max come over to our house for a play date tomorrow -- please Daddy?"