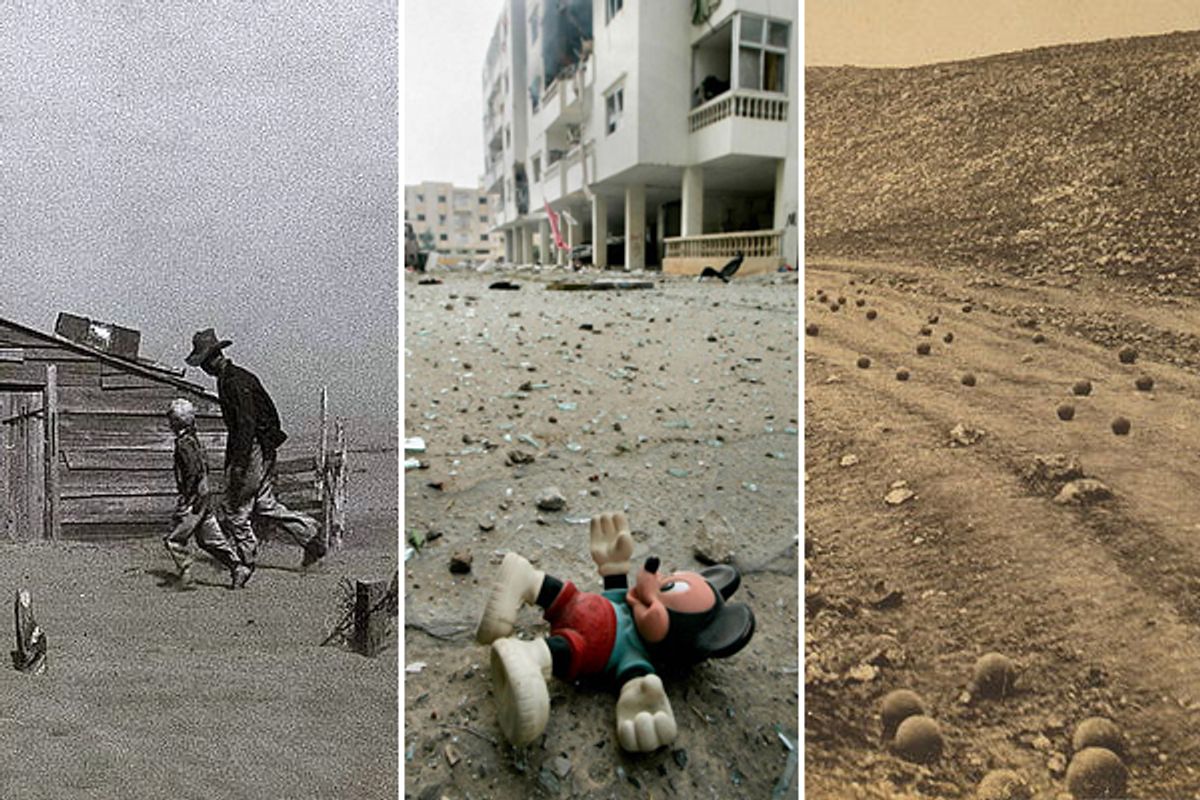 They knew they were right: That phrase (with apologies to Anthony Trollope) could serve as a tag line for the collected works of director Errol Morris, the maker of such classic nonfiction films as "The Thin Blue Line" and "The Fog of War." People often find support for their claims of perfect certainty in photographic evidence, and who better to point out the rickety nature of such "proof" than a master of images and their slippery charms?

Morris has worked both as a private investigator -- the archetype of the truth-seeker in American pop culture -- and a director of television commercials -- pretty much the opposite. His first steady work as a writer, however, came from the New York Times Op-Ed desk, which hired him as a contributor to its Opinionator blog a few years ago. The essays collected in Morris' new book, "Believing Is Seeing (Observations on the Mysteries of Photography)," have been adapted from those posts and handsomely mounted in an image-rich hardcover. Morris considers five instances in which photographs were seized upon as testimonials to the truth; in all but one case, that testimony was later challenged.

The photographs are famous: Roger Fenton's 1855 images of the Crimean War, particularly the desolate moonscape titled "Valley of the Shadow of Death"; the snapshots taken by soldiers in Abu Ghraib during the Iraq War; pictures of a sharecropper's cabin taken by Walker Evans in collaboration with James Agee during the 1930s and published in the book "Let Us Now Praise Famous Men"; an AP photo of a child's toy lying in the rubble after the 2006 Israeli bombing of Tyre in southern Lebanon; and an ambrotype of three children found on the otherwise unidentifiable body of a Union soldier killed in the Battle of Gettysburg.

In each case, Morris presents his readers with a photograph that seems eminently intelligible. We know what we're seeing and we think we know what it means. Then Morris ushers us behind the scenes and into a world of tangled doubt. Why are there cannonballs strewn on the road in one version of Fenton's photograph and none in another taken during the same 90-minute period? Which image came first, and who was responsible for either removing the cannonballs from the road or scattering them over it? And why did whoever did it, do whatever it was they did? Whew. Accompanying Morris on his quest is simultaneously bewildering and thrilling, like finding a fathomless secret world hidden behind the seeming simplicity of everyday life.

Provoked by Susan Sontag's serene conviction that Fenton "staged" the best-known "Valley of the Shadow of Death" photograph by moving the cannonballs onto the road, Morris decided to investigate. This entailed flying to the Crimea and searching out the exact position of Fenton's tripod in order to ascertain which direction the camera was facing when the photos were taken, then bringing in several experienced image analysts to scrutinize and compare the shadows in each photograph to determine which one was shot later in the day. That turned out to be even more involved than it sounds. Having followed this rabbit hole to its furthest reaches, perhaps it's only natural that the investigators found themselves nicknaming rocks -- Esmerald, Lionel, Marmaduke -- and even exclaiming, as one expert did when presented with Morris' contemporary shot of the site, "Oh my god. There it is! That's Marmaduke."

I won't spoil the results of Morris' inquiry, but for him it provokes ruminations on the nature of documentary and journalism. Ben Curtis, the AP photographer whose image of a Mickey Mouse doll amid the rubble of a destroyed residential tower in Tyre is the subject of another chapter, describes being unwilling to slightly reposition the toy even though that would have made for a better composition. Nevertheless, he was pilloried by bloggers who accused him, as Morris writes, "of deliberately placing the toy in the war zone." Ironically, both sides charged Curtis with producing propaganda for their opponents.

Seventy-five years ago, Arthur Rothstein, working as a documentarian in the Dust Bowl for the Farm Security Administration, didn't know any better than to take several shots of a steer's skull in a parched South Dakota field, repositioning it each time (within a 10-foot radius) until he got one he liked. This prompted Dakota boosters and New Deal critics to denounce the results (released to newspapers by the federal government) as "phony." Morris points out that "the photographs led the viewer to infer that the Dakotas were experiencing a severe drought. But the Dakotas were experiencing a severe drought," a fact nobody contested.

Conundrums like these are highly pertinent to Morris' own work. The juxtaposition of dramatized segments with traditional documentary footage in "The Thin Blue Line" contributed to making that film ineligible for an best documentary feature Oscar in 1988. It's not that Morris doesn't believe in truth, he'd just like to remind us that, when it comes to photographs, we see what we expect to see rather than what's actually there (hence the book's title). The idea that a photograph presents us with objective information about the world is delusional, partly because a photograph reflect the beliefs of the photographer, but mostly because until we surrender that delusion, we can't stop the image from reflecting our own beliefs. "Truth in photography is an elusive notion," Morris tells Curtis at last. "There may not be any such thing."

Books Documentaries Our Picks What To Read