The grisly discovery of 50 charred bodies has fueled fears 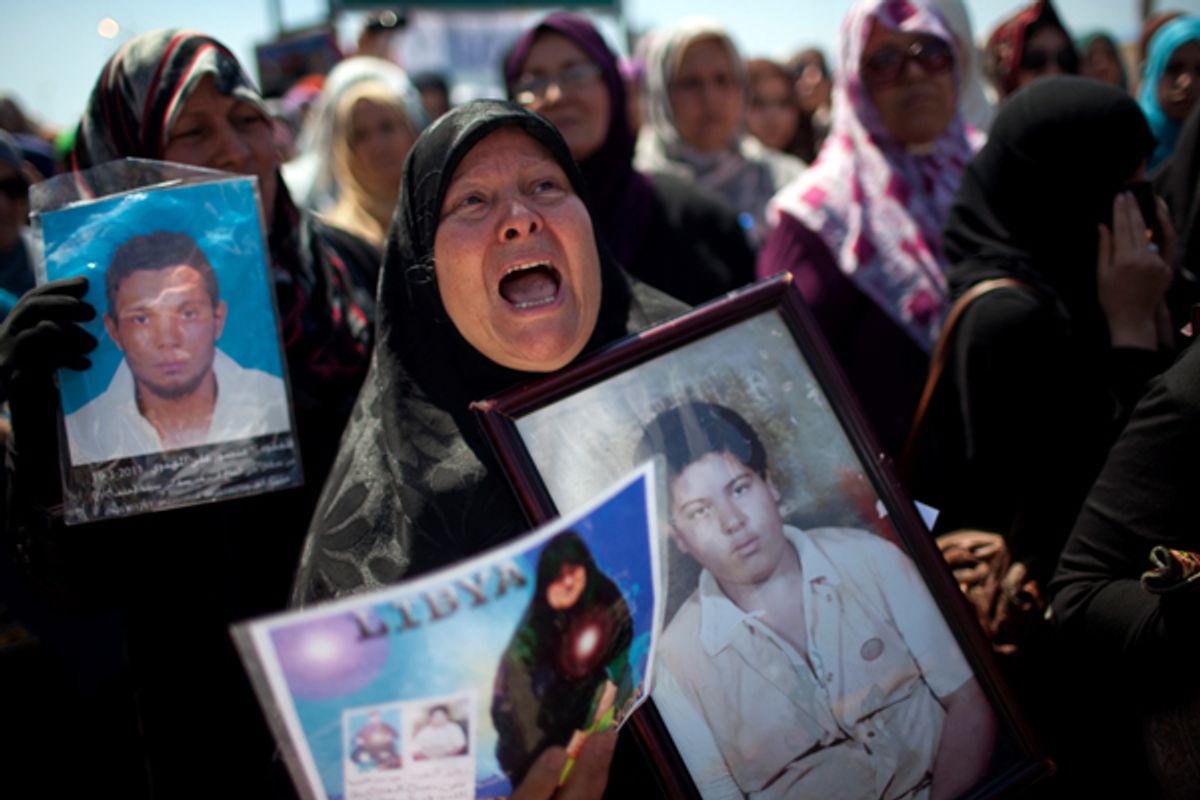 Galia Mohamed holds a portrait of her son, who was murdered in Bosalen prison by Moammar Gadhafi security forces in 1996.
--

TRIPOLI, Libya — Amid fears for the safety of an estimated 50,000 missing prisoners of the Gaddafi regime, Amnesty International has expressed grave concern over the lax measures to protect prison records in detention centers throughout the capital.

As prisons, government offices and personal residences of the former regime have been liberated by rebel forces, local residents have begun visiting in large numbers. Amnesty International said no measures have so far been taken to prevent the public from sifting through and removing vital prison records and files.

“Our biggest concern is that this crucial evidence of crimes committed in these places is disappearing,” said Amnesty International researcher Samira Bouslama. “For the courts and for the sake of those who have lost loved ones these files must be preserved.”

On Sunday afternoon, dozens of people could be seen rummaging through prisoner records at the notorious Abu Salim prison, where around 2,500 prisoners were liberated Wednesday. Some left with documents and files in hand.

Many had come to visit these formerly forbidden areas out of curiosity. Others had come in search of a trace of missing loved ones.

Bouslama said many had been unable to find records of family members that had been held here and feared these documents had been removed already.

Jamal Bennor, justice coordinator for the National Transitional Council, said he had not been informed about this matter and time would be needed to make an investigation. He added that numerous statements and eyewitness accounts had been collected from prisoners released by the rebel forces.

So far, almost 10,000 prisoners have been freed by rebel forces in the capital, but tens of thousands remain missing.

During a press conference in Benghazi, military spokesperson Ahmed Omar Bani said, “The number of people arrested over the past months is estimated at between 57,000 and 60,000. Between 10,000 and 11,000 prisoners have been freed up until now, so where are the others?"

The grisly discovery of around 50 charred bodies in a secret detention facility run by the notorious Brigade 32, an elite unit run by Col Muammar Gaddafi’s son Khamis, has fuelled fears that thousands more may have been slaughtered.

Aamir Benowen, 26, was among an estimated 160 prisoners detained in the compound. He had been captured three months before from his home in Tripoli but says to this day he does not know why he was arrested. Benowen said all prisoners were subjected to brutal treatment, but as the rebel forces advanced, the situation worsened.

Lying in the ICU unit of Tripoli’s Central Hospital, Benowen winced in pain as he spoke through a respirator. Numerous stab wounds, broken bones and severe bruising covered his body. His neck had been sliced open.

Benowen said the callous attack had occurred four days before the massacre of Aug. 23 when he saw an estimated 130 prisoners shot and blown apart by hand grenades. Many of the bodies were then set on fire.

Benowen is one of only 23 known survivors. Benowen says he survived only because guards had assumed he was dead already. Following the attack he had been left lying in his own blood without assistance for four days.

Looking after Benowen was Asma Omar Elgharian, 25, a volunteer nurse who had been married just 20 days when her new husband was shot dead by Gaddafi's men while protesting peacefully on Feb. 20.

“I have seen many cases here of similar brutality by Gaddafi soldiers, but this one is the most vicious,” she said.

Bouslama of Amnesty International said they were still investigating the case but had only managed to locate 23 survivors. The inmates came from all over Libya and included at least three minors and several men over the age of 60. Their time in detention ranged from three months to a few days. Many, like Benowen, said they had been taken from their homes and had not been involved in the fighting.

A further five prisoners had also been killed in a nearby prison run by the same brigade, she said. Three were military personnel and two had been doctors.

Bouslama said the NTC figure of 50,000 missing prisoners was unsubstantiated as thorough records had not been kept in all areas, particularly those cities that were until recently controlled by Gaddafi loyalists. Dealing with an the overwhelming number of patients, morgues and hospitals had also failed to keep accurate records making the true number of those missing impossible to determine at this time.

However, Bouslama said she believed the figure to be in the tens of thousands and Amnesty had grave concerns that more mass graves and hidden prison chambers were yet to be discovered.