Faced with a natural disaster, Chris Christie brags of a strong response. But does the rest of his party get it? 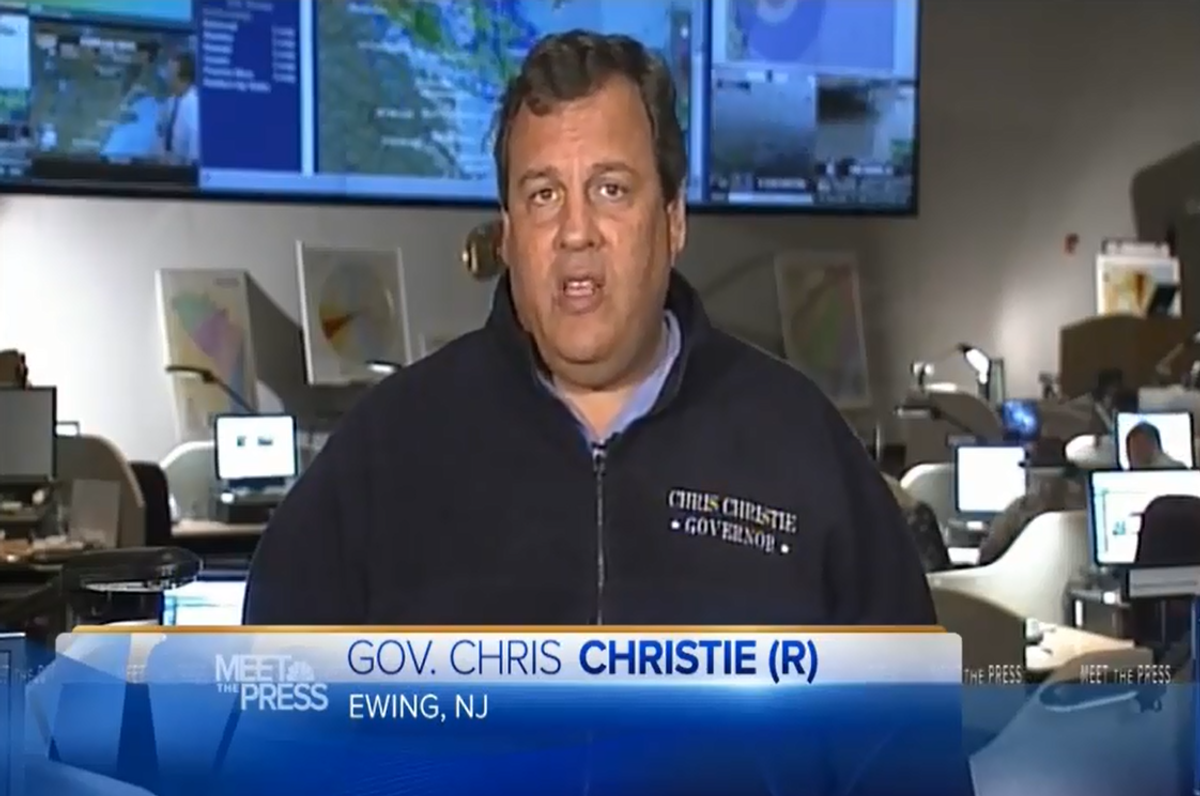 New Jersey Gov. Chris Christie is a conservative Republican who likes to decry high taxes and Big Government. But he’s also a smart politician, so as Hurricane Irene made its way through his state this weekend, he threw on an official-looking gubernatorial fleece, camped out at his state’s emergency command center, and essentially provided a one-man argument for the importance of government.

In a series of television appearances, Christie estimated that there might be "tens of billions" of dollars in damage, but assured viewers that a competent team of state and federal officials would be leading the cleanup effort. He said he was "proud" of the state/federal coordination, noted that "we have FEMA people right here on site ... working incredibly hard at providing things to us that we need," and explained why President Obama’s willingness to declare an emergency in the state had been so vital. He also offered this deal to New Jersey residents: "You need to stay in your home, and if you do, we can keep you safe and then we can ride through this."

In a way, there really wasn’t anything remarkable about the sight of Christie, a favorite of the Tea Party crowd, pleading with citizens to put their faith and trust in government.

Natural disasters invariably serve as political tests for state and municipal leaders, who are punished by the press and the public if they are seen as insufficiently concerned about the danger or not effectively engaged in providing relief. You could, for instance, make a case that Michael Bloomberg’s mayoralty in New York City hasn’t quite been the same since his widely panned response to a blizzard last December.

Christie was also caught off-guard by that blizzard, which struck while he and his family were vacationing in Florida, and the heat he took for that might be part of the reason he was so visible this weekend. And there is a long tradition of governors and mayors from both parties enhancing their images by saying and doing the exact same things he said and did this weekend.

The politics of Christie’s performance, though, become more interesting when you consider how another prominent national Republican greeted Irene. "We should be like 1900," Ron Paul said on Friday, arguing that the federal government -- and FEMA in particular -- should not be involved in disaster relief efforts. On "Fox News Sunday," he expanded his thoughts, blasting FEMA as "a system of bureaucratic central economic planning."

"So this idea that a bleeding heart will say, 'Oh, we have to take care of [the victims of Irene].' I mean, the whole idea of FEMA is a gross distortion of insurance," Paul said. In his ideal world, he added, federal disaster relief would be slowly phased out, since FEMA hinders the efforts of volunteers and the rights of local citizens by "telling you what you can and can’t do."

Now, it’s easy to place too much significance in Paul’s various obsessions. As I’ve written, his views on foreign policy and some civil liberties issues are so far from his party’s mainstream that it’s basically inconceivable that he’ll even come close to winning the GOP’s presidential nomination next year. But on economic issues, the post-meltdown base of the Republican Party has swung dramatically in his direction these past few years.

In other words, the true believers who make up today’s GOP base probably are more sympathetic to Paul’s claim that "we just don’t have the money" for federal disaster relief than they are to Christie’s statement that "your No. 1 goal as governor in a situation like this is the saving of human life -- and everything else is secondary."

This underscores a serious political problem for the Obama-era Republican Party. It used to be that GOP elected officials had some wiggle room when it came to balancing the demands of their base with the imperatives of keeping the broader public happy. This was important because the general public has some very mixed feelings when it comes to the role of government. While conservative rhetoric about government being bloated, wasteful, inefficient and unnecessary is quite popular, so are most big ticket government programs and services. Republicans have learned this in the past when they’ve bent too far toward pleasing their base -- think of Newt Gingrich’s attack on Medicare in 1995 or George W. Bush's planned Social Security overhaul in 2005.

But the wiggle room is basically gone, and today’s GOP base demands absolute ideological purity from its leaders. It’s no longer enough for them to campaign on generic anti-government rhetoric. The expectation now is that they will deliver a full-scale assault on the size and cost of government once they’re elected -- and if not, they can expect serious trouble in their next primary. It was this dynamic that led Republican House leaders to take a truly extraordinary step earlier this year by lining up behind a plan to turn Medicare into a voucher program even though they knew it would be politically poisonous with general election swing voters. But they felt they had no choice: It was the only way to keep the base happy.

The problem for the GOP isn’t really Paul himself. It’s the Paul-ist absolutism that has infected the party base, helping to elevate fringe ideologues to newfound prominence and forcing previously pragmatic leaders to embrace absolute and unyielding postures that soothe the base but agitate swing voters. This helps explain why the Republican Party’s image has plunged to its lowest level in modern polling.

Which is why Christie and Paul were so interesting to watch this weekend. In ditching the government-bashing for a few days, Christie skillfully played to his state’s swing voters and provided a potentially helpful model for his national party. But because of where today’s GOP base is, it may not be a model the national party is in any position to follow.