Republicans may have discovered the importance of disaster response, but they still don't care about preparedness 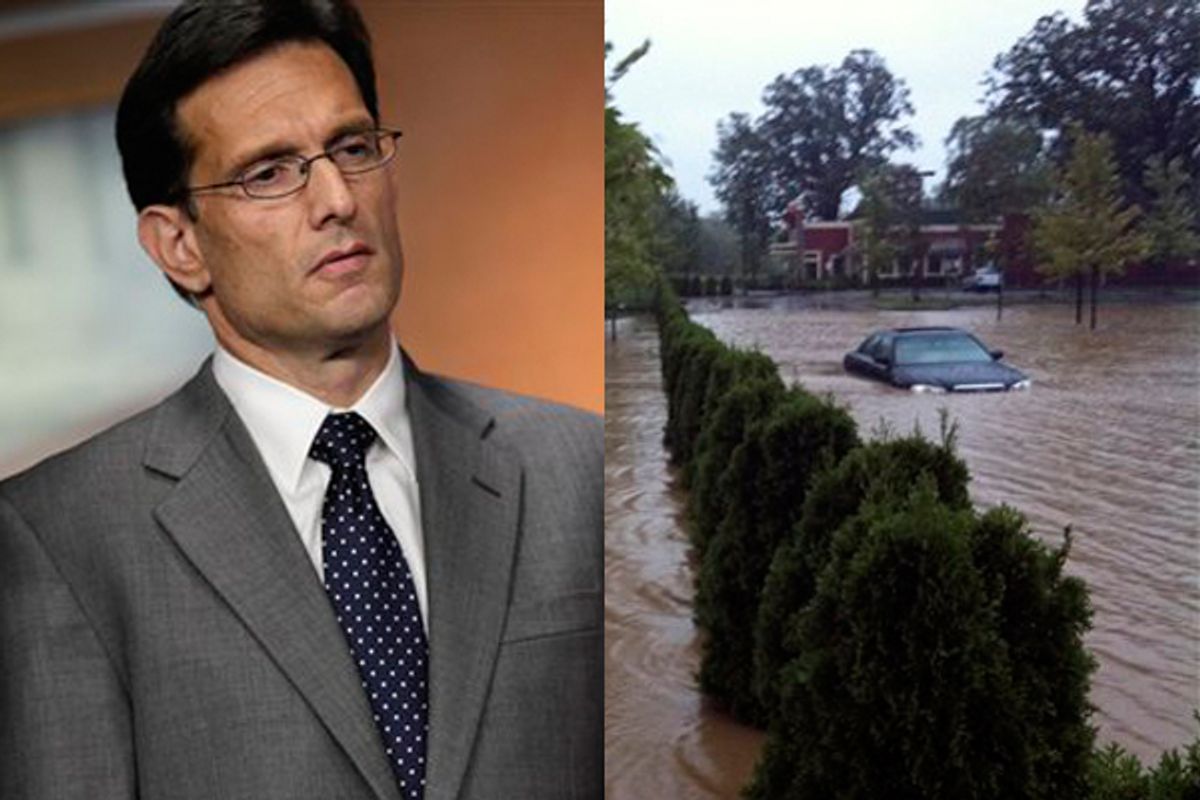 Hurricane Irene was less severe than predicted, but its wide swath of destruction will end up being extremely expensive. FEMA is already low on available disaster assistance funds. The agency will restrict payments going to long-term rebuilding projects at previous disaster sites (sorry, Joplin) in order to respond to emergencies across the entire eastern seaboard. And, of course, Republicans are playing politics with FEMA funding. That is to say, they're demanding more FEMA funding, and blaming the White House for budget shortfalls.

"Time and time again, the [Obama] administration has ignored the obvious funding needs of the Disaster Relief Fund, purposefully and irresponsibly underfunding the account and putting families and communities who have suffered from terrible disasters on the back burner," Rogers said. "Now the administration has let the fund reach critically low levels, putting continued recovery at risk, without a plan for the future or a clear method for dealing with new disasters."

Yep. Congressional Republicans have been begging -- begging! -- for the White House to spend more money on domestic federal agencies, but the White House, for some reason, insists on cutting spending. Those damn liberal small government fanatics.

Eric Cantor is joining the fight to give FEMA more of your taxpayer money, though he is at least demanding that spending be "offset" by cutting spending on other vague unnamed things the government does. (Oh, looks like they are cutting grants for clean energy vehicles.) The House GOP's bill also helps fund disaster response by ... cutting state grants for disaster preparedness. Because the GOP will always select the option that looks cheaper in the short term but that is significantly more expensive in the long run. That option is usually a political winner!

Such are the incentives of the American political system. The Pentagon spending $50 million on a "lightning weapon" that doesn't work is business as usual but making sure our bridges are sturdy enough to withstand strong tropical storms is a low priority.

The bill to clean up New York City -- which wasn't hit nearly as hard as Southern states, and which didn't experience a fraction of the flooding Vermont did -- will be big, but that's in large part because of the sorry state of New York's ancient infrastructure. The commuter rails are crippled. The airports -- especially JFK, which practically shuts down any time the wind picks up -- are shut down. Thousands of outer-borough residents and many of the nearby suburbs are completely without power. These are some of the oldest cities in the country, and their power and water and transportation systems show it.

New York City's mayor and city council have extremely limited control over the city's mass transit system. Finding the cash to turn the NYPD into a paramilitary international intelligence agency is no problem. Replacing the Tappan Zee Bridge will take another decade. And replacing a bridge is at least a big, sexy project that state legislators love. It's even harder to get people excited about addressing sand erosion in Rockaway Beach.

The Economist had a great piece on America's low infrastructure spending and the political incentives that got us here. States are rewarded for building new highways instead of fixing existing roads, our gas tax is low, small states have disproportionate influence on spending, and the governor of New Jersey (who recently learned to love big government) can unilaterally cancel a transportation project in New York.

So the GOP can crow about funding FEMA, to clean up after we're hit by tornadoes and hurricanes. But in a week, everyone in Washington (the White House included, most likely) will be back on the austerity bandwagon. Until the next disaster hits, and everyone wonders, again, how we could've let things get so bad.