There is just enough Ron Paul coverage, thank you

It can look like the "MSM" ignore the perpetual libertarian candidate, but the Internet more than makes up for it 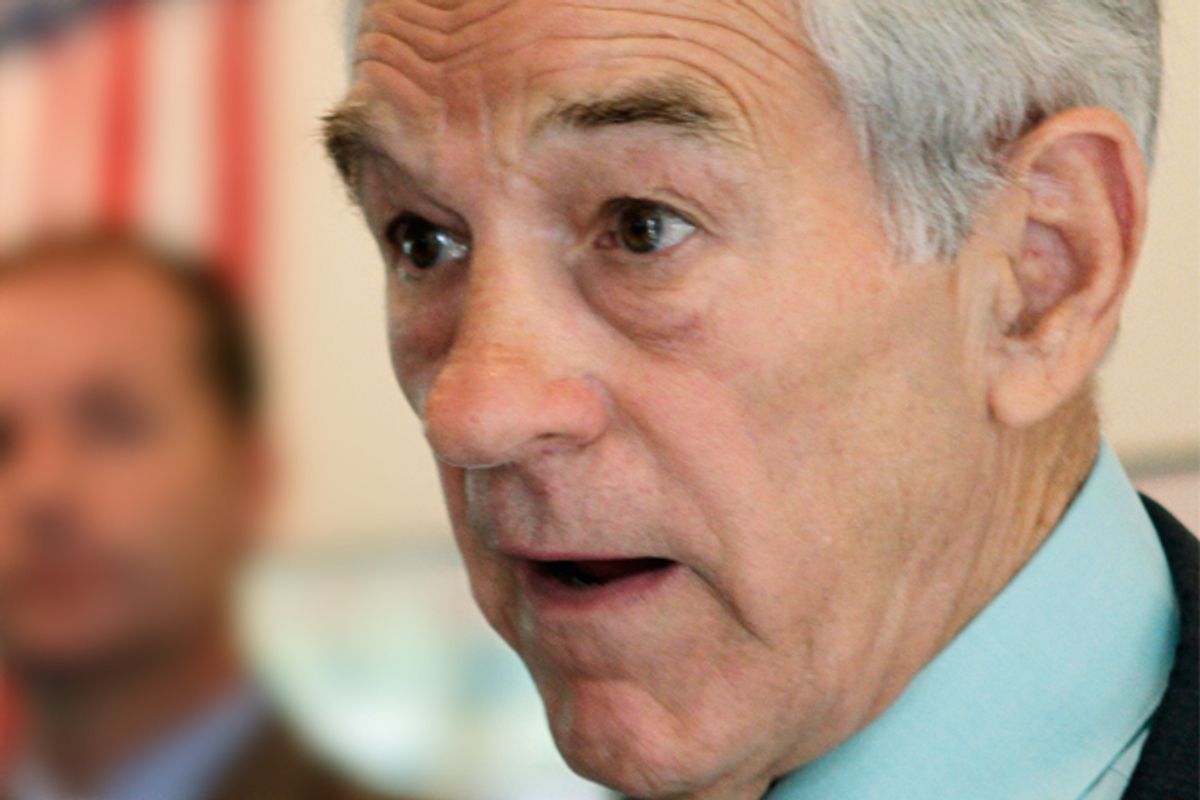 Has Ron Paul been shut out of the campaign by the MSM? Is there a conspiracy to silence the libertarian maverick despite his proven ability to raise millions of dollars and win Web polls? Washington Post ombudsman Patrick B. Pexton says his newspaper may be guilty of depriving Paul of coverage it's lavished on Michele Bachmann and even Newt Gingrich.

Still, The Post's coverage of Paul looks thin compared with its stories on Bachmann. In the past six months, The Post has published online or in print 34 staff-written stories plus 12 wire service stories on Bachmann, who has served not even five years in the House, and that doesn't count the blog posts about her on The Fix or Glenn Kessler's Fact Checkerpieces. The Post published 19 staff-written stories on former House speaker Newt Gingrich in that time, plus one wire story and many blog posts. On Paul, a congressman for more than 20 years, who was No. 2 in fundraising after Romney in the last report, The Post has published just three full stories, a couple more that had large sections on him along with other candidates, two wire stories and The Fix blog posts.

Pexton's conclusion: "The Post could have done much better on Ron Paul." (Of course he wants more "in-depth stories" on "the issues," because those vague prescriptions sound really good in an ombudsman column.)

Pexton, like most newspaper ombudsmen, is a doddering scold with a poor grasp of the complexities of the contemporary media landscape. While he's right that Ron Paul gets scant coverage in traditional reported newspaper articles, he should probably ask himself why he received so much Paul-related email that he decided to devote his column to the subject of whether or not the congressman was receiving enough "coverage" or not. Because Ron Paul is the president of the Internet. The Web is full of Ron Paul coverage, and it has been for years. Researchers have found that 75 percent of the Web traffic that isn't dedicated to torrenting porn is taken up by discussions of Ron Paul. (Researchers have not actually found that, because researchers are IGNORING THE RON PAUL RevolUTION.) The sort of people with whom Ron Paul's message resonates are already awash in coverage of Ron Paul. (And the sort of people who find his philosophy repulsive are similarly inundated.)

That surfeit of Ron Paul coverage has convinced Ron Paul acolytes that their fringe candidate, who stands no chance of winning the presidency, is in fact prevented from cruising to electoral victory solely by the fact that the media won't tell people about his inspiring message. As Maggie Haberman wrote last week, Paul supporters should be glad to receive haphazard MSM coverage. It means that Paul's many self-declared liberal supporters often don't actually realize how paleo-conservative the congressman can sound on abortion and civil rights. It means that fewer people heard his call to return to the glorious old days of pre-FEMA disaster response. The "fan club" quality of support for Ron Paul would be imperiled should his disillusioned former-Democrat supporters learn that there are libertarian candidates out there with "better" records and rhetoric on issues from immigration to reproductive rights. (There are plenty of them, for example, whose ideas about monetary policy are not quite so frozen in the amber of the Gilded Age.)