Sookie breaks a spell, frees Eric and quiets the violence -- but Bill and Antonia have another battle looming 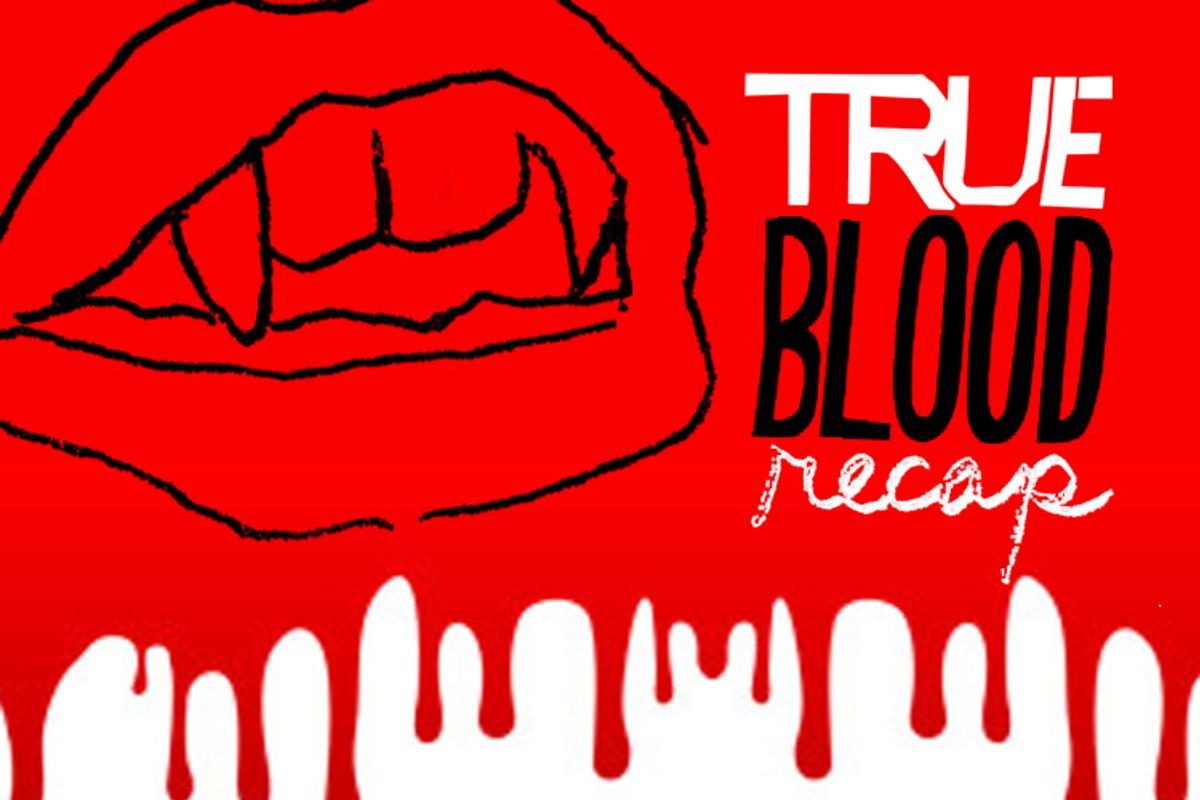 At the Festival of Tolerance, the sight of the vampire security forces massacred by necromancer Antonia's gang of witches and zombie vampires sends the human audience fleeing in panic. Antonia still has control of Eric's mind and she's commanded him to Kill Bill. A straight-up hockey brawl breaks out -- vampires attacking humans, witches killing vampires, Nan stabbing a zombie vamp, Eric attacking Bill. But Sookie weaves her way through the panic and jumps on Eric's back -- girl's got an odd approach to foreplay -- so Bill can pull back and shoot Eric with a silver bullet.

If Antonia's necromancy is so tight, how come she can't control Bill and Nan right now? Are they wearing tin-foil wigs?

Eric pulls the silver bullet out like a champ and goes back to rumbling with Bill. Sookie pleads with Eric to fight off Antonia's spell, but he tries to stake Bill instead. Eric is our favorite for a reason. Sookie, sensing her ménage à trois will never happen unless she takes charge, fairy-bombs Eric before he can shank Bill through the heart. When the impact releases Eric from Antonia's spell, he regains his free will along with all of his memories, including sexy time with Sookie. Pay attention to that little flashback, because that's all the naked you get in this episode.

Sookie's fairyhands didn't just free Eric, they broke Antonia's spell and the bloodshed stops. When Antonia sees how many humans were harmed in the massacre, she is aghast. Lady, this was your party. Antonia escapes out of Marnie for a second, then is reabsorbed. Bill and Eric call a truce, and Marnie vanishes with her entourage.

We check in on a post-coital Jason and Jessica, who fumble for their clothes in the truck bed. Jason feels guilty for having sex with his best friend's ex-, but Jess maintains that she's a free woman and they didn't do anything wrong. She's about had it with the bro-mance angle, which reminds me to go looking for the Hoyt/Jason slash-fiction that I know must exist. Jason lies through his teeth, claiming that he never would have tried to tap Bon Temps' finest redhead if she hadn't loaded him up with her blood first, and then asks her to glamor him so he can forget everything that happened -- pretty much the worst thing you can say after a first date. Jess, appropriately disgusted, storms off to find somebody to eat.

Over at the Wiccan slumber party, Antonia's imprisoned mutineers complain about how there's no cell-phone reception in the Moon Goddess Emporium, as if now is really the time to be playing Words With Friends. Tara and Holly vow to pit their own strong angry women powers against Antonia’s to break free. Antonia, warlock Roy and their two remaining zombie vampires re-appear and she rails at the imprisoned witches for being ungrateful to her for protecting them from "the night beasts." Nobody likes a martyr, Antonia. Then Marnie and Antonia start having a tense conversation, which is awkward since they are both muttering at each other out of the same mouth.

Back in Bill’s oval office, Nan wants to know why he’s has been holding out on her about "your little dairy maid and her lightning trick" but Bill brushes that aside, declaring that they are going after the necromancer by any means necessary, Nan's protests and vampire authorities be damned. Apparently, special Glamor Squads have been dispatched to Shreveport to erase memories of the Festival of Tolerance bloodbath. Out in the living room, Eric tells Sookie that although he remembers his former life, gentle new Eric is still part of him as well. "Can't you see him in my eyes?" he asks. I don't know, Eric. Maybe I could see him better in your pants. Sookie loves Eric, but she admits she also still loves Bill. "How is that possible?" Eric asks on our behalf. Sookie pulls the V-card, too, blaming her indecision on having the blood of both vampires in her veins. Those Stackhouse kids need to take responsibility. Thankfully, Pam bursts in and she and Eric enjoy a tearful reunion. Bill announces they'll blow up the Moon Goddess Emporium since fire kills witches, but Sookie protests that Tara and other humans are being held prisoner there. Too bad, toots. The vampires are silvering and going to ground, and the next night they'll finish Antonia once and for all.

After he intervened in Tommy’s vicious beating at the hands of Marcus’ wolfpack, Alcide tries to drive Tommy to the hospital, but Tommy knows the side effects of skin-walking are killing him and asks to be taken "home" to Merlotte's instead. He's barfing blood and it doesn't look good. Sam meets them outside the bar, frantic to save him, but Tommy wants to die and Alcide agrees he has the right. They lay Tommy out on the pool table like Morgan Earp in "Tombstone" and try to comfort him with stories about the beautiful light and loving people waiting for him on the other side. Tommy's skeptical: "There ain't no heaven, and hell's a dogfight." If Tommy doesn't die, he should start a metal band called Necromancer. Of course, there's already a metal band called Necromancer. They're big in Bulgaria. Tommy calls Sam a sucker for believing in angels. He is talking to a shapeshifter and a werewolf, but angels are out of the question. Tommy apologizes for all he's done wrong and Sam apologizes for not being a better brother, and Tommy -- though not his subplot! -- dies, with Sam vowing revenge on Marcus and his wolves.

It is daytime and Jason's drinking a beer, of course, when Hoyt comes over and asks if he can crash for a while since his house reminds him of Jessica. I love how we always see Jason drinking beer and watching football or banging chicks, never doing curls at the gym or anything. Jason has a Miller Lite throw pillow and a cooler full of beer in the living room, even though the refrigerator is 20 feet from the couch. Hoyt gets weepy reminiscing over Jess. Jason, guilt all over his face, squirms.

Over at the House of Bellefleurs, Andy wakes up to Terry waving a found vial of V and Arlene yelling about the children and the disgrace of an elected official being strung out on illegal drugs. Andy tries to deny the V is his. Disapproving cousin disapproves. Terry decides it's time that he and Andy take a little trip to Fort Bellefleur, Terry's old treehouse where apparently he lived "like an insane squirrel" after he came home from the war. Terry's clean now, "except the anti-psychotics," so he knows what Andy needs -- an intervention. At the treehouse, Terry uncovers an "A-Team"-style weapons stash and the cousins shoot cans while hashing out all of their family pain.

Jason comes over to Sookie's for brunch to avoid Hoyt, and Sookie enlists Jason to help her fight the witches and save Tara before Bill can blow up the Moon Goddess Emporium first. Jason has no idea what's gone down in the last 24 hours. Why would he? It's not like he's responsible for public safety or anything. They head over to Lafayette's to make a plan. Jesus points out that Marnie is a victim, too, and he wants to help her push Antonia out rather than fight.

Inside the Emporium, Holly finds a spell she thinks will break the force field, but Tara's not so sure they can pronounce all of the Latin words. Holly claims all they need is faith, but I think they might need a good pocket dictionary, too. Tara scoffs at faith, but Holly sensibly points out that there's a 400-year-old witch and two zombie vampires in the kitchen. Tara's going to get all precious over what she does and does not believe in? Wait 'til the angels show up.

In the kitchen, Marnie and Antonia struggle until Antonia's spirit rushes out of Marnie's mouth and takes shape so they can have a proper chat. Turns out Marnie is not an innocent vehicle here -- she wants to finish the job and kill all the vampires, and if human "collaborators" get in the way, they're toast. Antonia is sickened by the bloodshed. In what must be the worst "It Gets Better" clip ever, Marnie whines about being bullied for being different, saying, "you've been gone a long time, Antonia. I don't think you remember what people are really like." Antonia gives in, and back into Marnie she goes.

Outside, Sookie, Jason, Jesus and Lafayette pull up to find the surrounding neighborhood deserted. Is Jesus wearing a Members Only jacket? Call the Glamor Squad. Jesus approaches the Emporium, and Marnie/Antonia comes out for a standoff and makes Jesus breach the forcefield to prove his witchy powers. He turns into a horned demon, briefly ("It's a Latin thing," says Lafayette), makes it to the other side and disappears inside.

Gross Debbie is still gross. She and Marcus discuss Alcide over a joint. Debbie says she just wants to be a normal werewolf, you know, hang out in a pack, hunt, have babies, but Alcide doesn't want to bring another werewolf into this mess of a world. Marcus suggests that "a different wolf" knock Debbie up instead, wink-wink. Let's imagine Debbie as a mother. If you followed Courtney Love on Twitter, you know how that story's going to end. Good thing Marcus isn't at work, because Sam and Alcide bust into his shop and beat up one of his pack in his place.

Inside the emporium, Jesus appeals to Antonia to let him talk to Marnie. She did not just call Lafayette "the Moor." Antonia, you have been dead a while. Naturally, Antonia wants Lafayette's sweet medium magic. Antonia tells Jesus she speaks on Marnie’s behalf. This whole spirit/medium thing is really co-dependent. Finally, she lets Marnie speak for herself and she lays it all out for Jesus: "this is not possession, this is union!" Betrothed Wiccan viewers scramble to rewrite their handfasting vows.

Jesus telepaths what he's learned out to Sookie, while Tara and Holly chant their Latin in the other room. It's all a little "Teen Witch" with the spooky breeze and hocus pocus, but it works and the protection spell lifts long enough for Tara and Holly to run outside and get caught by the forcefield with Lafayette and Sookie. The girls and Lafayette are beamed back inside the building, leaving Jason flapping in the breeze.

Terry finishes Andy’s intervention by holding him down and making him promise not to do V anymore. Andy hits rock bottom, crying with shame, afraid that the V has eaten his soul. Terry reassures him that men without souls don't cry. Hugs and guns and I love you, man. Then Terry makes Andy walk all the way home. Ha!

Night falls. The mysterious authorities have finally allowed Eric to change out of the lumberjack clothes. He drives Bill, Pam and Jessica over to the Emporium, and they emerge from the car in slow-motion, clad in combat black and carrying flame throwers, like Wyatt Earp and the whole "Tombstone" gang headed into the OK Corral, while The Used's cover of "Burning Down the House" plays. Hold tight!