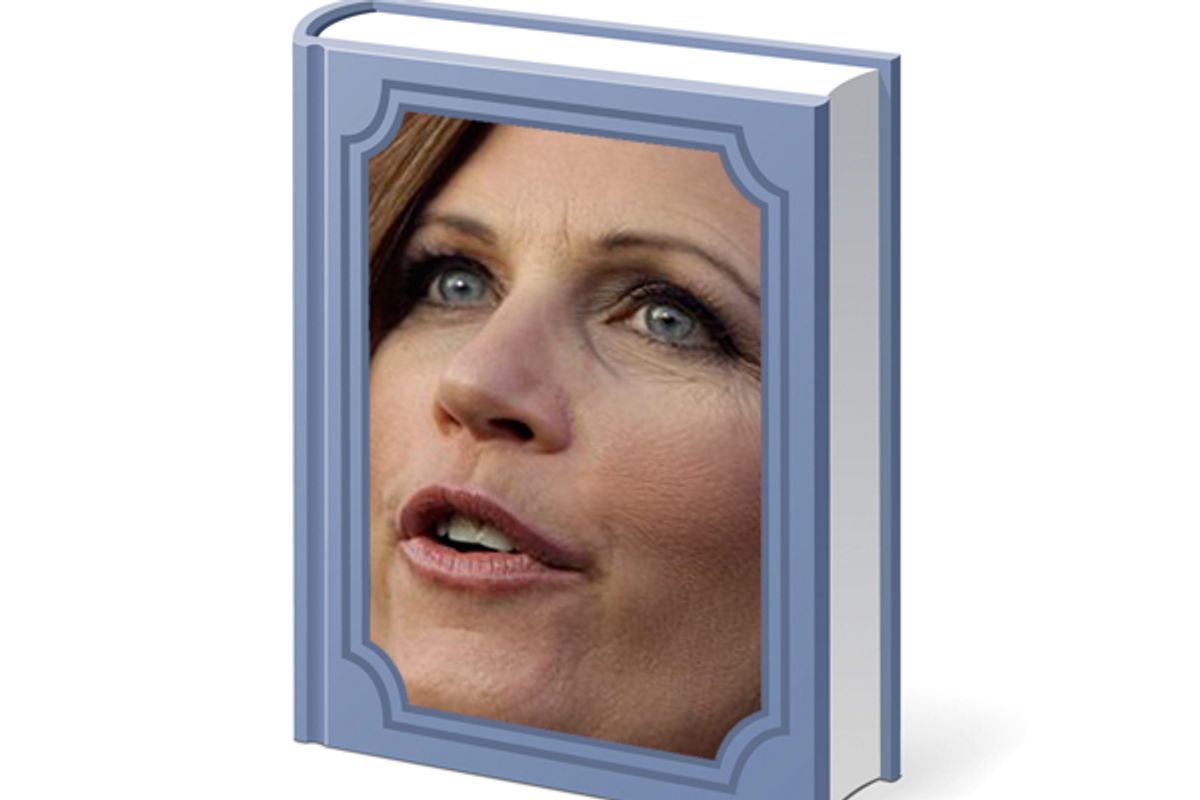 Michele Bachmann's got a book coming out! This is barely news -- her book deal with Penguin's conservative Sentinel imprint leaked in June -- but now it's apparently finished and ready for a November release, giving voters a full year to finish reading it before voting for her for president. Most presidential candidates churn out a "memoir" to drum up some easy press coverage. And most candidate memoirs are forgettable -- extended official bios destined to be read only by miserable campaign reporters.

But Bachmann's will be widely remarked upon, picked over by bloggers and journalists, and probably a best-seller. It will also be just a boring as Bill Richardson's "Between Worlds: The Making of an American Life." Because the book marks the completion of Michele Bachmann's transformation into an establishment candidate.

Here's one hint that the book won't be worth your time, from the AP: "Sentinel declined comment on reports that Wall Street Journal columnist John Fund co-wrote the memoir." Yep, John Fund. Longtime Wall Street Journal and American Spectator columnist John Fund. John Fund of regular attendance at Grover Norquist's Wednesday breakfasts and New York's Monday equivalent, and a long and undistinguished career of toeing the party line and cranking out sober propaganda for the business class of the conservative movement. If John Fund wrote this book, it will disappoint those looking for true nuttiness. (Sarah Palin, by contrast, hired a collaborator with a more colorful résumé.)

If the Michele Bachmann of 2006 were releasing a memoir, we'd have something to look forward to. Specifically, we'd have uncensored, unapologetic Dominionist fringe Christian right politics to look forward to, along with some obvious, glaring factual inaccuracies and probably some nice purple prose. If this is a John Fund book, though, it will have all the dishonesty with none of the charm. He's not the world's most thrilling author, and he was hired not to capture Bachmann's voice but to make it more professional.

Bachmann's already had all her entertaining edges smoothed out. She's on the trail doing an about-face on farm subsidies in Iowa. The clip of her saying "who likes white people" is actually a clip of her talking about "wet people," because of rain. The quote about God causing hurricanes to convince the government to stop spending was a bad joke, not a serious statement of sincere religious belief. She officially quit her controversial church, just like Barack Obama. She's practically ceding the gay-hating vote to Rick Santorum, declining to defend the strident bigotry that made her famous in Minnesota. At this point, she's a standard right-wing Republican with a nuttier-than-usual past. That nuttier-than-usual past has been well documented by journalists, and will be softened for mass consumption in her official campaign memoir. (Though maybe she'll clarify which Gore Vidal book made her a Republican.)

Bachmann dialed back on the anti-gay and antiabortion rhetoric once the Tea Party moment happened, sounding less like Pat Robertson and more like Ron Paul. Once she became a legitimate contender for the nomination, she went even more vanilla. The most interesting Bachmann stories of the summer have been about things she said and did years ago. She's boring now! Thank God Rick Perry's book came out before he made up his mind to run.

(Though Bachmann still probably believes all that horrible stuff. She's just smart enough not to say it out loud anymore.)