Why President Gore might have gone into Iraq after 9/11, too 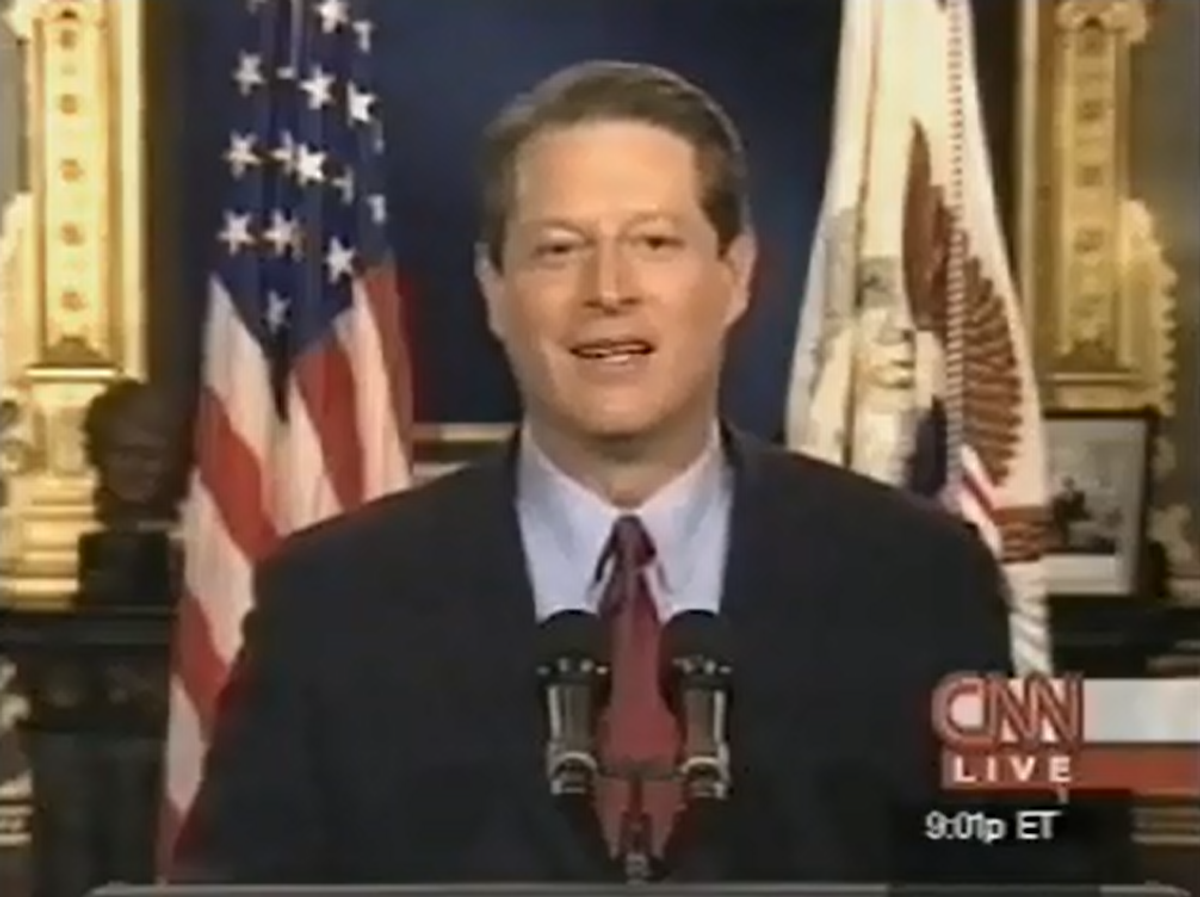 The tenth anniversary of 9/11 is almost upon us and the commemorations are well underway. So it’s probably not surprising that someone would commission a poll asking Americans how different they think world would now be if their country’s response had been guided not by George W. Bush but by Al Gore.

What is surprising is what the poll, conducted by "60 Minutes" and Vanity Fair, found: A clear majority of Americans -- 56 percent -- don’t really think anything would be different. This includes 62 percent of independents, 57 percent of Republicans and 48 percent of Democrats. Even among Democrats, only 44 percent say they thought the world would be a better place now if Gore had been in the White House back then.

If the numbers seem startling, it's because the "global war on terror" that Bush chose to launch in the wake of 9/11 has long seemed like an especially vivid affirmation of the truism that elections have consequences. You could argue that virtually any president would have signed off on the invasion of Afghanistan immediately after 9/11, but Iraq was a war of choice, and as Bush was making his case for it in the fall of 2002, Gore’s was perhaps the loudest voice in American politics saying, "No!" The question of whether the world would be much different today has President Gore been in power seems like an open and shut matter. How could it not be?

And yet, there actually is a strong case for the public’s skepticism.

It starts with remembering just how conditioned Americans in 2001 were to view Saddam Hussein as the source of much of the world’s evil and instability -- and just how easy and painless they had come to believe war was.

This was a product of the first Gulf War, which had been sold as a noble and necessary effort to check the aggression of a brutal tyrant with dreams of regional hegemony. "We’re dealing with Hitler revisited!" George H.W. Bush famously declared in the fall of 1990. Americans bought in and rejoiced when Operation Desert Storm ended with Hussein’s army evicted from Kuwait, and with surprisingly minimal Americans casualties.

But the ease with which victory was attained also led to hubris, and politicians from both parties, media commentators, and average voters spent the rest of the decade lamenting Bush’s failure to "finish the job" -- that is, to pivot when he had the chance from Kuwait to a full-scale invasion of Iraq that would have ended Hussein’s reign. Hussein’s own actions only encouraged this thinking. After the war, he quickly resumed his menacing posture, crushing a Kurdish uprising and taunting U.N. weapons inspectors for years to come. Americans were also told that he’d tried to arrange the assassination of Bush in 1993.

This explains why, during one inspection showdown in 1998, a Gallup poll found that nearly 70 percent of Americans wanted President Clinton to use airstrikes to target Hussein himself (instead of just his supposed weapons installations), and 60 percent wanted American ground forces to launch an invasion. Clinton, like Bush before him, recognized that this was "unfeasible," but he felt compelled to balance his desire to avoid war and occupation with voters' intense hatred and fear of the Iraqi madman. Thus, he attacked Hussein as aggressively in his speeches as Bush had, approved some airstrikes, and signed the Iraq Liberation Act of 1998, which put the U.S. government on record supporting regime change.

So while there were no Iraqi nationals on any of the 9/11 flights, it was easy for foreign policy hawks -- and, in particular, the neoconservatives who had long seen the forced removal Hussein as the first step in the democratization of the Middle East -- to convince the public that at least part of their thirst for vengeance should be directed at Hussein. It was only natural for Americans to assume that a man they saw as "Hitler revisited" must have some way, somehow been involved in the attacks on their homeland. And even if he hadn’t, well, surely he’d be behind the next one -- unless we acted now to stop him.

The story of how Bush bought into this is well-known. His instinct after 9/11 was too think big and aggressively, and his inner circle was littered with neocons and other hawks who’d been waiting for just the right opening to push for an invasion of Iraq. This, supposedly, would not have been the case in a Gore White House.

But look a little closer and you’ll realize that President Gore would have been hearing the same pleas. His own vice president would have been Joe Lieberman, perhaps the most hawkish Democrat in Washington on Middle East issues. Marty Peretz, his old friend and confidante, would have had Gore’s ear and filled it with arguments for going into Iraq. Loud, influential, non-conservative media voices -- like Tom Friedman and Peter Beinart -- would have amplified these calls on the outside. Republicans would have been screaming for an invasion, and the public would have been on their side. Clinton could barely hold them all back in the ‘90s; after 9/11, would Gore have stood a chance?

Here it's worth remembering Gore’s own history. In the 1980s, he made his name as a senator and presidential candidate by positioning himself as one of his party’s foremost hawks. One of the reasons, in fact, that Clinton put him on the Democratic ticket in 1992 was Gore’s vote for the Gulf War, which most Democrats had opposed. You could argue that Gore was a changed man by 2001 and 2002, and that he saw the world in a fundamentally different way, and maybe that’s true.

But it should be noted that when he announced his opposition to Bush’s war push in the fall of '02, Gore endorsed the basic goal of removing Hussein and securing his (supposed) WMD stockpiles. What he objected to was more the go-it-alone nature of Bush’s approach. In other words, you could also argue that Gore, still stung by the 2000 election outcome, may have been motivated in some way by his desire to stage a big, principled fight with Bush -- and that a different result in '00 might have produced a different, more hawkish response from Gore, one that would have led to … an invasion of Iraq.

Or we can give Gore the benefit of the doubt and say that he would have delivered the same speech opposing a war with Iraq even if he had been president -- and that he would have resisted overwhelming pressure from Republicans, the media, the general public, and even some members of his administration. Would the country’s war fever have eventually died down until Americans gratefully concluded that Gore had been right all along? Sure, it’s possible. But it seems more likely that the same taunts that haunted Bush throughout the '90s -- "He should have finished the job!" -- would have then dogged Gore, and that the political consequences would have been profound. Maybe Gore would have pushed through some new type of sanctions, or a few more rounds of weapons inspections. Hussein would have just thumbed his nose at all of this, and every time he did, the chorus in America would have grown louder: Why is President Gore letting this tyrant push us around -- especially when it could lead to another 9/11?!

If the 1991 Gulf War is what shook America’s Vietnam syndrome, then the occupation of Iraq is what shook the hubris that followed the Gulf War -- and made Gore and Clinton and George H.W. Bush look prophetic. But without the Iraq war, Gore’s wisdom probably would have gone unappreciated for years to come. If anything, it would have been a serious political liability -- the sort of thing that his Republican opponent in 2004 (John McCain? Bush again, anointed by a GOP still furious over the "stolen" election of 2000?) would have been well-positioned to exploit.

Obviously, it’s impossible to know what would have happened if Gore had been president on 9/11. But here’s guessing that, one way or another, America would have gotten the invasion of Iraq that it had been itching for since 1991.