Ex-senator Jim Talent is co-chair of a high-octane D.C. lobbying firm, but he hasn't disclosed who he works for 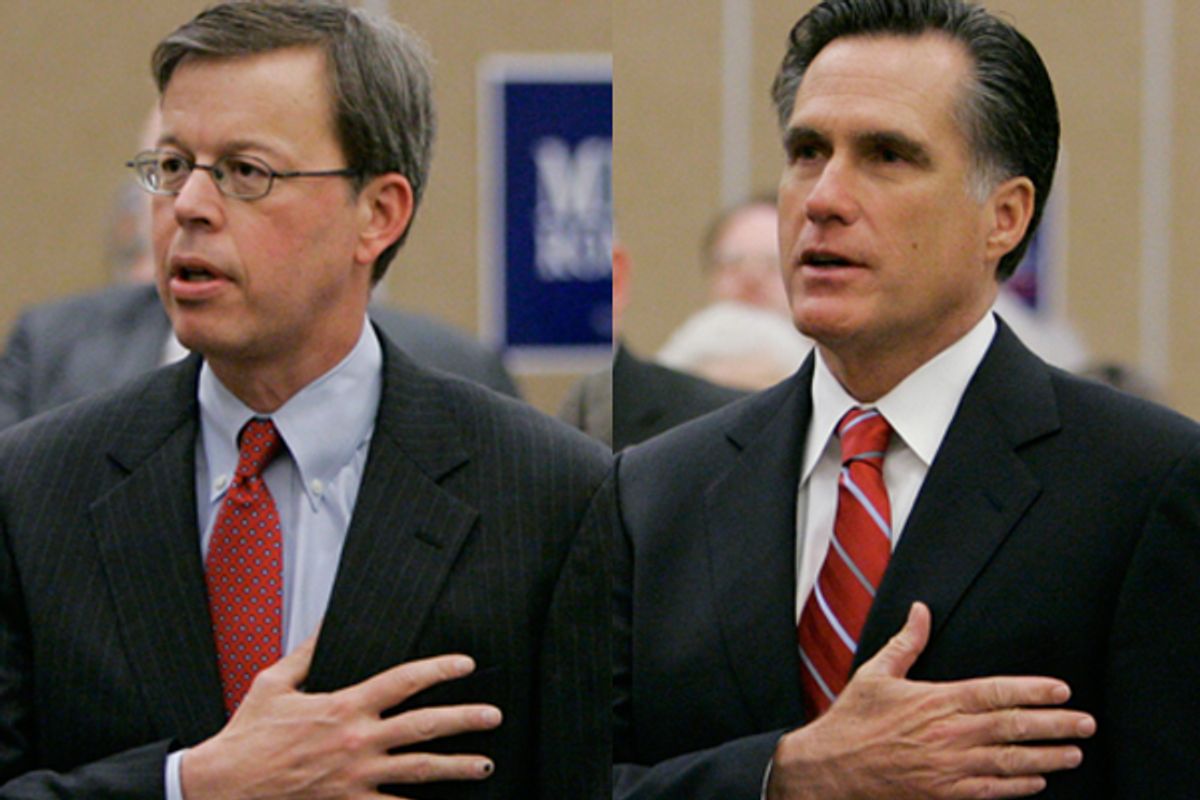 One of Mitt Romney's top advisers is the co-chairman of a powerful Washington lobbying firm but the identities of the corporate clients he works for are shrouded in mystery.

Former Sen. Jim Talent of Missouri has been acting as a Romney surrogate and adviser for months while also working at Mercury Public Affairs, a self-described "high-stakes public strategy firm" staffed by former members of Congress and Capitol Hill aides.

Mercury's website says that "lobbying" is among the five "actions" offered by Talent in areas ranging from finance and tax policy to defense and health-care. But he has not registered as a lobbyist and thus avoids legal disclosure requirements about who he works for.

We do know that in the past few years Mercury lobbyists have worked for Visa; Advent Financial Services, a Missouri firm that competes with payday lenders in the low-income credit market; Peabody Energy, the world's largest private-sector coal company, also based in Missouri; the St. Louis investment bank Stifel Financial; HP Enterprise Services, a division of Hewlett Packard that has large contracts with the U.S. military; the Center for Responsible Lending, a group that combats predatory lending practices; private hospital operator Vanguard Health Services; and ethanol producer Algenol.

Talent and Mercury did not respond to requests for comment. So it's not clear what sort of work Talent himself has been doing for Mercury.

Talent is not the only Romney aide doing corporate work on the side. Eric Ferhnstrom both advises Romney and does "strategic communications" for an unknown roster of companies through his Boston-based firm, Shawmut Group, Huffington Post recently reported. Ferhnstrom told HuffPo that the firm does not disclose clients as a matter of policy.

The involvement of lobbyists in his campaign has been an issue for Romney in the past. During his 2008 presidential bid, he had a famously prickly on-camera exchange with an Associated Press reporter who challenged Romney's claim that "I don't have lobbyists running my campaign." (In fact, lobbyist Ron Kaufman was playing a prominent role as a top Romney adviser.)

Talent has a long history with Romney. In 2008, he was chairman of the Romney for President Domestic Policy Task Force. A military policy expert and advocate for expanding the defense budget, his name has even been floated as a possible Secretary of Defense in a future Romney administration. This cycle, he is taking on a similarly robust role, writing op-eds for Romney, accompanying him on a Mideast trip earlier this year, fund raising for him, and devoting virtually his entire Twitter feed to promoting Romney.

It's also worth noting that Talent was a registered lobbyist for the law firm Arent Fox in 2001, during the brief period between his House and Senate careers. Shortly after losing his Senate reelection race in 2006, Talent joined Fleishman-Hillard Government Relations, which after a corporate reorganization became Mercury Public Affairs.

What category Talent fits into now -- he's not a registered lobbyist but Mercury says that he offers lobbying services -- remains unclear.