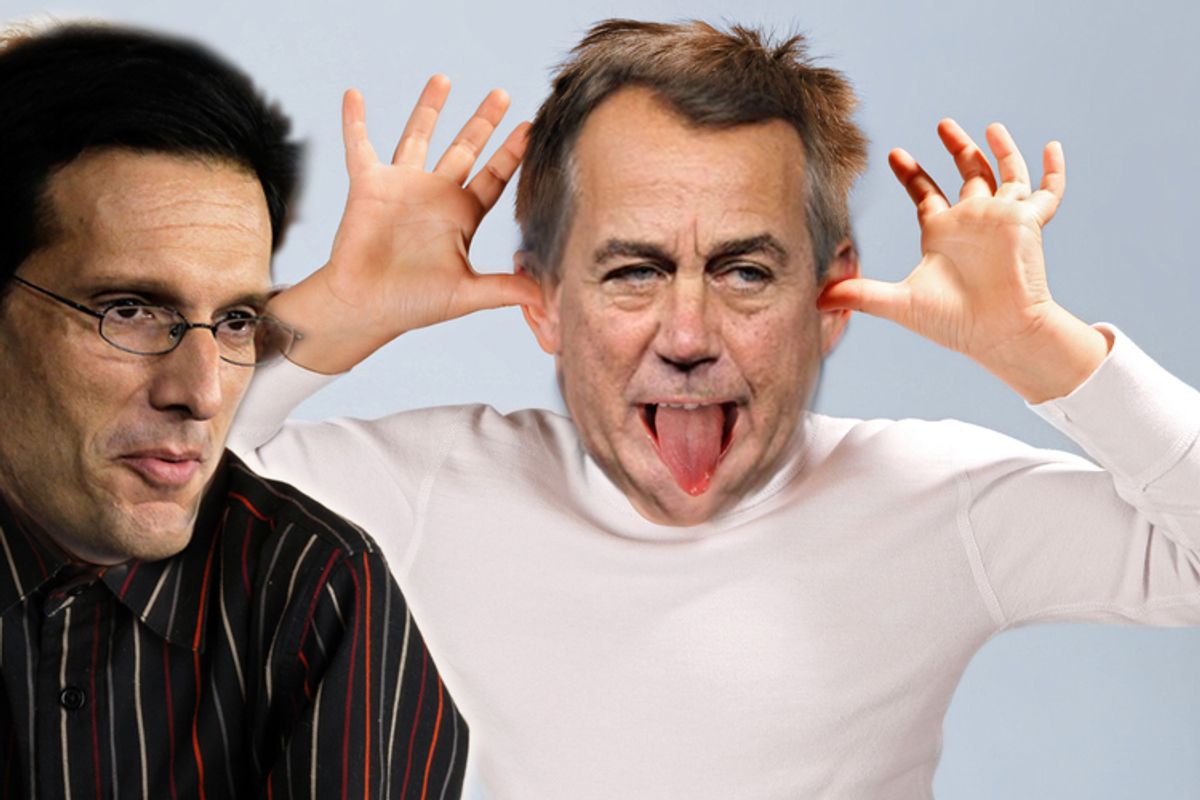 It's not surprising that President Obama is getting ready to launch a new job creation push. The economy is showing virtually no signs of life, his approval rating is falling to new lows, and with the next election just over a year away, his chances of being a one-termer are increasing with every piece of bad economic news. So sometime next week, Obama will unveil his plan in a prime-time speech, although some hints of what he may propose are now starting to leak out.

What would be surprising -- shocking, actually -- is if his push resulted in any meaningful jobs legislation being enacted. The Republicans who control Congress answer to a party base that is fanatically opposed to Obama and convinced that just one more cent in government spending could destroy the country. Obviously, this means no major new job-creating investments in, say, infrastructure are on the horizon. But it also means that House Republicans will fight Obama even if he proposes ideas that they have previously supported. We're already seeing this, with the GOP scrambling to invent reasons not to extend payroll tax cuts that are on the verge of expiring. Even if Obama and House Republicans ultimately agree on some kind of package, there's no reason to think it will have any significant impact on the economy between now and Election Day 2012.

So what's the point of even trying, then?

The answer has to do with Obama's much-discussed "adult in the room" strategy, which was on display in the recent debt ceiling impasse. The idea is that Obama can score points with swing voters by showing a willingness to compromise with Republicans -- and that if the GOP then rebuffs him, he'll only end up looking more reasonable.

Thus, in brief comments to reporters on Monday, Obama promised that his forthcoming jobs plan would feature "bipartisan ideas that ought to be the kind of proposals that everybody can get behind, no matter what your political affiliation might be." In other words, the sort of thing that will make Republicans look very unreasonable if they fight it (which they inevitably will), thus bolstering Obama's credentials as a non-ideological, solutions-oriented leader.

Of course, the end result of the debt ceiling showdown would seem to cast doubt on the wisdom of this kind of strategy. Obama made an elaborate show of offering a "grand bargain" to the GOP, angered some in his own party by dangling entitlement cuts, and was then snubbed by Republicans anyway. Only a last-minute, much smaller-scale deal headed off a default. But when the dust settled, Obama's approval ratings only dropped further, and there was no evidence at all of swing voters rewarding him for his maturity and reasonableness. As First Read, NBC's political tip sheet, put it on Tuesday morning:

One gets the sense Team Obama is surprised by how much damage the president suffered during the debt ceiling debate. Many folks in the president's circle thought he'd get more credit with the public for looking like the reasonable guy in the room. A miscalculation?

But Obama's poll numbers are only part of the equation, because the Republican Party suffered even worse damage as a result of the debt ceiling fight. Polls now show that the GOP's image is at its lowest level since the impeachment of President Clinton in 1998. Obama, in other words, managed to accomplish half of his goal: Voters may not be rewarding him for being reasonable, but they are punishing Republicans -- severely -- for being so unreasonable.

In this sense, the looming jobs fight offers Obama a chance to further drive down the GOP's standing (if that's even possible). And the more reviled the Republican Party is, the more it raises the possibility that Obama -- even if he himself is saddled with a poor economy and low poll numbers -- might manage to squeak through to a second term in 2012.

"Adult in the room" strategy may not be the right term for this. What Obama is really hoping is that voters in 2012 will end up rejecting the snotty, bratty, tantrum-prone child in the room.