Council calls for loyalist forces in Sirte to surrender in 4 days, while life in Tripoli remains difficult 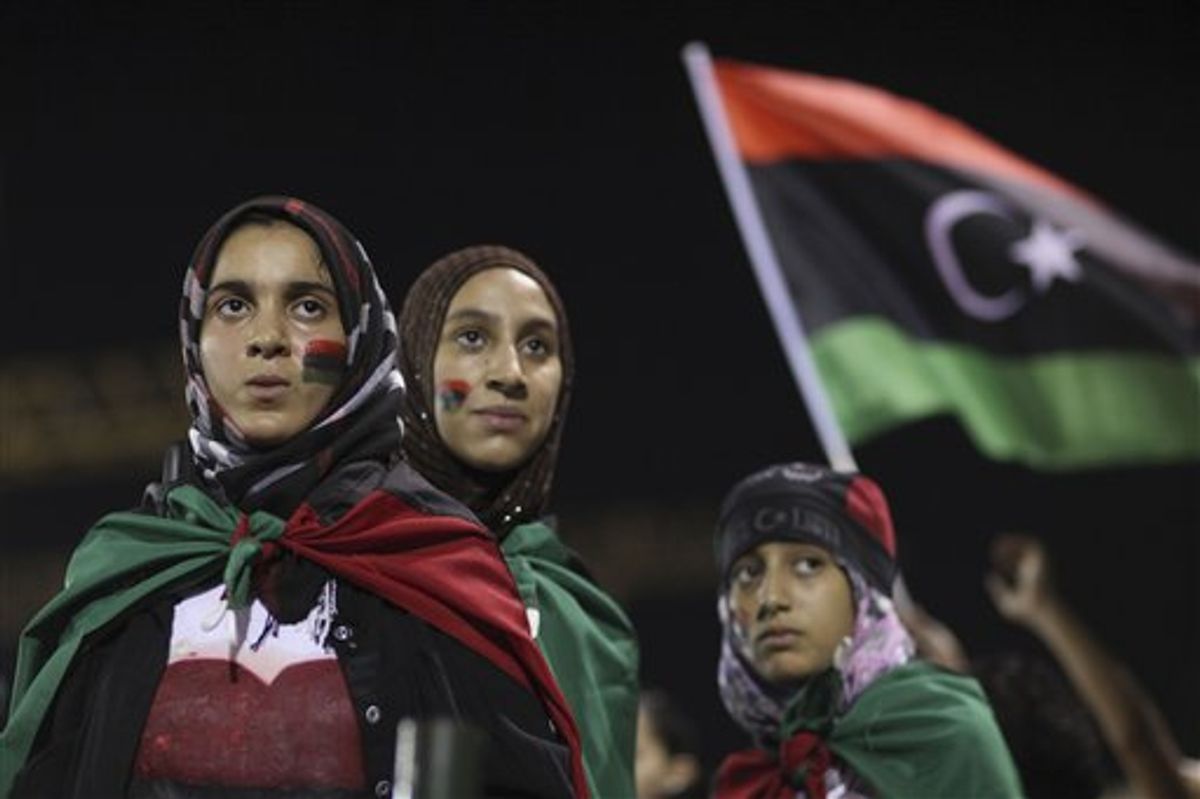 People demonstrate against Moammar Gadhafi at the Green Square in Tripoli, Libya, late Tuesday, Aug. 30, 2011. Libyan rebels say they're closing in on Gadhafi and issued an ultimatum Tuesday to regime loyalists in the fugitive dictator's hometown of Sirte, his main remaining bastion: surrender this weekend or face an attack. (AP Photo/Alexandre Meneghini) (AP)
--

TRIPOLI, Libya — Libya's rebels are finding solutions to the shortages of food and fuel here, and they have also issued a deadline for Col Muammar Gaddafi's troops to surrender from the former dictator's hometown of Sirte.

Rebel officials warned Gaddafi loyalists to lay down their weapons by Saturday or face attack from the 10,000 troops that now surround the city.

Rebel forces have been reluctant to advance further for fear of civilian casualties. The National Transitional Council has been struggling to instead negotiate a peaceful end to the conflict, but hopes of a final surrender are fading.

"Unfortunately, to preserve blood sometimes you have to shed blood," said deputy prime minister of the NTC, Ali Tarhouni, in a press conference in Tripoli. "The sooner we get this done, the less blood that will be shed."

Tarhouni said the situation in Libya's capital is stable and improving daily, but some frustration was beginning to show in the streets as shortages of fuel, food and water threatened to dampen Wednesday's Eid celebrations.

At one gas station a line of cars stretched for several blocks. As some banks begin to open for the first time in weeks, hundreds lined up outside waiting for up to four hours to withdraw their limit of 250 dinar (about $210). In the afternoon humidity, some began to feel the frustration of months without salaries.

"My children are hungry and I haven't been paid in 4 months," said Fatima Mohammed as she waited in line for water.

Others were more optimistic.

"There are hardships but for the first time we can smell freedom in the air; we can taste it," said Kariha Mahfode, a mother of three as she shopped for tomorrows Eid celebrations. "The prices are very high, but we've managed."

Tarhouni, who is also the minister of oil and finance, said solutions to Tripoli's shortages were just days away. With a United Nations agreement to unfreeze $1.5 billion in Libyan assets and a loan of $350 million from the UAE, Tarhouni announced government salaries would commence again in the coming days.

The fuel crisis was also nearing its end, he said, with oil fields set to be pumping again at a "close to normal rate" by the end of the week. In the meantime the NTC is in the process of shipping and piping fuel, gas and diesel to all liberated areas and prices should come down soon.

Over the past three months the price of gasoline has risen from 15 cents to around US$4 per liter. Cooking gas was once US$2.50 in the capital. These days the same 20 kilogram bottle sells for a staggering US$250 if you manage to find one. Consumers say the price of some food products is now 10 times what it was a few months ago.

Tarhouni said water supplies would also be restored to the capital shortly. Repair work began 3 days ago on wells that form the major source of Tripoli's water supply. These were sabotaged by Gaddafi loyalist as they fled south from Tripoli, he said.

Amid rumors that Gaddafi is sheltering in either the town of Sabha or his hometown of Sirte, Tarhouni announced that the NTC had a "very good idea" where he is: "We have no doubt we will catch him."

As rebels planned their advance on Sirte, NATO also vowed to continue their support.

In a press conference in Naples, NATO spokesperson Col Roland Lavoie said Gaddafi still appeared to be in control of his ground forces.

"The pro-Gaddafi troops that we see are not in total disarray, they are retreating in an orderly fashion," he said adding Gaddafi was still demonstrating his "capability to exercise some level of control and command."

NATO have been assisting rebel ground troops with air and missle strikes under a U.N. Security Council mandate since March 19.

As the last day of Ramadan fasting reached an end, the mood in the streets began to lighten. Rows of shops in the center of Tripoli opened their doors for the first time and families began emerging from their homes to celebrate in the streets, singing songs of freedom and chanting anti-Gaddafi slogans.

A group of children sang from a car window, "Sorry, scruffy hair" — a nickname for Gaddafi that has become popular since the revolution began.

By dark thousands of Libyans, including families with small children, gathered in Martyrs' Square to celebrate Eid and the end of Gaddafi's rule in Tripoli.