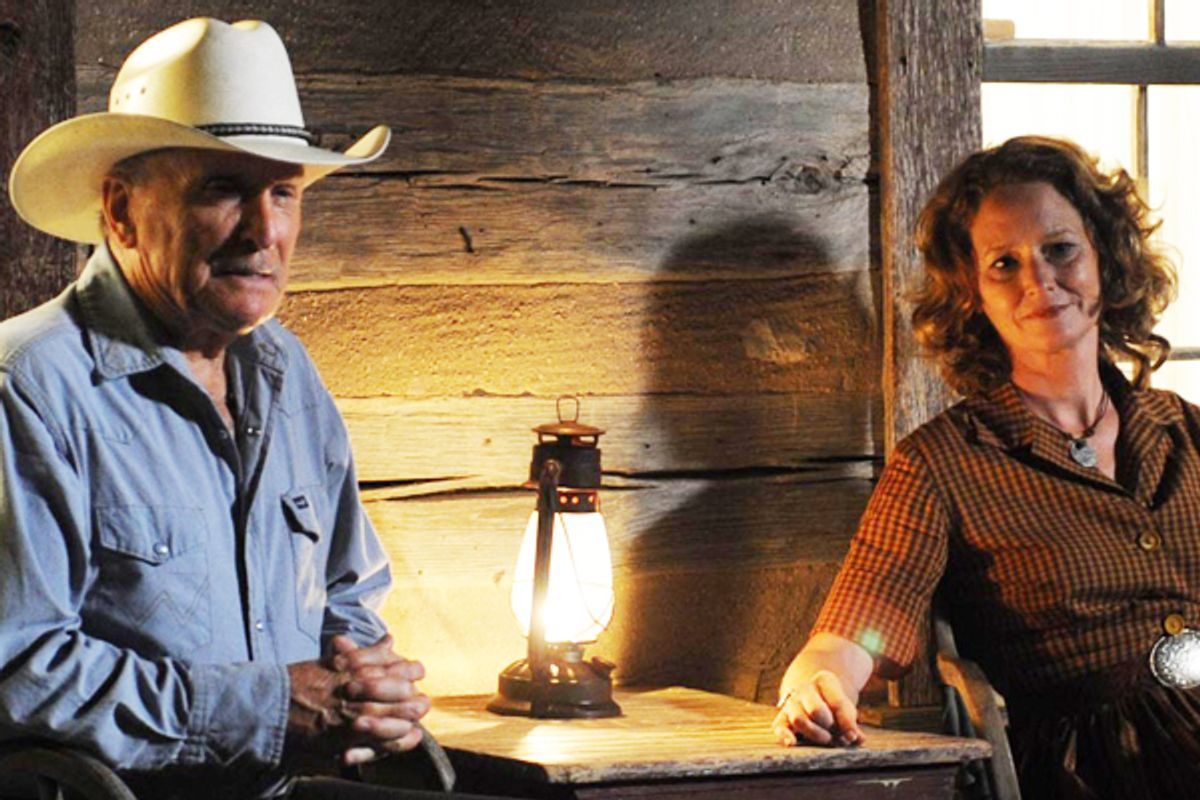 Robert Duvall and Melissa Leo in "Seven Days in Utopia"
--

It may be easy (and perhaps un-Christian) to be cynical toward faith-based filmmaking. But "Seven Days in Utopia" is flawed in so many ways -- the editing, writing, acting and Matthew Dean Russell's direction are uniformly weak -- that this well-intentioned film does its positive messages a disservice.

This sermon masquerading as a sports film is focused on building confidence in all those young Christian soldiers who probably passed on the female-centric "Soul Surfer" earlier this year -- another mainstream family film with Christian themes that relies on cheap sentiment and fails to challenge audiences at all. This one also squanders the presence of Oscar winners Robert Duvall and Melissa Leo.

Russell cudgels viewers with inspirational homilies, uplifting music -- one song is actually called “Born Again” -- and visuals that have a honeyed Texas glow. There are at least a dozen references to God, and the big dramatic golf game is described by one sportscaster as “a real David vs. Goliath match.” Subtle it ain’t.

The story begins when Luke Chisholm (Lucas Black), an up-and-coming pro golfer, suffers an embarrassing meltdown on the green. After the game, he hits another hazard when his car crashes through a fence in the title Texas town. Luke is literally and spiritually saved by Johnny Crawford -- note his initials -- played by Duvall, who teaches him to "See, Feel and Trust."

The bulk of "Seven Days in Utopia" consists of a series of scenes where Johnny instructs Luke "Mr. Miyagi-style." He takes the golfer fly-fishing so he can practice rhythm, balance and patience. He forces Luke to land a plane to teach him grace under pressure. Yet these scenes, designed to prepare Luke for the unexpected, are entirely predictable and clumsily presented.

Only slightly less understated is a metaphoric scene in which the comely horse-whisperer Sarah (Deborah Ann Woll) demonstrates the idea of freedom to Luke by releasing fireflies trapped in a jar. Sarah is Luke’s would-be love interest, except that she tells him "Not yet" when he leans in for a kiss. Then, in the film’s most unintentionally hilarious line -- no doubt intended to suggest the sacredness of abstinence -- she adds, "That doesn’t mean never."

The lame script aside, perhaps the biggest drawback is that the protagonist is about as edgy as his golf ball. Black makes Luke’s transformation go from bland to blander. In order for his deliverance to work, the character needs to start out as a smug/cocky good ol’ boy -- think Matthew McConaughey or George W. Bush. Black reads more like he's trying to beat out Kirk Cameron for altar boy.

And it’s simply depressing to watch the aging Duvall -- Black’s "Get Low" costar --slumming here, yet again playing an ex-alcoholic. Viewers will long for his far superior spiritual film, "The Apostle." Melissa Leo is also wasted in her few scenes as Sarah’s mother, who does little more than smile beatifically. One of the film’s pressing questions may be this: Why did these talented performers agree to appear in this piece of hokum?

The other question comes at the end of the film, with a link to a website that appears on the screen in the hope of continuing the conversation about an ambiguous plot point. That site might provide viewers with golf tips. But it’s more likely that it directs folks to their nearest mega-church.