There's an easy solution to information overload: Go back to the "stupid" cellphone you've left behind 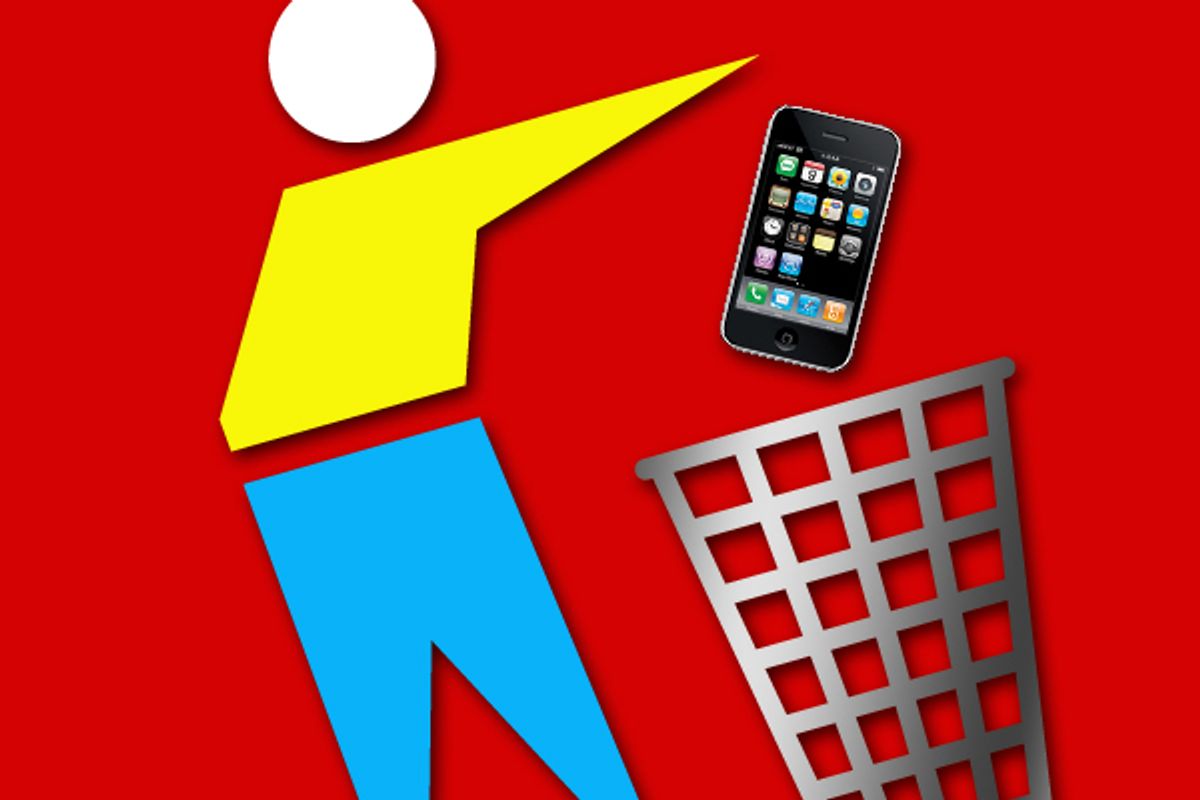 A miracle is occurring as you read these words -- that's right, an impossible-to-explain miracle of the mind. Somehow, you just managed to read a complete sentence, and that's nearly inexplicable these days.

There you sit, hammered by stimuli: On your computer screen, you're pounded by an overflowing RSS reader, twitching Facebook and Twitter feeds, an email box constantly chirping at you and IM bubbles doing their best pop-up video impression; off in the distance, your television frantically flits between images of explosions and a screaming, overcoiffed suit whose impossibly fat head floats disembodied above a never ending ticker-tape; and on your desk, face up, a cellphone perpetually spasming with text messages, photos from friends, yet more email and, of course, phone calls.

And yet amid this miasma, somehow, some way, you managed to read this last paragraph.

It's a miracle, I tell you.

Of course, if you've gotten this far (a huge "if"), you probably don't feel so divine. Most likely, you feel uncomfortable -- anxious, even -- having now spent time actually focusing on one single essay, rather than doing the usual frantic info trawl now required of us all in this gloriously awful Digital Age.

Those pangs in your stomach, and that quickening heart rate -- that's the "Long Walk" quality to all of it, the impending-sense-of-doom feeling that if you don't maintain a certain minimum speed of data consumption on the Information Superhighway, something awful will happen. And that feeling is to be expected. The science is pretty clear in showing that the Internet is rewiring our cerebral circuitry and remelting our plasticky gray matter in ways that can addict us to the short information bursts that the Internet specializes in. The extent of this rewiring and the potential long-term negative consequences of it are still debatable. But what's not debatable is the fact that without those sustained information bursts, 21st century information addicts tend to tweak out.

Since you are, after all, a key target in the corporate battle for mindshare, and since the perpetrators of that battle are deliberately trying to addict you to information, your tweaking out in connectivity-deprived situations is predictable. Indeed, it is the classic presentation of a new kind of post-traumatic stress disorder. Only there's nothing "post" about it; it seems like an ongoing condition we can call Information Disease. It makes you increasingly fret that when it's your time to leave this earthly plane, if you aren't lucky enough to pass away in your sleep, you'll almost certainly drop dead mid-Google search.

So, what to do? Is there any secret weapon to help prevent you from being yet another casualty in the info wars, but also keep you adequately connected to the world around you? Or is it simply a choice between "Tron" and "Castaway" -- between submitting to a life wholly inside the mainframe, or going hermit?

The good news is that it doesn't have to be so binary, and the even better news is that one of the instruments that can help you get closer to that ineffable middle ground is not some newfangled, super-expensive machine or drug. On the contrary, it's a technology that has been around for almost 20 years, a technology that gives you basic cellular voice and text messaging service, but nothing else. It's called the stupidphone. You remember these gems, right? They're the pre-iPhone mobile devices almost all cellphone owners had just a few years ago -- the ones that are basically just phones, but not full-fledged mini computers.

More advanced than Gordon Gekko's brick-size clunker, but significantly dumber than the average smartphone, the stupidphone gives most of us the untethered connectivity we need while blocking us from the needless-yet-alluring compulsions we most certainly don't. To illustrate this point, see these recent poll results from the Pew Internet and American Life Project:

Look carefully at the differences among activities such as sending pictures and videos, playing games, downloading apps, playing music, accessing a social networking site, and tweeting -- that is, activities that few can claim a need to do. Here we see the gaping Frivolity Gap, as users of smartphones are doing these things at far higher rates than their stupidphone counterparts.

Of course, such frivolous online activities can be fun for a time, but they also inherently require the particular kind of cognitive bandwidth that is creating all the negative side effects (ADD, anxiety, not being psychologically present in social settings, etc.) associated with the digital age. It's one thing to have these activities perpetually calling to you on your laptop and/or desktop, when at least you are in a physical state of work/online-ness. But to have them on your person at all times can easily transform you from someone who possesses necessary connectivity into someone who has full-on Information Disease.

With the stupidphone, by contrast, you remain connected in the most important ways for anyone who needs to get ahold of you (text message and voice), but there's far less of the other stuff that threatens to transport you to that truly problematic psychological place.

Today, somewhere between a quarter and a third of all American cellphone users have smartphones. But that number is growing thanks to three factors: 1) genuine necessity, by virtue of one's work, 2) aggressive marketing campaigns by telecom companies, and 3) the superficial consumer appeal of the devices' overfunctionality.

Obviously, if you are one of the relatively few people affected by Factor 1, you have little choice. But let's remember: While lots of people will insist they need a smartphone, there are very few people for whom that's really true. Most people -- and that includes most people with high-stress on-demand jobs -- do not truly require more connectivity than what a stupidphone can provide. They just say they do as a public justification for their addiction (and this is likely true even for most of the two-thirds of employees who say their boss emails them over the weekend and expects a reply -- after all, most stupidphones can get to a rudimentary version of the Internet in emergencies, laptop Wi-Fi is ubiquitous in America, many such employees are usually no more than a few hours between checks of their own desktop email -- and this says nothing of the fact that many bosses email over the weekend and expect a result precisely because they know their employees have opted for the hyperconnectivity of a smartphone).

That means for the vast majority of cellphone users who do have a choice, the choice should be clear if you want to do what you can to prevent Information Disease.

Now, it's certainly true: with cellphones only one of many information conduits, stupidphones aren't a perfect panacea (and I have a sneaking suspicion they will ultimately be completely phased out and unavailable because they don't guarantee as much data transfer -- and therefore telecom company profit -- as smartphones). But they surely help create some modicum of necessary but not-too-draconian protections in a world where the specific mix of mobility and hyperconnectivity is the most powerful factor in Information Disease's spread.

As a happy stupidphone owner who has made the deliberate and calculated decision to resist the smartphone (even in the face of end-of-contract deals/sales pitches that are all but trying to force the iPhone on me), I can tell you that your stupidphone choice will come with downsides. For instance, it will occasionally get you labeled a Luddite. Inevitably, you'll get ribbed by colleagues who see your phone and then crack bad nostalgia-themed jokes about those old giant phones from the 1980s that you had to carry in a briefcase.

But you have to take the style questions out of it, and think of it in friendship terms. The stupidphone is the oblivious-but-happy, dumb-but-helpful, fun-but-not-cool drinking buddy -- the guy who might not be the best conversationalist, might not challenge you to think all that hard, and might not wear the most hip clothing, but the guy you can always rely on for the basics. By contrast, the smartphone is the brilliant, overstressed, know-it-all, custom-suited Yuppie that you initially thought would be your BFF, but you ultimately can't stand being around because he won't shut up.

Go with the former, and reject the latter; it's a more healthy relationship in the long run.