Way down in the hole

Arrested at a pipeline protest at the White House, I understood civil disobedience after baking in a D.C. jail 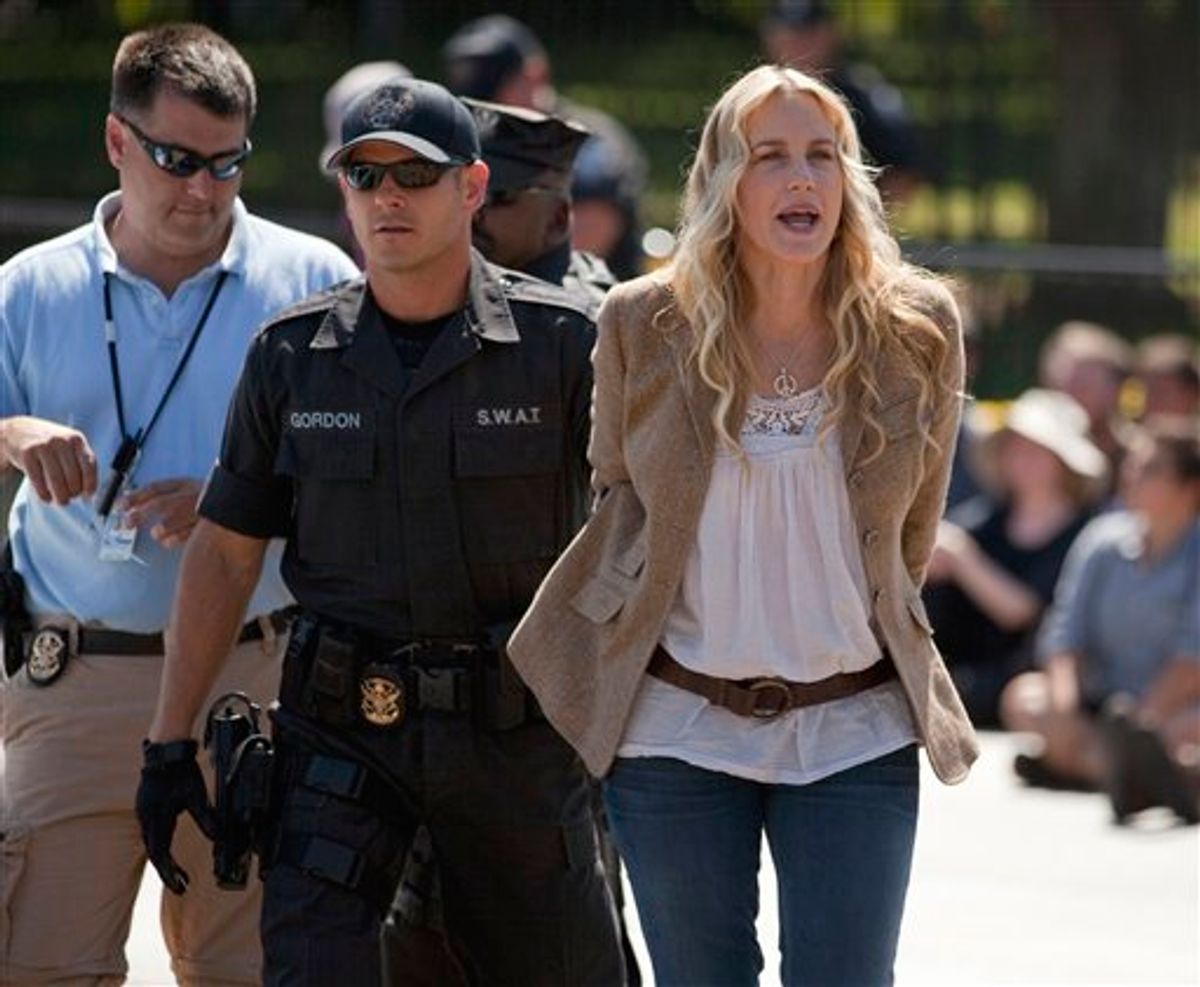 Actress Daryl Hannah is arrested by U.S. Park Police in front of the White House in Washington, Tuesday, Aug. 30, 2011, during a protest against the Keystone oil pipeline. (AP Photo/Evan Vucci) (AP)
--

Bill McKibben and others encouraged us to dress well for the White House protest demonstration against the Keystone XL pipeline on Aug. 20. Some followed this advice. He and other prominent members of our group planning to get arrested in protest of the proposed tar sands project in Canada wore suits or sports jackets. While this made for a good photo opportunity, in front of the White House, the fine duds proved an unfortunate wardrobe choice after the Park Police led us to the paddy wagons. "Boy, those things are going to be hot," I thought while waiting for an officer to arrest me. We spent over an hour in the vehicles waiting to take us to the Anacostia station, and another half-hour in the station parking lot where we waited for processing. Sweat poured off our bodies, but with our hands cuffed behind us, we were unable to wipe our brows. I was thinking maybe civil disobedience isn't as glamorous as I thought.

We expected the Park Police to arrest and release us after a short stay in custody and a modest fine. Jail, said the action organizers, was a possibility but we would most likely be out by late afternoon. Wrong. Instead, our arrest on Pennsylvania Avenue began a two-and-a-half day ordeal that illustrated how the authorities tried -- and failed -- to deter future protests, which have been going on ever since and will conclude on Sept. 4.

After taking our belongings and removing our belts and shoelaces, the police asked us for personal information before leading us to a 6-by-7-foot holding room. It was Saturday morning and the protesters already there informed us we would be held until Monday. We surmised this was an attempt to intimidate other protesters from participating in the action. Sure enough, the police led more and more protesters into the room, as if it were some sort of clown car. Eventually, 15 of us were stuffed into the tiny room where we waited for nearly six hours. Since there was not enough room for everyone to sit, even on the floor, we rotated standing and sitting.

I consoled myself with the thought of our next destination, the D.C. Central Cell Block. Surely, it would be better than this. A small cell, no doubt, but at least there would be fewer of us crammed into such a small space. In reality, the cellblock proved even worse. We descended into the facility via a long ramp into a dark underground parking lot. Once there, the guards, in a businesslike manner, frisked us, removed our cuffs and led us to our cells. Except for a brief time in a nearby room to have my photograph taken and have my finger- and palm prints scanned, I didn't leave this cell for the next 35 hours. Apparently, every D.C.-area detention facility is bad, I learned, but bad in its own way.

My cell, 5 feet by 6, and encased in metal, resembled the interior of a large oven with the racks removed. There was a small metal sink and toilet. For sleeping and sitting, we had two metal beds -- sort of like giant metal cookie sheets. Imagine being in a non-air-conditioned attic on a hot afternoon and then staying there for the next day and a half. Most of us spent the time shirtless; others stripped down to their underwear. The fluorescent light, shielded behind bars and brownish-opaque plastic, stayed on 24 hours a day. This made sleeping almost impossible. Yet after a day in the cell, the light was a blessing; it helped keep the cockroaches at bay.

I expected the proverbial bread and water, but even this proved wishful thinking. Twice a day, the guards brought one bologna or cheese sandwich for us to eat and a small cup of water to drink. The first sandwich was so foul, I didn't finish it or eat anything else for the next two days. There was water from the sink, but even the guards couldn't agree whether it was potable. I drank it anyway, fearing dehydration more than sickness.

The worst part was the ceaseless, utter boredom. From jailhouse documentaries, I recall inmates watching TV or reading a book. Not here. We could speak with our cellmates, and to a lesser degree, the other people on our cellblock. Veteran environmentalist Gus Speth gave an impromptu lecture on his new book. McKibben told us about the experience of civil rights protesters in Southern jails during the 1960s. But for much of the time, we had little but our thoughts to occupy us. In the endless hours, I understood, the price of civil disobedience is real. It entails surrendering your body to the whims of authorities. Your body bears the brunt of the discomfort. Stripped of possessions, refused contact with loved ones, and denied most freedoms, one must simply endure. Anybody who says getting arrested is a cheap gesture should try it.

The guards appeared at 6:30 a.m. on Monday, quickly led us out of our cells, placed us in cuffs once again, and ferried us a couple blocks to the courthouse. Unlike two days ago, I now craved contact with the other protesters, even if it was in a small holding room. At least we would be together.

Like the D.C. Central Cell Block, the holding facility in the District of Columbia courthouse in Judiciary Square is also underground. Rather than the dungeon-like design of our previous detention center, the courthouse jail was brightly lit with white walls and red bars, sort of like a suburban Target box store. The guards here were a different breed from the ones at the Central Cell Block. U.S. marshals provide security at federal courthouses and look like Navy SEALs. I was growing weary of being handled by the various authorities. They frisked each of us again, removed our cuffs and placed us in leg irons. It was clear we should not trifle with the U.S. marshals. While being frisked, one member of our group chuckled. Bad idea. A marshal barked at him, "Stop laughing! I don't care if you're a protester -- I'll beat your fucking ass!"

We shuffled into a large cell, a relief after so many hours in cramped quarters. But the marshals kept leading more and more people to the holding pen until it was nearly as cramped as our earlier cells, except this time there were more than 50 people in the same space. There, we languished hour upon hour, with no water or food, waiting to see a judge. One inmate in an orange prison suit being led past us in leg shackles and cuffs took one look at us and shouted, "That's what you get for protesting!" Everybody laughed. He had a point.

Then, much to our delight, at 3:00, the women from our group -- whom we hadn't seen in nearly two days -- passed our cell without shackles while we cheered loudly. The rest of us were giddy, hoping we'd soon join them.

Then, in groups of six or so, they took us out of the cell and removed our leg irons. Even without them, we were expected to walk with our hands behind our backs. A silent marshal led us through a set of doors. I passed through and kept walking. With my hands still behind me, I stopped and noticed the guard was no longer beside me. I dropped my hands and realized I was in the lobby of the courthouse.

We strode onto the courthouse square and into the brilliant late afternoon sunlight. Dozens of people greeted us with food and drink. I embraced some I hadn't seen for days and even strangers who wanted to offer thanks. I stood around for a few minutes saying goodbyes before walking off alone.

As I wandered along the National Mall, I reflected on the grueling ordeal and didn't regret it for a moment. It stiffened my resolve to fight the Keystone XL pipeline and to support the climate movement. I felt proud to join such inspiring everyday citizens and wondered how many people like them the authorities will detain in future climate actions. I left the courthouse fortified by the resolve of these people willing to sacrifice their daily comfort to impede our headlong rush toward climate chaos. For the first time in a long while, I felt hope.

Bob Wilson is an associate professor of geography in the Maxwell School of Citizenship and Public Affairs at Syracuse University.