Behind the the myth of humanitarian intervention, a multinational land grab 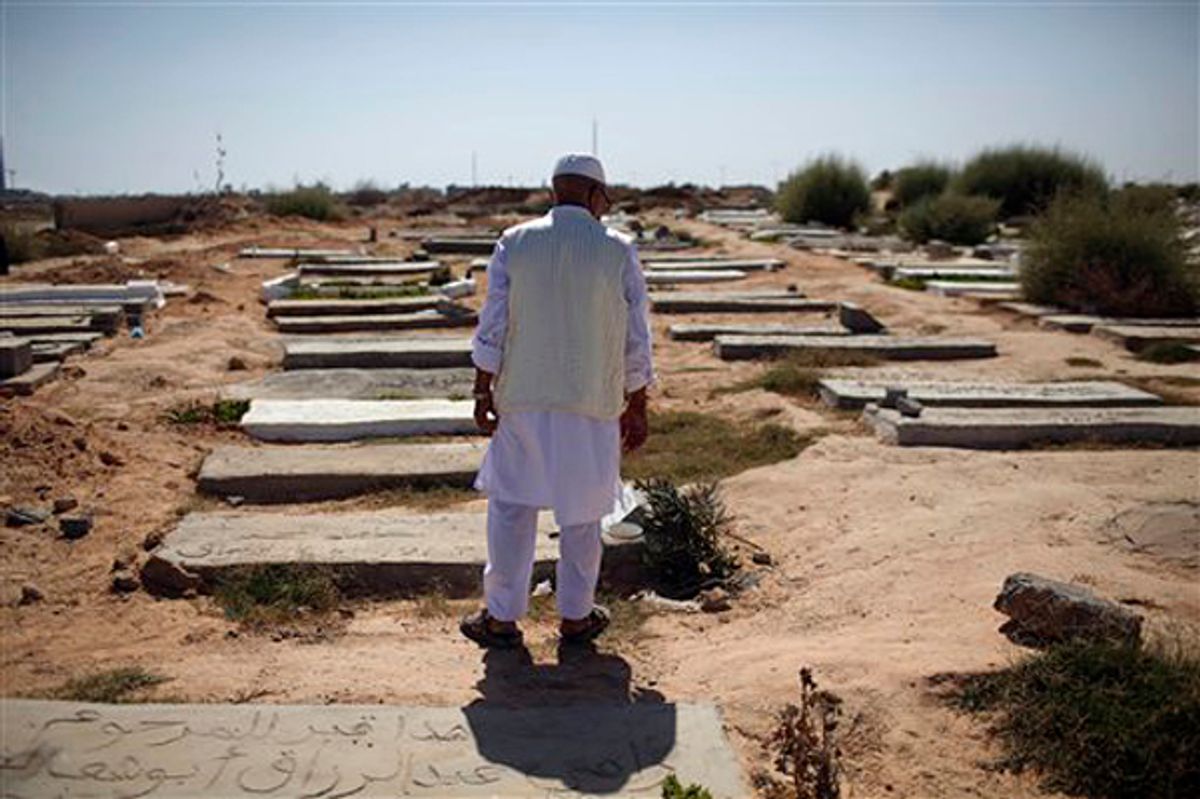 Mashud Marjub Orabi, retired oil company worker, stands next to the grave of his son and other rebel fighters, who he says were killed in Tripoli fighting against Moammar Gadhafi's troops, at a cemetery on the first day of Eid al-Fitr in Tripoli, Libya, Wednesday, Aug. 31, 2011. Muslims are celebrating the festival of Eid al-Fitr which marks the end of the holy fasting month of Ramadan. (AP Photo/Alexandre Meneghini) (Alexandre Meneghini)
--

It's true that Moammar Gadhafi, like many -- perhaps a majority of -- rulers in his region, was a thug and a brute, if at times a comical figure. One doesn't need to be an apologist for him -- nor deny the satisfaction of seeing the citizenry joyously celebrating his ouster -- to demand some honesty about the motives behind his removal. Especially when it comes to our own government's role in funding it, and thus every American's unwitting participation.

A look at the events leading up to the "uprising" -- and a consideration of the historical background--suggests that the war was never about the stated humanitarian objectives. Rather, humanitarian appeals were used to mask less acceptable purposes -- a range of geopolitical motives shared by the leading NATO countries, that, as is so often the case with military action, is concerned principally with oil supplies and other strategic concerns.

A raw land grab is not politically correct in today's world, and so the American and European publics were presented with something far more palatable: a desire to do the right thing. This hoary story line worked with a complacent media, but it doesn't hold up well to scrutiny. Let's start with the official justification for NATO's launch of its bombing campaign -- for without that campaign, it's highly improbable the rebels could ever have toppled Gadhafi. We were told from the beginning that the major purpose of what was to be limited bombing -- indeed, its sole purpose -- was to protect those Libyan civilians rebelling against an oppressive regime from massive retaliation by Gadhafi. Perhaps because of NATO's initial intervention, the feared genocidal bloodletting never did occur. However, protecting civilians apparently didn't generate sufficient public support for intervention, so we started to hear about other purported reasons for it. Gadhafi was encouraging his soldiers to commit mass rape! And giving them Viagra! And condoms!

You can't make this sort of thing up. And yet that's just what the NATO crew did -- made it up. The media, always glad to have a "sexy" story, especially a sick sexy story, even a sick sexy story with no evidence to back it up, covered this ad nauseam, but never bothered to find out if it was true.

We've been expressing doubts about these claims (see this and this and this.) But it's tough to counterpoise hot-button issues with rationality. If you questioned the mass rape story, you were a "rape-enabler." If you pointed out that Gadhafi was being bombed for anything other than humanitarian reasons, you were a "Gadhafi-lover."

The media was so gullible that the professional disinformation guys went onto auto-pilot, recycling tired old tropes that nobody ought to be buying anymore. For example, most news outlets reported recently that Libya had fired a SCUD missile at the rebels.

"That it didn't hit anything or kill anyone is not the point. It's a weapon of mass destruction that Col. Gadhafi is willing to train on his own people," said one Western official.

If the effort to rally public opinion against Gadhafi centered on any one factor, it was fury over Libya's purported role in the 1988 bombing of Pan Am flight 103 over Lockerbie, Scotland. As we noted in a previous article, in the years since the conviction of a Libyan intelligence officer in the tragedy, a chorus of doubts has grown steadily. The doubt is based on new forensic evidence and research, plus subsequent claims by prosecution witnesses that their testimony was the result of threats, bribes, or other forms of coercion. It is an ugly and disturbing story, not well known to the larger news audience.

Yet Lockerbie has continued to touch nerves. In February, when Gadhafi's Justice Minister turned against him and became a rebel leader, he brought with him dynamite. Mustafa Mohamed Abud Al Jeleil made the dramatic claim that his ex-boss was the culprit behind the bombing of Pan Am 103. He asserted that he had proof of Gadhafi giving the direct order for the crime. This got considerable media attention, though almost no news organizations followed up or reported that Jeleil never did supply that proof. The Libyan convicted of the crime has consistently denied any involvement. Nonetheless, his conviction in the case has had Gadhafi on the defensive for years -- and working hard to prove to the West that he can be a "good citizen." Part of this has entailed his paying out huge sums in reparations.

From the beginning of the Libya saga in February until now, the NATO coalition has never wavered from its initial declaration of humanitarian motives. And, to be sure, we may still learn of horrible, previously-unknown atrocities by Gadhafi. Still, the United States and its allies have little history of using their might strictly to protect civilians. If so, millions of South Sudanese, Rwandans and others might not be in their graves.

Besides, with all the talk about Gadhafi harming his citizens, what about the effect of more than 7000 -- yes, seven thousand -- NATO bombing runs? We heard constant reports about how Gadhafi was facing charges of "war crimes," with never a word about NATO. To learn the impact of this massive unleashing, you had to be visiting little-known sources such as the Canadian website, Global Research, which often probes beyond official Western accounts of global interventions.

Some Western military officials couldn't even be bothered to participate in the "humanitarianism" charade. For example, the top British general explicitly stated that the objective was really to remove Gadhafi. Nobody -- including the media -- paid much attention to this admission, perhaps because it was already assumed to be the case.

Gadhafi should never be seen as a victim -- indeed, he has always been sleazy and monstrous in various ways. But the US and its allies appear to have cared little about this, while being deeply troubled by his role as a fly in the geopolitical ointment. A look at the long and complex historical relationship between Gadhafi and the West begins to explain the true reason he had to go. It also dovetails perfectly with a growing body of indications that Western elites encouraged and even provoked the uprising -- while tapping into deep discontent with the dictator.