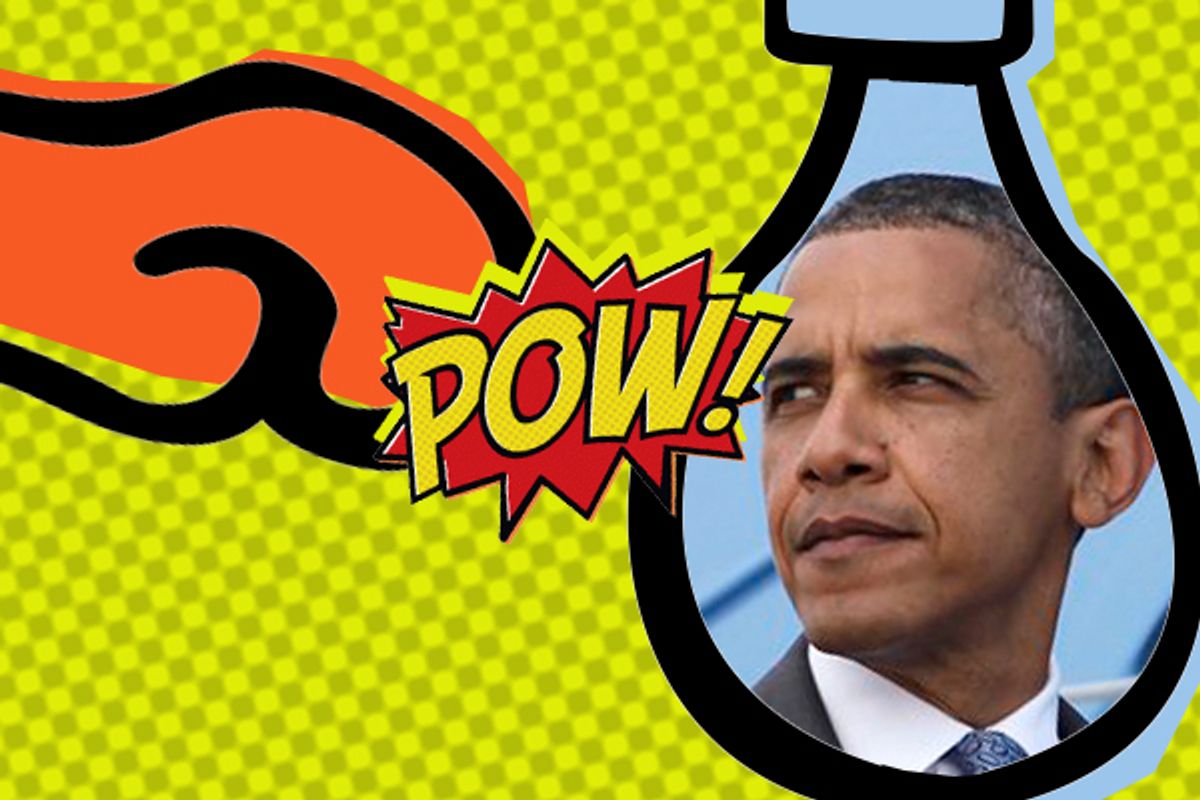 Politically speaking, the most telling moment of the Obama presidency may never actually have happened. The event either took place or didn't, during the phony "crisis" leading up to Congress' vote raising the National Debt limit.

Phony because to everybody in Washington intermittently in contact with the visible world, raising the debt limit was a foregone conclusion. To all but the hardy band of crackpots barnstorming for the GOP presidential nomination, risking a U.S. government default was unthinkable.

Democrats insisted that no personal confrontation took place, and that Obama remained gracious despite Cantor's acting like an annoying jerk. "The climax of the meeting was the president basically saying, 'What's happening in this room confirms what everybody across the country thinks about Washington, D.C.,'" one said. "Which is that people are more interested in protecting their base and political positioning than solving problems."

That's exactly what people think. Alas, either way, Obama loses. It's hard to say which version makes him look weaker: Cantor's tale of an angry president impersonating the worst poker player in Washington; or President Milquetoast, making nice with rivals whose goal is his destruction. Won't this guy fight for anything?

Yeah, yeah, I know. Navy SEALs under his leadership killed Osama bin Laden. Everybody involved praised Obama's calm determination. Libyan dictator Moammar Gadhafi got run out of Tripoli without a single American casualty. NATO allies Britain, France and the Netherlands carried most of the load.

This just in: Americans really don't care about Libya. Temporarily, at least, they've had it with military adventures in Asia and North Africa. Maybe they should care, but they don't.

Domestically, the White House has spent 2011 playing a weak hand badly. With regard to spending and the economy, everybody knew that Obama's bluff had been called long before Cantor's self-aggrandizing tale. The president has survived a series of Pyrrhic victories since a government shutdown was narrowly averted last spring, with Obama bragging about the biggest single-year spending reduction in American history.

Problem is, that's a competition no Democrat can win, and shouldn't try. Again in poker terms, the more reasonable Obama has tried to appear, the more Republicans have seen him and raised him.

He wants a friendly compromise? They're intent upon building a bridge to the 19th century. White House advisors portray the president as "the adult in the room." More often, he resembles the pigeon.

Case by case, however, it's hard to disagree with my former colleague Jonathan Alter, writing in the Washington Monthly. Substantively, Obama's doing reasonably well given the deep hole the Bush administration left for him. Recently, a fellow asked if I could honestly say we're better off now than when Obama took office.

"Yes," I answered. "GDP contracted 8.9 percent in the fourth quarter of 2008, 2.2 million jobs were lost; by January 2009 the economy was shedding jobs at a rate of 800,000 a month." I neglected to mention the $1.3 trillion budget deficit Bush left. My correspondent accused me of blaming Republicans, although the word didn't appear in his challenge or my response. Who should be blamed, Martians?

Alter argues that people (like me) were talking through their hats about Obama's power to resolve the debt ceiling debacle: "Invoking the 14th Amendment sounded satisfying, but a constitutional crisis layered on top of a debt-limit crisis would have been a fiasco."

True, a midsummer impeachment melodrama would have boosted CNN's ratings as much as Hurricane Irene without doing a damn thing for the economy. So it's possible to argue that Obama took yet another one for the team, negotiating the least bad outcome from extremists putting party above country.

Every poll, however, shows how badly the White House's rope-a-dope strategy has damaged Obama politically. Congressional Republicans have sunk in public esteem almost into single digits. Strong pluralities say the president needs to "stand up" to Tea Party fanaticism, which grows ever more unpopular.

People still like Obama personally. Sixty-three percent of voters in a recent Pew survey think he's well informed and cares about people like them; 59 percent find him trustworthy. But they also divide 49 percent to 47 percent about whether he's a strong leader at a time when the nation definitely needs one who can spell J-O-B-S.

The wonder is that anybody thinks so.