Libyan rebels round up black Africans 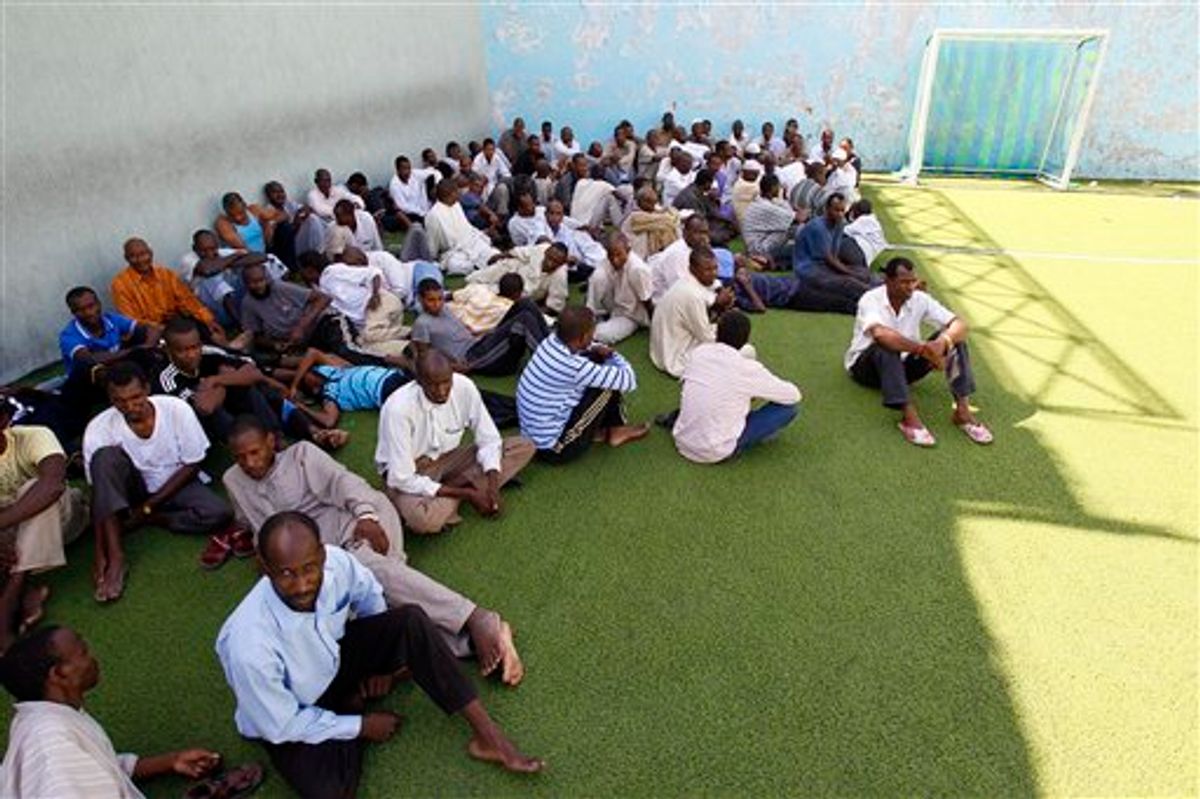 Men suspected of being mercenaries for Moammar Gadhafi, are held in a district sports center next to the medina, set up as provisory jail in Tripoli, Libya, Tuesday, Aug. 30, 2011. Libyan rebels are demanding that Algeria return Moammar Gadhafi's wife and three of his children for trial after they fled, raising tensions between the neighboring countries. Algeria's decision to host members of the Gadhafi clan is an "aggressive act against the Libyan people's wish," said Mahmoud Shammam, information minister in the rebels' interim government.(AP Photo/Francois Mori) (AP)
--

Rebel forces and armed civilians are rounding up thousands of black Libyans and migrants from sub-Sahara Africa, acccusing them of fighting for ousted strongman Moammar Gadhafi and holding them in makeshift jails across the capital.

Virtually all of the detainees say they are innocent migrant workers, and in most cases there is no evidence that they are lying. But that is not stopping the rebels from placing the men in facilities like the Gate of the Sea sports club, where about 200 detainees -- all black -- clustered on a soccer field this week, bunching against a high wall to avoid the scorching sun.

Handling the prisoners is one of the first major tests for the rebel leaders, who are scrambling to set up a government that they promise will respect human rights and international norms, unlike the dictatorship they overthrew.

The rebels' National Transitional Council has called on fighters not to abuse prisoners and says those accused of crimes will receive fair trials.There have been little credible evidence of rebels killing or systematically abusing captives during the six-month conflict. Still, the African Union and Amnesty International have protested the treatment of blacks inside Libya, saying there is a potential for serious abuse.

Aladdin Mabrouk, a spokesman for Tripoli's military council, said no one knows how many people have been detained in the city, but he guessed more than 5,000. While no central registry exists, he said neighborhood councils he knows have between 200 and 300 prisoners each. The city of 1.8 million has dozens of such groups.

"We are building a Libya of tolerance and freedom, not of revenge," he said.

Oil-rich but with a relatively small population of 6.6. million, Gadhafi's Libya welcomed hundreds of thousands of black Africans looking for work in recent decades. Many young citizens of Mali and Niger who flocked to Libya in the 1970s and 1980s were recruited into an "Islamic Legion" modeled on the French Foreign Legion. In addition, Gadhafi's military recruited heavily from black tribes in Libya's south

As a result, people with roots in sub-Saharan Africa and black Libyan citizens have been targeted by rebel forces in the messy and confusing fight for control of the country.

In the Khallat al-Firjan neighborhood in south Tripoli, Associated Press reporters saw rebel forces punching a dozen black men before determining they were innocent migrant workers and releasing them.

The Gate of the Sea club near Tripoli's fishing port became a lockup Monday night, when residents rounded up people in the surrounding area.

Guards at the club said they looked for unfamiliar faces, then asked for IDs. Those without papers or whose legal residences were distant cities were marched to the club.

This week, an armed guard stood by a short hallway that led through two metal gates onto a soccer field surrounded by high walls. There was no roof, so the detainees clustered against the wall to get out of the heat.

In an office nearby where sports trophies still lined the shelves, Ibrahim al-Rais, a 60-year-old fisherman, acted as prison director. A bag held wallets and IDs taken from the captives. Another was stuffed with cell phones, which occasionally rang.

He acknowledged that many of the detainees were likely innocent migrant workers stranded in the country but he insisted that a "big percentage" were mercenaries.

"These people were fighting against our people," he said.

As proof, his team pointed to ID cards issued in Libya's south that he said were fake and a document issued by the Niger Embassy in Tripoli. He said Gadhafi gave many mercenaries Libyan IDs so they could fight. He also said many had been carrying dollars or euros -- which al-Rais said were mercenary wages.

Sabri Taha, a fish merchant in short and flip-flops who was prisoners, said one had a video on his phone of a soldier shooting children. When asked by an AP reporter to play it, he couldn't find it. The prisoner said he didn't know how the video got on his phone.

In another man's wallet, Taha found a photo of the detainee in a green military uniform and accused him of fighting for Gadhafi. The detainee said he had manned a regime checkpoint, but had defected to the rebels when they reached the city.

The captors insist their prison is temporary and that the local military council will question the detainees before releasing them or transferring them elsewhere.

In the meantime, they started a handwritten list of the men's names, ages and nationalities.

"You see, we have no experience, but we have figured out how to get organized," said Abu-Bakir Zaroug, a local volunteer.

They still didn't know how many prisoners they held.

"The danger is that there is no oversight by any authorities, and the people who are carrying out the arrests -- more like abductions -- are not trained to respect human rights," said Diana Eltahawy of Amnesty International. "They are people who carry a lot of anger against people they believe committed atrocities."

For about a week, the Tripoli Local Prison has been receiving inmates and now holds about 300, said Anwar Bin Naji, a former prison employee who helps run the facility. About 50 are Libyans. The rest are from Ghana, Nigeria, Niger and other African countries.

"They are all arrested by rebels or by civilians who love the homeland," Naji said.

As he spoke, two rebel trucks carrying about a dozen black men entered the prison, honking their horns.

"Those are all mercenaries, or most of them," he said before speaking to the men.

In the cellblock, captives clustered by the barred doors of their cells. All said they were migrant workers who had come to Libya to work. Some said they'd lived here for years.

They said they hadn't been beaten, and were given simple food once or twice a day. They had drinking water, but none for bathing, they said.

Of the 28 people in one five-by-six meter cell, one had blistering burns on his face, neck and arm. Naji, the guard, said volunteers were still setting up a medical clinic.

The burned man, Ahmed Ali, said he'd come to Libya from his native Chad two years ago and worked as a house painter before the uprising.

"When the rebels entered Tripoli, some guys came and burned down my house," he said. He escaped and ran to some rebel fighters, hoping they'd protect him.

"They brought me here," he said, adding that he'd received no medical care in the six days since his arrest.

"They believe that most of the black in Libya are mercenaries, so now all the blacks on the street, they pick them up," he said.