Serge Gainsbourg, introduction to a provocateur

As a new Serge Gainsbourg biopic opens, members of Magnetic Fields, Yo La Tengo and more share their favorite songs 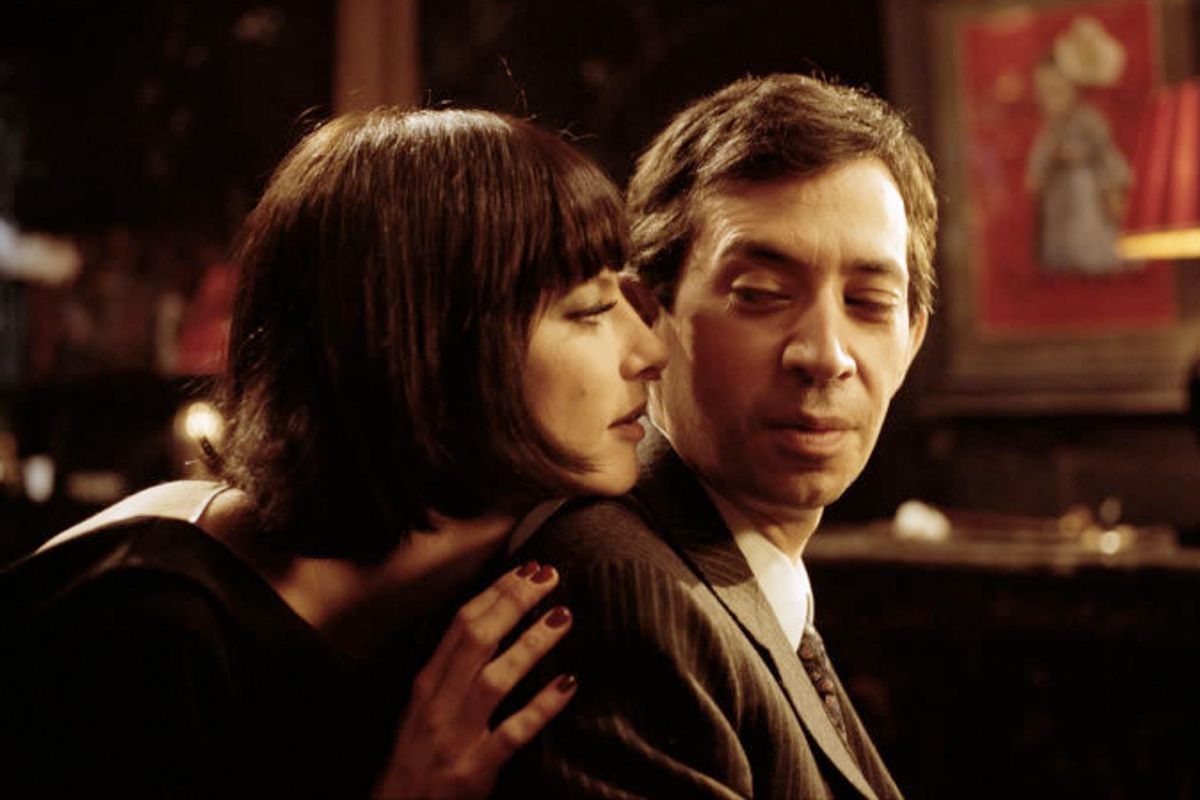 These days, we're more likely to be shocked by something a looney-tunes politician says than any rock-star activity, but when French composer Serge Gainsbourg (1928-1991) was around he was Monsieur Provocateur No. 1. Before famously smoking and drinking himself to death, he recorded “Lemon Incest” with his daughter Charlotte Gainsbourg (now a beautiful and talented actress, musician and style icon), accosted Whitney Houston on French TV  and became the idol of every British boy by landing '60s superfox Jane Birkin. This weekend, a biopic titled "Gainsbourg: A Heroic Life" will open in New York and L.A., before heading to a few other select cities. It chronicles the scandals, the famous duets with Birkin, Brigitte Bardot and France Gall and his command of so many musical genres.

We asked musicians influenced by Gainsbourg -- or just fans of his suave pop -- to share their favorite songs and possible entry points for new fans. "Melody Nelson" is a must in any discography. It is the biggest school for sound production and poetry. Beyond being an outstanding record with exceptional writings and composition, it is also the greatest sounding record. Everything one can learn about recording bass, drums, vocals and strings is perfected in this record. This record is heartbreaking on all terms. It is The Bible.

The first song that comes to my mind is "69 année érotique" because the words, the composition and the orchestration are all at their best. Herbie Flowers is on bass and he invents counterpoint lines like if they came from J.S. Bach’s left hand. Arthur Greenslade arranges wonderfully, though I think a lot of its charm comes from the fact that it doesn’t sound at all like British bands at that time, like Soft Machine or Pink Floyd. It is swinging London seen and idealized by a "variety" Frenchman, so there’s a blend of opportunism and naiveness that makes the result unique. My favorite songs: "Weekend En Mer" -- This is one of the songs he wrote for Juliette Greco in the early days. It has a certain feeling, which perhaps she brought to it, of a happy otherworldly nostalgia -- an entire film (or at least an entire watercolor) is caught somewhere between the lyric and the melody.

"La Javanaise": This is another written for Greco. Her version is wonderful, as is Jane Birkin’s, but I love his own the very best. [My band] used to sing it in English and I always found it very moving, particularly that line "We were in love, right ’til the end of that song."

"Lemon Incest": I really like the version Mick Harvey and Anita Lane did in translation, but the original with Charlotte is wonkily special. You probably wouldn't be allowed to sing a song like this now -- and maybe never would have been able to in England. It's funny and tender and yes, slightly seedy, but caught something subtle, true and poignant about a father-daughter relationship.

And two instrumentals: "Solitude," from the film "Strip Tease," is a gorgeous, evocative piano piece showing his love of Chopin. As well as all the incredible songs, he wrote so much amazing instrumental film music.

"Scene de Bal 1": From the film "Les Coeurs Verts," this is the original instrumental that became "Je T'aime Moi non plus." An easy-listening, lovely lounge classic that is easier to DJ than the later version, as that one still makes the English blush. Gorgeous.

The Real Tuesday Weld’s "The Last Werewolf," a soundtrack to Glen Duncan's novel of the same name, is out now. My favorite Serge Gainsbourg song is "Couleur Cafe." I love the way Serge’s deep voice alternates with the female voices floating over the spare percussion. The production of that song is so fresh and cool. In fact, when Pink Martini recorded the song "Dansez-Vous," we copied that production in reverse, with male voices backing me up. I'm a fan of "L’Anamour," which I first heard performed by the amazing Françoise Hardy. I still prefer her version, though Gainsbourg’s features an unbeatable organ sound and, of course, the voice. The song is classic, catchy, and features a simple, evocative sketch as a chorus:

The title is not quite translatable, sort of "one of those without love" or "someone who is anti-love." The mutability of the (invented) word is perfect.

This is probably going to sound obvious but I absolutely adore "Je T’aime, Moi Non Plus." It had a huge effect on me as a growing lad -- for, ahem, obvious reasons -- and I think the fact that it was actually banned by the BBC at the time made it all the more thrilling for me. I suppose the lyrics could be best described as "abstract," if you were feeling kind ... but as my knowledge of French is rudimentary, that has never really bothered me. It’s kind of obvious what the song’s about, anyway! Apart from being a fine tune, I love the arrangement and the sound of the organ and bass guitar. I prefer the Jane Birkin version to the original Brigitte Bardot version because the strings have more of an enhancing role in the remake, but I do favor Bardot’s vocal over the higher-pitched singing by Birkin. Anyway, this particular song introduced me to the genius that was Serge Gainsbourg and together with John Barry and Ennio Morricone, he would become a great influence on Cinerama.

Hamish Kilgour, the Clean and the Mad Scene

I love his songs, arrangements, production and the atmosphere evoked: "Initials BB," "Bonnie and Clyde," "Harley Davidson." It’s his '60s stuff that gets me and his collaborations with Bardot and France Gall. The space and little hooks in the production -- instruments doing the right thing in the right place -- topped off with cool vocals. Maybe for me it's a pop benchmark by which to measure everything against. I never tire of hearing his songs. He always looked good -- dissolute, slightly disheveled and puffing on cigarettes -- always hanging out with the female icons of the time. He also didn't seem to care what people thought of him and was pushing against prudes and repression in French culture.

"Ballade de Melody Nelson": There’s almost nothing to it. Barely there drums panned left; muted fingerpicked guitar panned right; right up the middle is God’s personal, unobtainable bass tone. Jean-Claude Vannier’s truly psychedelic, minimal string arrangements flit around the foundation like fireflies in a pitch-black room. Just above the music -- or from within it, perhaps telepathically -- Serge and Jane narrate this waking fever dream. One minute, 55 seconds. Holy fuck.

I love the song "Les Sucettes" sung by France Gall, but was just as shocked by the double meaning as Ms. Gall supposedly was when she found out. I also love "Comment te dire adieu" sung by the great Françoise Hardy. An old friend put it on a mixtape for me years ago, and I felt like my world immediately opened up. I don't know much about his personal life, but he obviously chose the coolest women ever to collaborate with.

Stephin Merritt's "Obscurities" is out now.

A filthy mind, a rascal heart, France’s Dylan and a genius musician to boot. "Ballade de Melody Nelson" was a game-changer for me. To this day I hear something new every time I listen to it and it never fails to give me goosebumps and make my heart wrench just a little. If Serge were alive today I fear would have to put him over my knee and tell him what a very naughty boy he has been for not doing a duet with me yet.

Make it pleasant to the eyes and ears and butter and pepper it with sex. Then, show up disheveled, half in the bag and sing of things like cradle-robbing, deceit and murder. The complacent, the asleep, might feel something through this variance. Maybe. They might even stir for a moment and question. Doubtful, but worth a try. Why do we still celebrate Baudelaire, Jarry, Rimbaud, Artaud, Lautréamont, Breton? Are these really just conversation pieces? Art gallery and library items? Put on "Rock Around the Bunker," pour a drink, light a Gauloise and talk about it loudly with your neighbors. While they are asleep!

The Fan Modine’s "Gratitude for the Shipper" is out now.

From Paris With Love Music