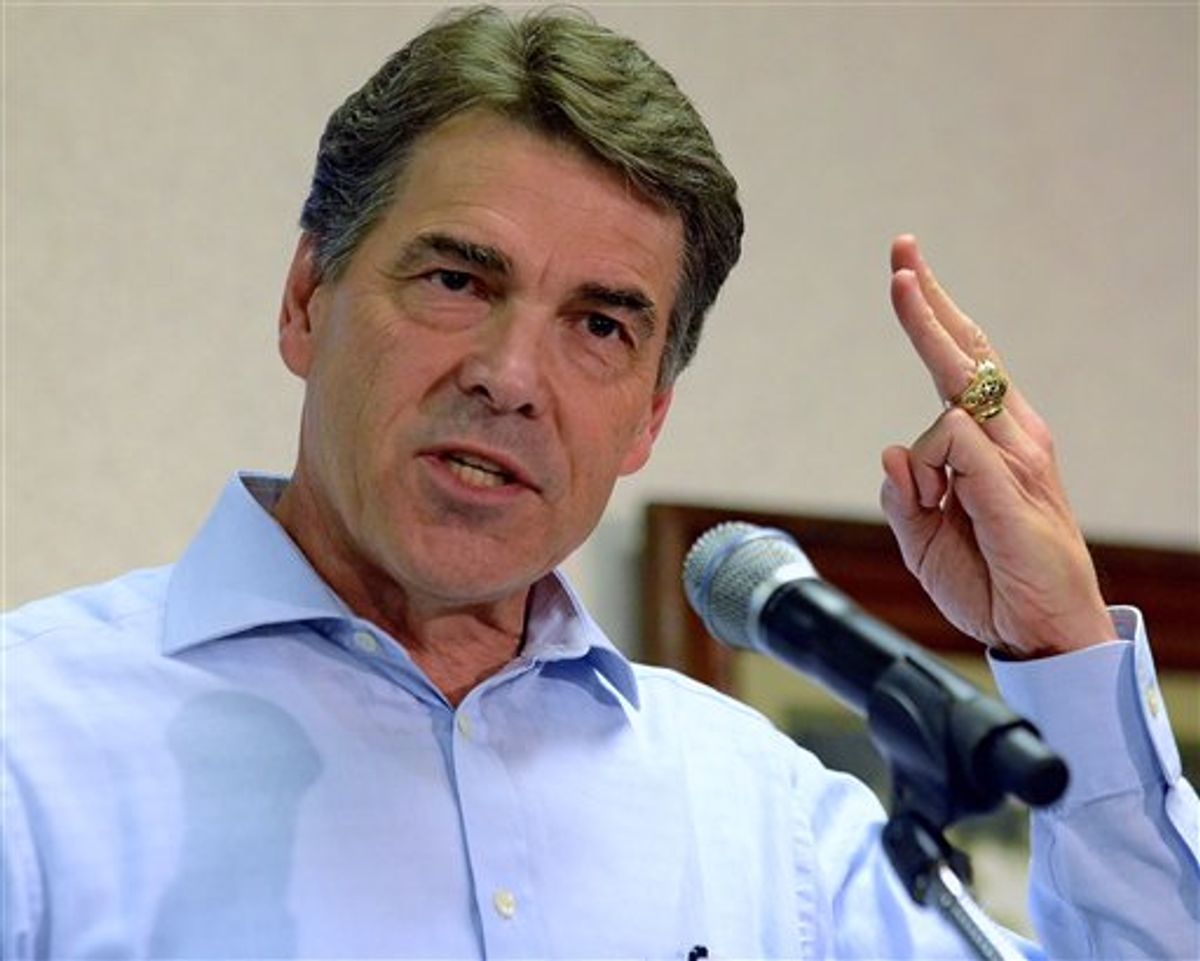 FILE - In this Aug. 20, 2011, file photo, Republican presidential candidate Texas Gov. Rick Perry speaks to supporters at Tommy's Ham House in Greenville, S.C. A new Associated Press-GfK poll finds that Republicans are growing more satisfied with their choices for president. And so far they like what theyre hearing from Perry. (AP Photo/Richard Shiro, File) (AP)
--

Rick Perry has executed 235 people so far as governor of Texas, so it's no surprise that he's set to kill at least one more person as a presidential candidate. Unlike the case of Cameron Todd Willingham, whose execution was carried out despite widespread doubts as to his guilt, Duane Edward Buck committed the murders he's been convicted of. But Mother Jones reports that Buck's sentence was obtained through questionable means.

Prosecutors firmly established Buck's guilt, but to secure a capital punishment conviction in Texas they needed to prove "future dangerousness"—that is, provide compelling evidence that Buck posed a serious threat to society if he were ever to walk free. They did so in part with the testimony of a psychologist, Dr. Walter Quijano, who testified that Buck's race (he's African-American) made him more likely to commit crimes in the future. (Quijano answered in the affirmative to the question of whether "the race factor, [being] black, increases the future dangerousness for various complicated reasons.")

So Buck is being executed because he's black. This is a bit problematic, constitutionally.

MoJo writes that this psychologist gave race-based testimony in six other death penalty cases, leading John Cornyn -- then the Texas attorney general -- to ask for each case to be retried. And all the cases were retried, with this one exception. And this exception is due to be executed in two weeks.

As we have seen, killing lots and lots of people is one of the things about Rick Perry that Republican voters love, so I can't imagine he'll grant clemency or even delay the sentence.

Oh there's also another probably innocent person that Texas is set to kill soon. Larry Swearingen was convicted of killing Melissa Trotter based solely on circumstantial evidence. He was jailed weeks before Trotter's body was found. According to multiple pathologists and doctors who've reexamined the evidence, Trotter was killed while Swearingen was in jail. (One court of appeals judge rejected the science-based testimony of medical examiners because it doesn't explain what the victim was doing for those weeks she was missing. That's not where I thought the burden of proof was supposed to lay, but what do I know.) This execution has been stayed, for now.