U.S. troops "executed" five children and five other civilians in Iraq in 2006, a new cable reports 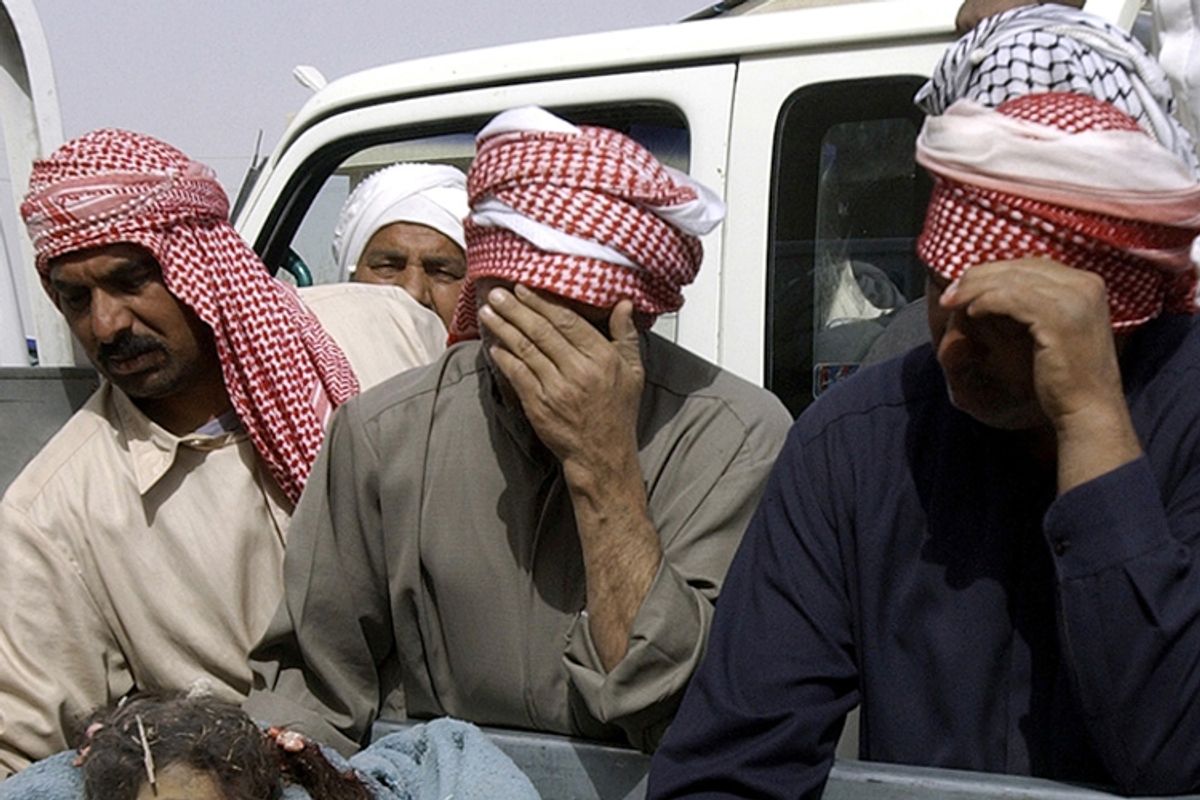 Relatives mourn near the bodies of children, reportedly killed in a March 15, 2006 U.S. raid in the village of Ishaqi.
--

This week, a State Department cable released by WikiLeaks brought renewed attention to a disputed killing of several civilians in the Iraqi town of Ishaqi on March 15, 2006.

The cable contains a copy of a letter of inquiry by a U.N. investigator outlining allegations that U.S. forces had handcuffed and then "executed" 10 people in the home of Faiz Harrat Al-Majma'ee. The soldiers then called in an airstrike that destroyed the house, it alleges.

The U.S. military has maintained that nothing improper happened, but to this day has refused to comment in detail about the case.

Beyond the primary question about what happened that day and whether it was an unjustified massacre or a case of collateral damage, the incident has political ramifications. As the AP reported Friday, Iraqi politicians said this week the incident could have an impact on any agreement to allow U.S. forces to stay in the country beyond Dec. 31.

As the AP noted, "Whether U.S. forces in Iraq will continue to have legal immunity from prosecution if they stay is one of the major stumbling blocks in the ongoing negotiations, as Washington will not allow the military to remain without it."

A Pentagon spokesman said this week, "We've already investigated these allegations, and there is no new information."

To learn more, I spoke to journalist Matthew Schofield, who has been covering the incident since he first wrote about while on assignment in Iraq in 2006. He is currently an editorial writer at the Kansas City Star, a McClatchy paper, but he wrote a news article on the WikiLeaks cable this week.

I know there are competing accounts, so can you explain what do we know -- or think -- happened in this incident in 2006?

What we know happened -- what everyone agrees on -- is that U.S. troops went to a house in Ishaqi, Iraq, in March of 2006. In one official U.S. version, the troops were looking for an al-Qaida-affiliated terrorist, or, in another official account, someone who had shot at U.S troops. When they approached the house in the early morning hours, there was a gunfight. Neighbors talked about this. In the U.S. version, in the course of the gunfight, the people in the house were killed, the house was destroyed at the same time, and they were able to detain the person they were looking for. In the account the neighbors told, as well as the report of a U.N. investigation on this, the house was standing when the soldiers went inside and was destroyed sometime later.

The bodies of the dead were found against one wall in one room, all handcuffed in white plastic handcuffs according to neighbors. The coroner we talked to after the incident said that the people who died were killed by gunshots to the upper chest and head. It didn't necessarily look execution-style -- the shots were not all to the same place in the head, or anything like that -- but it looked like they were from fairly close range. His guess was that the bullets were from an M-16. The Iraqi police investigators, who had been trained by U.S. forces, said in their report that these had been execution-style killings by American forces.

Who was killed exactly?

There were five children under the age of five, the youngest being five months old. Then there was a mother, her sister, the grandmother and a visitor -- four women in all. The father, in his 20s, was killed as well.

What about the question of an alleged airstrike on the house?

The house was certainly rubble after the raid -- that's clear. When it collapsed is the question. The neighbors said that after the U.S. troops left, an airstrike was called in. At the time, they said it was helicopters. U.S. forces maintained that it collapsed during the firefight. I couldn't get to the site when I was in Iraq because at that time we couldn't get far out of Baghdad very safely. We relied on a stringer who we had worked with quite a bit in the past. He took a satellite phone and we did phone interviews with the coroner and the police and others.

What has the military said about the incident over the years?

The initial reaction was always that "this can't be true." In June 2006, the U.S. military finally said that nothing untoward had happened in Ishaqi. But there were questions about the military investigation. They weren't on the ground for a particularly long time. Again, we were not there when the investigation took place, but neighbors told us afterwards that investigators were on the scene for a total of 30 to 45 minutes. The military maintained that it had been thorough. Some Iraqi government officials have long maintained anger over the incident.

How did you end up covering the incident?

It was an almost insanely violent period. So we were trying to do some in-depth coverage of what was going on, a sort of day-in-the-life piece, instead of just letting the violence roll. On the day we had settled on this idea, news of the Ishaqi incident was released. We got a press release from the U.S. military that talked about five people who had been killed in collateral damage. So we started looking into it. After our stringer talked to the neighbors, he told us, 'Look, the version I'm getting doesn't jibe with the version you're getting from the military.' He said it's not five people, it's at least 10. After I went to the military with this, they then came back and acknowledged the higher body count was accurate.

What did we learn from the cable just released by WikiLeaks?

One, it shows different sources of information than what I was dealing with. It shows that officialdom was concerned about this. They were not admitting they were concerned when we were on the story back then. They gave much more credence to the story than they had suggested to the press at the time. Behind the scenes, there was a great deal of concern over what exactly had happened there.

The cable outlines pretty much exactly what the worst-case scenario was when we were reporting on it. I didn't really pursue the worse-cast scenario because I didn't believe it was possible. We looked into it and we reported on the allegations at the time, but we were always looking for other explanations, for other ways this could have happened. This cable seems focused on that worst-case scenario, which I found fascinating.

So what happened with the U.N. investigation? It was essentially stymied?

Yes, it died. They sent questions out to the United States, and there was no response. They have said there was frequently no response from the United States on these matters. They sent questions to the Iraqi government, and they said these things also just tended to vanish because Iraq was a mess at the time. The investigator, Philip Alston, who is the U.N.'s special rapporteur on extrajudicial, summary or arbitrary executions, told us this week that they just had nowhere left to go after these nonresponses.

So this incident has really never been addressed by the U.S. military in a comprehensive way?

It has not. The military has always been dismissive of this case. It may well be that it should be dismissed. But there's enough smoke there that it deserves a very thorough investigation. These are very disturbing allegations. The Iraqi cops who investigated this had U.S. training; they were not anti-American. They had respect for the training they had gotten. There has been and continues to be a desire for concrete answers.