The "Saturday Night Live" of the West Bank 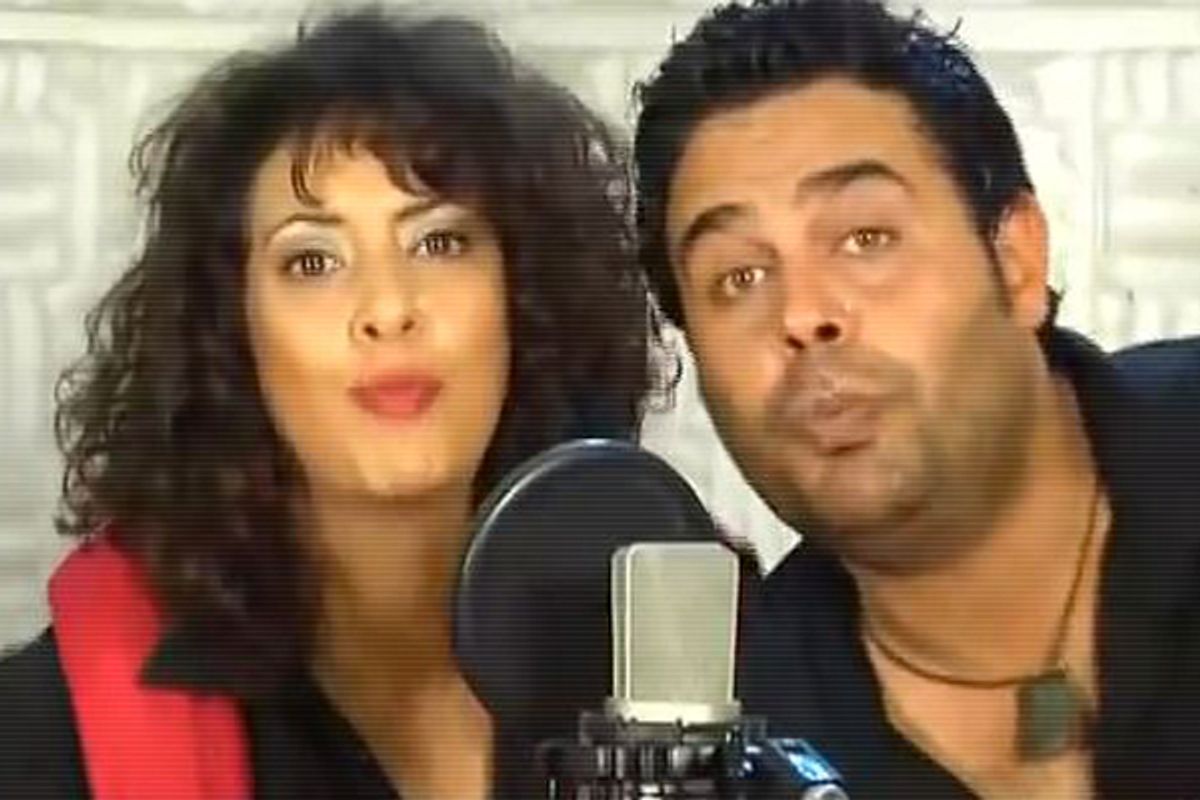 The hit Palestinian TV satire show "Watan ala Watar" began its Aug. 14 episode with a sketch featuring Palestinian Attorney General Ahmad Mughani getting besieged by Palestinians filing lawsuits over "Watan ala Watar" making fun of them. One woman says in Arabic that the TV show hadn't parodied her yet, but she's sure it's going to, so she wants to file suit preemptively. In the middle of the commotion, the frazzled Mughani, played by "Watan ala Watar" co-creator Imad Farajin, gets a phone call: "Watan ala Watar," it turns out, just made fun of him, too.

The sketch ends by showing Farajin and his "Watan ala Watar" colleagues one year later, silently clowning around, suggesting that even if Mughani and his government cohorts muzzle them, that won't stop the comedy crew's high jinks.

Those high jinks have been a runaway success since "Watan ala Watar," aka "Homeland on a String," hit the airwaves in 2009, the first political satire show ever broadcast on Palestinian TV. The weekly 15-minute show's three creators became local celebrities in the West Bank capitol of Ramallah, where they live and work, and episodes became a must-watch phenomenon, especially during Ramadan, when the show ratchets up to a nightly schedule. The holy month is akin to a U.S. "sweeps" period, with everybody at home by the TV. Last year, a local polling organization found that 60 percent of those in the West Bank and Gaza who'd seen "Watan ala Watar" actively approved of it -- far higher approval ratings than those of either Fatah or Hamas, the two major political parties.

From the start, the show enjoyed a surprising amount of editorial freedom, considering that it aired on state-run television in the Middle East. "We told officials there would be one condition: no censorship," says the show's 30-something co-creator Manal Awad, who dresses in stylish, modern clothes and speaks English with a heavy British accent, courtesy of her time in London where she got a master's degree in theater directing.

Palestinian officialdom agreed, allowing the show to air a sketch in which progress on an Israeli peace deal is announced by Fatah leader and Palestinian Authority President Mahmoud Abbas -- that is, Mahmoud Abbas the 13th, at a time 500 years in the future. Hamas, the Islamist party governing the Gaza Strip, received its share of knocks, too. One skit featured an Islamist judge making eyes at a male courtroom reporter. While Hamas' Ministry of Information has called "Watan ala Watar" "an example of black propaganda," the show has long enjoyed the blessing of the Palestinian Authority. Yasser Abed Rabbo, one of President Abbas' closest advisors and head of Palestine TV, even played himself on the show.

Most promising of all, during this year's Ramadan, "Watan ala Watar" had competition: "EscotChat," a new sketch comedy show that aired 20 minutes later. "Five years from now, you will find comedy clubs and comedy series here, and not just 'EscotChat' and 'Watan ala Watar,'"says Ihab Al-Jarere, "EscotChat's" creator.

"Watan ala Watar," it seemed, was helping Palestinians ascend the Middle Eastern comedy ladder, the unofficial scale in which Egyptians are considered to be the funniest of the funny and the Jordanians the exact opposite. (As one Palestinian joke goes, "Have you heard the one about the Jordanian businessman? Every morning before work he puts on his shirt, tie and angry face.")

But then, two days after "Watan ala Watar's" skit about the attorney general sketch aired, Palestine dropped a few comedy rungs closer to Jordan. Mughani, in a move reminiscent of the skit itself, pulled the show off the air.

It had told one controversial joke too many -- and Mughani and his cronies weren't the only ones not laughing. Recently, the show had diversified its subject matter, turning its satirical gaze upon Palestinian society itself. "We criticize all the governments, Hamas and Fatah, but they haven't changed since we started,"says Awad. "We needed new figures to criticize.”

That's why in one recent sketch, the show took on the local medical industry's outdated practice of settling malpractice issues outside of court with informal payoffs, depicting a doctor and a grieving mother bargaining over a dead baby as if haggling over prices at the market. Another episode satirized the shabbiness of Palestinian Authority police. In the skit, officers on the lookout for drunk drivers couldn't afford breathalyzers, so they're forced to smell the scofflaws' breath -- and get drunk themselves off the fumes.

Those jokes didn't go over so well. While local politicians had been fair game (maybe because in territories still controlled by Israel, the Palestinian Authority doesn't have much authority at all), the Palestinian elite apparently was not. The local police and the physicians' union filed grievances, and "Watan ala Watar's" creators say that for the first time ever, officials censored them. Meanwhile, newspaper opinion pieces called the show a disgrace, and somebody hacked the TV show's Facebook page, causing it to lose 40,000-plus fans.

Then, on Aug. 16, the attorney general, noting the complaints, pulled the plug. "Watan ala Watar" hasn't been on since, with "EscotChat" moving into its time slot. "I thought this season was going to be a really, really huge success," sighs Awad between puffs of an ever-present cigarette. "I didn't expect this really aggressive reaction against us."

This wasn't the only recent aggressive reaction to artistic rabble rousing in Palestine. In April, a masked gunman shot and killed Juliano Mer-Khamis, founder of the Freedom Theatre in the Jenin refugee camp in the northern West Bank, a murder that's still unsolved. While Palestinians mourned his death as a national tragedy, some weren't surprised: Mer-Khamis was a half-Jewish artist and activist who was always pushing the cultural envelope, staging versions of Animal Farm that featured boys and girls onstage together, wearing pig masks and criticizing the revolution. As Awad says of Mer-Khamis' murder, "You can't force new thoughts on people. Bit by bit, you have to work with them." Maybe Awad and her colleagues had been guilty of the same mistake.

Do such developments suggest the people here aren't yet ready to laugh at themselves? Is comedy in Palestine as stagnant as the peace process?

Far from it, in fact. There has always been humor in Palestine," says Sharif Kanaana, a Palestinian folklore professor who's been collecting local jokes since 1989, from the jubilant highs of the two intifadas (where many zingers involved street kids getting the better of Israeli soldiers) to the disillusioned lows in between. (A typical post-intifada joke goes, "Several heads of state meet with God and make requests for their people. To each, God says, "Not in your lifetime." Then Yasser Arafat asks for his people's freedom and God says, "Not in my lifetime.") "It's not just fun and entertainment,"says Kanaana. "It is a pan-human way of people expressing themselves.”

And in a place defined by absurdity -- where the beach is a few miles away but people in the West Bank have to hopscotch though Jordan and Cyprus to get there -- if Palestinians aren't allowed to express themselves through laughter, what else do they have left?

Many officials agree with them. "This decision of the attorney general is bad news and, in my opinion, is wrong," says Palestinian Authority spokesman Ghassan Khatib. "I think I speak for Prime Minister Salam Fayyad as well." Politicians such as Fayyad are savvy enough to know that in a period where Middle Eastern dictators are falling left and right, now is not the time to crack down on free speech.

While "Watan ala Watar's" shutdown could be bad news for the Palestinian Authority, it could end up being good news for the comedians behind the show. Headline-grabbing controversies, after all, are a comedian's bread and butter. Awad hints that Watan ala Watar is already fielding offers from other media outlets, and the hubbub may even score the show attention in Israel. "I haven't heard of them, but it's a shame that they were shut down," says David Kilimnick, an Israeli comic who owns the Off the Wall Comedy Basement club in Jerusalem. "I wouldn't be against giving them a stage here.”

In the meantime, Palestinians can catch a glimpse of "Watan ala Watar" at the three comedians' weekly live show at an upscale open-air restaurant in Ramallah. Two days after being pulled off the air, the trio took the stage there armed with timely material. As television news cameras rolled, the three apologized for being late. They said they had been detained at Attorney General Mughani's house. "Watan ala Watar" may be muzzled by the authorities, but that's not going to stop them from clowning around.

Joel Warner, who blogs for Wired.com and Psychology Today, is co-authoring a book about traveling around the world with a humor professor in search of what makes things funny. Find out more at Humorcode.com and on Twitter @HumorCode.

Joel Warner, who blogs for Wired.com and Psychology Today, is co-authoring a book about traveling around the world with a humor professor in search of what makes things funny. Find out more at Humorcode.com and on Twitter @HumorCode