He walked into the bank and placed a bomb on my desk. I can never forget what happened next 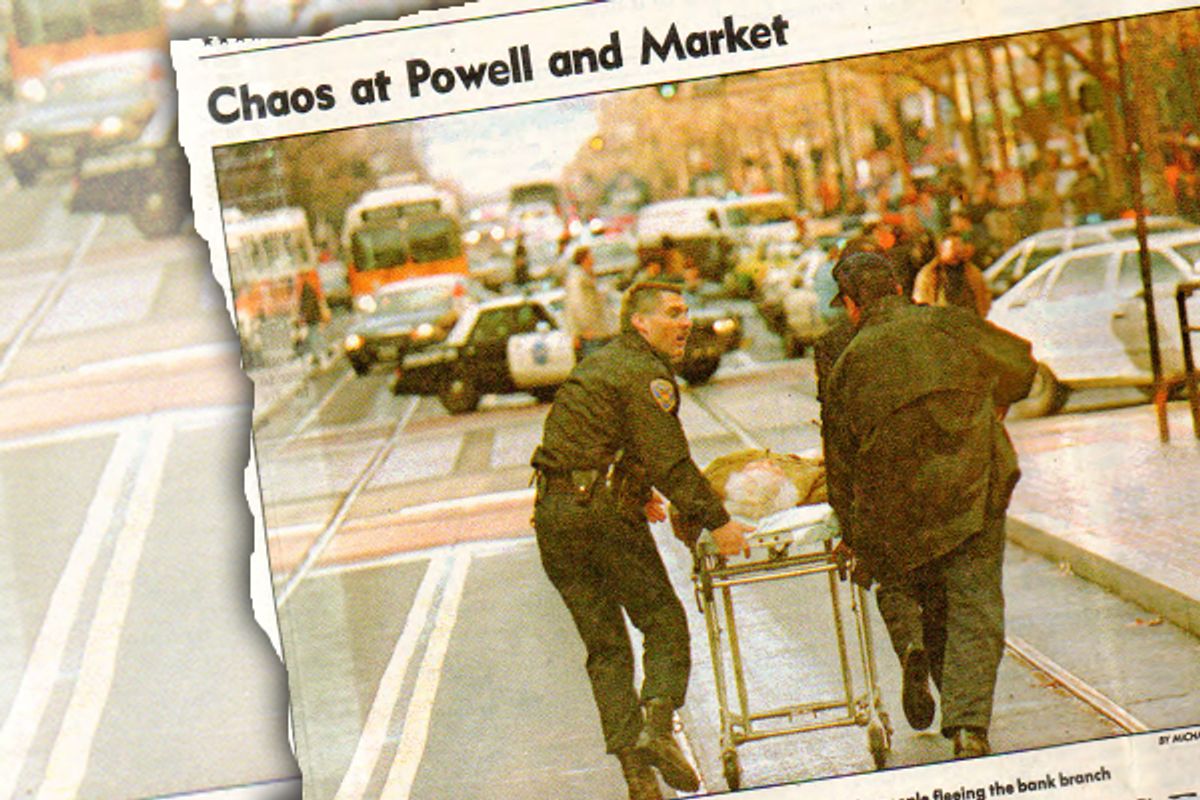 The front page of the San Francisco Chronicle on Dec. 7, 1994, featured the drama at the Powell and Market street branch of Bank of America the day before.
--

Tuesday, Dec. 6, 1994, began as a day like any other at the San Francisco bank where I worked as a financial services representative. At 9 a.m. on the dot, security guards unlocked the bank's massive steel doors, granting the flood of customers access to the colossal, marble lobby. Among them was Amanuel Abraha, a strange man who wasn't a stranger to me. Just two weeks prior, I'd opened checking and savings accounts for him. He had a pudgy build and skin the tone of honey. He was slovenly and solemn, qualities that could be off-putting to some, but it elicited only empathy from me. He'd often sidle up to my mahogany desk, requesting I check his account balance, and every time, I would oblige -- although I knew the amount hadn't changed much, if at all, from the previous time I'd checked. I suspected he had more than banking on his mind. But I just thought he wanted someone to listen to him, so I did. I had no idea this extra attention might save my life that day.

Shortly after sitting down, Amanuel ripped opened his bulky nylon coat, exposing a tangled web of wires, accented with two hand grenades that clung to his torso like pendulums frozen on their upswing.

"Who's in charge here?" he quietly demanded. His eyes were piercing in a way I will never forget. They became more menacing as he leaned in toward me. I felt so alone at that moment. I couldn't comprehend why no one around me seemed to notice the insanity that had just reared its head.

Amanuel had strewn several shopping bags on the patch of carpet in front of my desk. But then he reached into one, a red bag from Macy's, and pulled out a polyester Santa hat, the kind you get at Walgreen's for cheap. He tossed it onto my desk, and it landed with a heavy thud before nearly knocking over my nameplate. I could see something metallic sticking out from under its white brim. I felt like I was on an airplane I had just discovered was about to crash.

The front-page story in the San Francisco Chronicle that appeared the next day never mentioned that Amanuel was Muslim or referred to him as a suicide bomber. Today, the same story would undoubtedly include those descriptors. Acts of senseless violence seem to always have a "war on terror" angle now. Regardless of how the incident was reported, one thing is unfortunately certain: I know what it's like to be terrorized.

I was sweating, yet had never felt so cold in my life. I could barely remember the name of my colleague one desk over.

"Uh ... Jo .. uh ... Jollin," I forced myself to say, trying desperately not to stammer, but at the same time hoping she could read the panic on my face. "Would you mind asking Bill to come over here right away? My customer has an extremely urgent matter."   "Oh, sure, Paul. Gimme a sec," she replied, clearly not detecting anything amiss. As I waited the few minutes for Bill, the branch manager, to arrive, I felt like I was being suffocated.

"Don't worry, I'm not going to hurt you," Amanuel said, flashing an expression I could only interpret as schizophrenic madness. "This is going to be one big party. Everyone can have whatever they want to eat or drink!"

He unloaded the contents from the rest of his shabby shopping bags: Monstrous bottles of Jose Cuervo tequila; enough candy canes to treat an entire grade school; stuffed animals all scattered on my desk. Rotten fruit came next, and then a goldleaf-embossed, leather-bound edition of the Quran.

I've always been fidgety, unable to keep still. This is what paralysis must feel like, I thought, except that I could feel that the back of my turtleneck sweater was drenched with perspiration. When you think you're about to die, you soak up every detail. The world slowed down, and I couldn't look away from my captor's eyes. They were a soft brown shade, like caramel, with a pensiveness that was pure torture to me. He began mumbling something I couldn't understand. Tears moistened his cheeks. He picked up the sacred book and extracted a wallet-size snapshot tucked inside. The murky-gray backdrop hinted that the photo was taken at a chain portrait studio. A plain-Jane white woman with blond hair and a lace-collared chenille sweater hugged the waist of a little boy (maybe 3 years old?) with a precocious smile. He had perfectly tousled, butterscotch curls and lightly honey-hued skin.

I didn't need Amanuel to tell me the boy was his son; the resemblance was striking. Why wasn't he in the photo? I wondered, as he cradled it in his left palm, as if it had cast a spell on him.

You might be thinking that this would only happen on "Law & Order." I thought that myself pretty much throughout the entire ordeal. It was my cameo role: the hapless victim who would die five minutes into the episode. All I can say is that the drama, the suspense, the perp who had completely lost his mind -- it was all there, staring me in the face.

"Paul, what I can do for ya?" Bill asked, interrupting us. Amanuel's eyes hardened, like a watchdog startled by a stranger. Bill's trademark confidence disappeared as he took in the same grenades-and-wire peep show I was treated to just moments ago.

"So you're in charge?" Amanuel asked sarcastically. "Wrong!"

Bill and I turned into impromptu negotiators. We remained motionless, powerless, wondering how to proceed without setting off this ticking time bomb. The lobby was abuzz with customers, but crying out for help wasn't an option. We figured we'd be blown to smithereens if we did, along with the entire building and customers who had walked unwittingly into a minefield. John, another bank officer, happened to be sauntering by, a good 10 feet away but still within earshot.

"Uh, John, could you please cancel my meeting with Rosenberg?" Bill asked.

The request was code for an emergency situation. John's eyes widened, only for a split second, and he responded with the ease of a theater actor. "Will do, Bill!"

I waited for Amanuel to catch on, to stop John, who was now calmly approaching the bank's main entrance to flag down the street cops who often hovered outside. I wondered anxiously what would happen next. I was now hostage to my imagination (stupid imagination!) I pictured Amanuel firing at John's back, a single bullet ripping through his crisp Brooks Brothers shirt and exploding his heart.

Amanuel didn't even have a gun, but kept his eyes locked on Bill and me. With his back turned to the lobby, he hadn't a clue of the "undercover" transaction. All I could think about was those grenades I'd seen in too many high-adrenaline action flicks. I saw myself being blown to bits, a part of my ribcage landing on a teller window, thatches of my dark hair blown across the marble floor, my blood splattered like a Pollock painting on the window behind my desk.

Three police officers in SWAT gear entered the bank, arms extended, guns cocked. Amanuel swung around as they yelled, in unison, "Freeze, hold it right there! It isn't worth it!"

Their guns were aimed at Amanuel, but I sat in the line of fire. Amanuel sprung up and snatched me by my jacket's collar, in what would become a failed attempt to secure me as a human shield. Miraculously, he tripped while trying to drag me down with him to take cover behind the desk, and I scurried away on all fours.   I had no idea what happened to Bill, John or Jollin at that point. I had one focus and one focus only: to get the hell out of there. I crawled toward the exit and sprinted several blocks up Powell Street, a free flow of sweat, tears and snot streaming down my face. I stopped to catch my breath, marveling at how everyone around me dared to go about their business as usual. I wanted to cry out, to warn them that the bank was about to explode, that I needed to help my co-workers and customers out of there. Nothing came out but gasps of air.

I had run maybe 10 blocks. As I caught my breath, I began heading back, cautiously. Growing closer, I could see a few colleagues had exited and stood near the entrance. Their bewildered eyes searched me for answers upon my arrival. Before I could utter a word, there was a cacophony of gunfire coming from the bank. It was a loud pop-popping sound -- not what I expected, more like firecrackers during the Chinese New Year Parade. I thought about the bank's employees still inside -- many of whom I'd casually chatted with not even two hours earlier. Then as quickly as it came, the gunfire ceased, an eerie silence signaling to me that the standoff was over.   It turns out that all of them, as well as that morning's customers, had escaped unharmed -- at least physically. Two tellers were holding each other, crying hysterically, when police conducted a thorough search of the bank and discovered them in a coat closet. They had been hiding there during the entire exchange of gunfire.

Hours later, a detective escorted me to the crime scene to answer questions. My workspace was unrecognizable: The computer monitor shattered, the desk splintered by gunfire. The large plant next to my filing cabinet looked as if someone had slivered its long tapered leaves with a straight razor. A patch of blood-soaked carpet marked the spot from which I'd managed to escape.

I eventually learned what happened after I fled: Amanuel used my desk as a wall between him and the officers. He hurled one of the grenades at them, and they retaliated with bullets -- lots of bullets -- killing him instantly. The grenades turned out to be nonlethal World War II replicas. The Santa hat contained nothing but harmless electronic components.

As I exited the bank, I was careful not to slip on any of the hundreds of bullet casings that littered the shiny marble floor. I wondered what had happened to the photo of the mother and curly-haired, honey-skinned child. I hoped, for whatever reason, that Amanuel was still clutching it as he died. "I'm not going to hurt you," he had told me. He kept his word.

Paul Lee Cannon is a freelance writer and recipient of the New America Media Award. His work has been published in the San Francisco Chronicle, San Jose Mercury News, The Advocate, KoreAm Journal, Pacific Horticulture and Quill.