"Sons of Anarchy" comes roaring back to TV

After a problematic third season, FX's grandiose biker drama rights itself and aims to be "The Godfather" on wheels 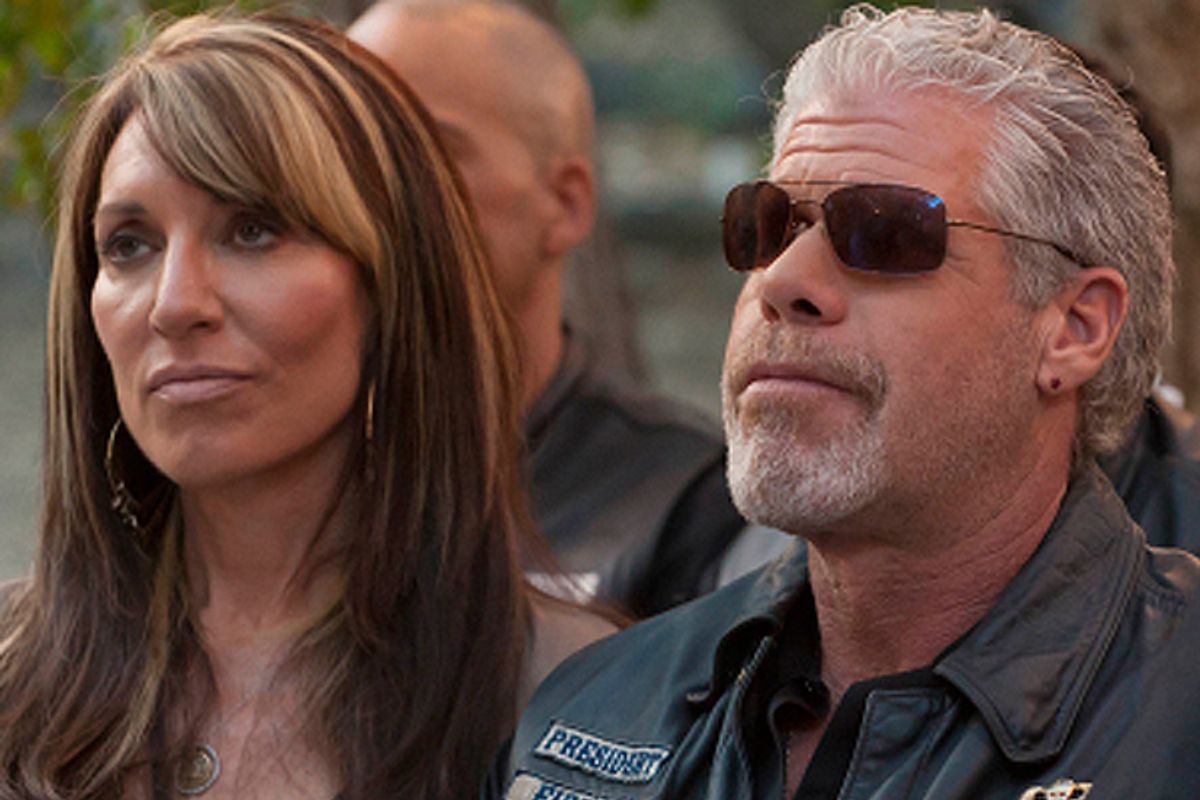 A mama and her daddy: Katey Sagal and Ron Perlman in "Sons of Anarchy."
--

[This article contains spoilers for Season 4, Episode 1 of "Sons of Anarchy." Read at your own risk.]

The biker drama "Sons of Anarchy," which returned for a fourth season on FX tonight, has had drastic creative ups and downs -- especially last year, when it was often terrible. But it was never less than an ambitous show with an outlaw spirit. Tonight's premiere, "Out" -- in which the gang gets out of prison after 14 months and returns to find that its hometown of Charming has changed -- is "Sons" at its finest, easily one of the best individual episodes of a drama that I've seen this year. The elapsed time between this season and the last gives the show a chance to put the overreaching of Season 3, with its high-stakes Ireland adventure, behind it, and become centered again. The hour is executed with an easygoing swagger that's the hallmark of artists who know what they're doing and why.

The opening and closing montages are the highlights. As written by series creator Kurt Sutter and directed by TV veteran Paris Barclay (who's also an executive producer this season), they're modeled on major sequences of the "Godfather" films. At their best they attain a tattooed cracker version of those movies' operatic bigness, contrasting moments of undeniable tenderness, fellowship and charm with shocking amorality and horror-show violence. They remind us that "Sons of Anarchy" is one of the few truly cinematic series on TV, capable of laying out a lot of information with little dialogue.

The curtain-raising montage in "Out" runs for over seven minutes. The first completely audible line of dialogue doesn't appear until the halfway mark. The actors' faces and bodies and the compositions that enclose them carry the weight of the storytelling: a shot of Jax's torso festooned with shiv scars; a wide shot of the gang, newly paroled, turning to face an exit door that has just opened, blasting the room with sunlight; a close-up of blood welling out from beneath a cell door that tilts up to reveal a prison guard discovering the mess, setting up a plot point that will flower in the episode's closing sequence; a close-up of the back of a bald black man's head in a barber shop, which pans to reveal the town's new chief law enforcement officer, San Joaquin sheriff Eli Jefferson (Rockmond Dunbar of "Prison Break"), smiling at his own reflection; a brief shot of the new Assistant U.S. Attorney, Lincoln Potter (Ray McKinnon, the doomed reverend from "Deadwood"), whose uncreased leather jacket, long hair and cigarette confirm that he's not your standard-issue tight-assed fed. Every shot is like this: terse, functional, lovely. The sequence is as tight as a rocking chair built without nails.

The rest of the episode is nearly as strong. The gang goes home and finds that Charming has changed. Mayor Jacob Hale has masterminded a scheme to gentrify the town -- a great touch that underlines another one of this show's strengths, its distaste for the invisible shackles placed on anyone who lives outside society's norms. The shot of Clay Morrow (Ron Perlman) staring at a luxury condominium sign has a iconic feel that links this show to classic westerns. The newly-sprung Sons on their hogs might as well be the an 1880s outlaw gang riding through territory that had been desolate before and discovering railroad track stretched from horizon to horizon.  Clay's arthritis has gotten worse -- so bad that he's becoming that indestructible crime thriller archetype, the greying lion who has to make one last big score and then retire. But before he does that, he wants to push back against the sheriff, the U.S. attorney and the mayor. Clay's scheme to spoil the development dovetails with a couple of other subplots involving a shipment of arms that the Sons want to steal from Russians and sell to a Mexican gang. It all twists together -- braids, practically -- in that closing montage, which is unfortunately set to yet another cover version of the way-overworked "What a Wonderful World," but is so expertly constructed that it dazzles anyway. (There's a glimpse of white picket fence in the ghastly final shot, but only a glimpse.)

The post-"Sopranos" TV landscape is filled with shows that traffic in moral relativism, and that desperately want to re-create that push-pull effect that you get from really strong gangster films and crime thrillers -- the kind where you spend a large part of the story caring very much about the main characters, then suddenly recoil in horror at whatever outrage they've committed and feel appalled with yourself for caring about them. "Sons of Anarchy" is very much in that mode (so was "The Shield," the show that Sutter worked on before this one).

But what separates "Sons of Anarchy" from almost every other program of its type -- including "Breaking Bad" and "The Sopranos" -- is that it puts you right in the middle of its outlaw characters' lives and encourages you to understand their world not from from the outside in (the norm for TV crime series) but from the inside out. You're not watching a good man become a bad man, the arc of "Breaking Bad." Nor are you scrutinizing gangsters or crooked cops with an almost anthropological detachment, which was usually the case on "The Sopranos" and "The Shield." The "Sons" characters aren't good guys or bad guys; they are quite simply our guys (and girls). They're us. They're you. When they play with their kids or dote on their significant others -- the scenes between Clay and his old lady Gemma (Katey Sagal) are especially tender and convincing; Sagal should have already won an Emmy for her work on "Sons" -- you never feel that horror film chill that you sometimes got while watching the Corleones, or the Hill family in "GoodFellas." The images of domestic warmth are sincere and straightforward. So are the moments of gruff male friendship, which have a touch of Sam Peckinpah about them. (Sagal, Perlman, Mark Boone Junior, Kim Coates, Dayton Callie -- is there anybody over 40 on this show that Peckinpah wouldn't have cast in a western?)

All of which should make the gang's violent acts seem like mere plot points -- nothing to get  worked up about. Yet the effect (on me at least) is the opposite: I'm more appalled by what these characters do in the name of money and loyalty than I would be if the show had given me a protected position from which to study them. When I hear Clay griping about how the mayor and his real estate cronies want to price working people out of their own hometown, the scene resonates with me, because I fear the same thing happening to my family; but his solution is so ghastly, and it's arrived at so casually, that it's impossible to approve of. It's as if your dad complained for the ten thousandth time about the guy across the street who keeps running his lawnmower every Sunday morning, then hauled out a hatchet and said, "Stay here, I'll be right back." Watching the show's de facto protagonist, Jax -- a handsome action hero, tender lover and devoted dad -- repeatedly stab a man to death in this episode in the woods behind an outdoor wedding reception is startling, because he's not some just some random biker thug. He's your representative, your idealized reflection. He's you.

When the notoriously hotheaded Sutter bitched in his Twitter stream that awards groups neglected "Sons of Anarchy" because they were too old to understand the show, he misunderstood the nature of their disdain. They got the show, all right, and it creeped them out -- as well it should have. Sutter, Barclay and company aren't making conventional entertainment that jostles viewers' moral certitude just a little bit, then returns them to whatever mental safe house they were hold up in during the rest of the week. They're not viewing criminals from a detached middle class intellectual perspective, as "The Sopranos" and so many other great cable series did. "Sons" is more interested in visceral sensations and big emotions. Its writers and directors are working in the same vein as Peckinpah, Walter Hill ("The Long Riders") and modern splatter auteur Rob Zombie, whose whacked-out 2005 film "The Devil's Rejects" feels like this show's gothic horror stepdaddy.  (Seriously, look at this.) You're not supposed to approve of these people. You're supposed to see yourselves in them, then imagine what you might be capable of.  That's why I love this show even when it's stumbling around like a headless chicken. It believes in the story it's telling and expects everyone watching the series not just to have a good time, but to commit. If every drama series had a tenth as much passion, TV would be a far more interesting place.