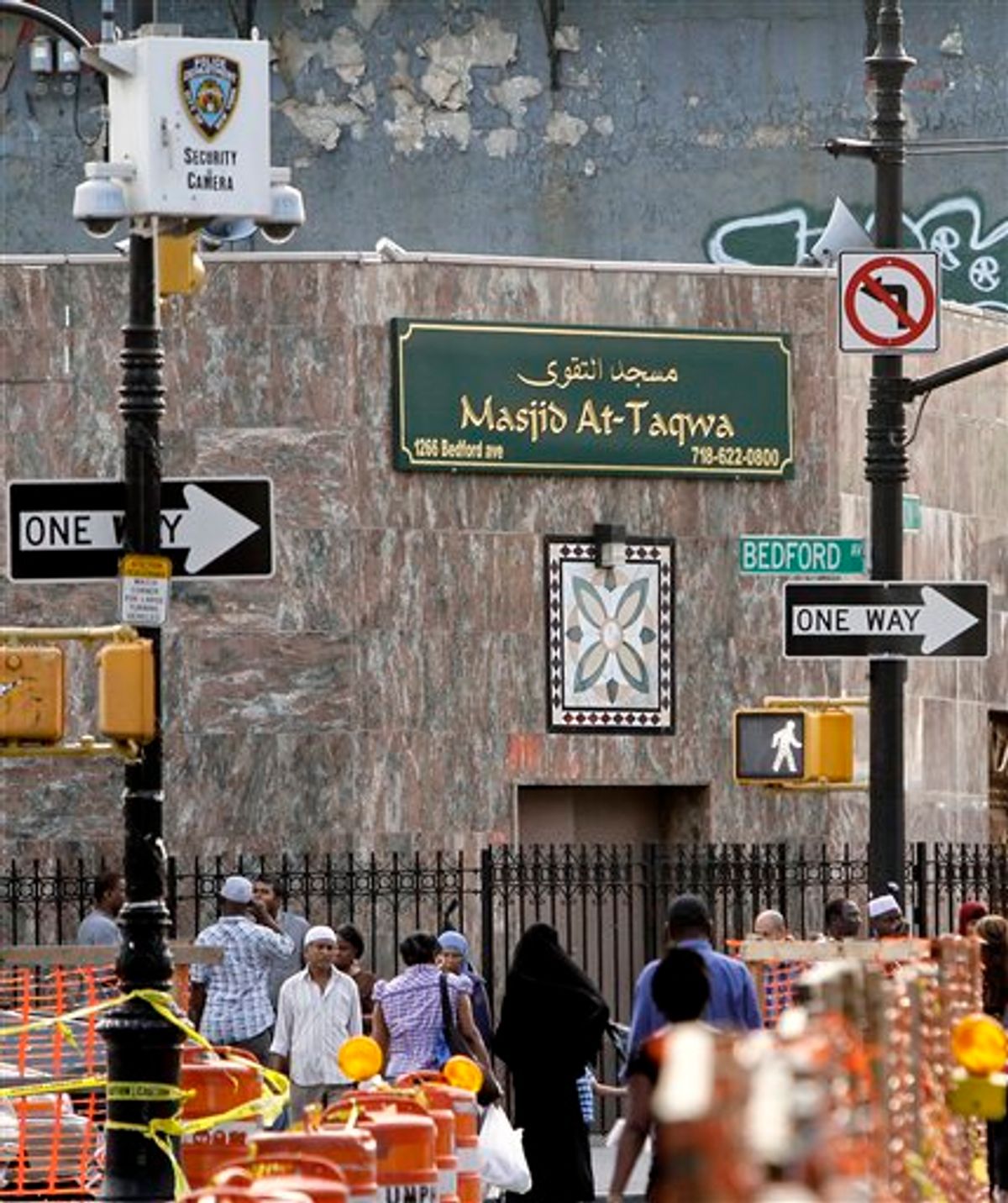 In this photo made Aug. 18, 2011, people pass below a New York Police Department security camera, upper left, which is above a mosque on Fulton St., in the Brooklyn neighborhood of Bedford-Stuyvesant in New York. The New York Police Department collected intelligence on more than 250 mosques and Muslim student groups in and around New York, often using undercover officers and informants to canvas the Islamic population of Americas largest city, according to officials and confidential, internal documents obtained by The Associated Press.(AP Photo/Bebeto Matthews) (AP)
--

The New York Police Department collected intelligence on more than 250 mosques and Muslim student groups in and around New York, often using undercover officers and informants to canvas the Islamic population of America's largest city, according to officials and confidential, internal documents obtained by The Associated Press.

The documents, many marked "secret," highlight how the past decade's hunt for terrorists also put huge numbers of innocent people under scrutiny as they went about their daily lives in mosques, businesses and social groups.

An Associated Press investigation last month revealed that a secret squad known as the Demographics Unit sent teams of undercover officers to help key tabs on the area's Muslim communities. The recent documents are the first to quantify that effort.

Since the 2001 attacks, the police department has built one of the nation's most aggressive domestic intelligence agencies, one that operates far outside the city limits and maintains a list of "ancestries of interest" that it uses to focus its clandestine efforts. That effort has benefited from federal money and an unusually close relationship with the CIA, one that at times blurred the lines between domestic and foreign intelligence-gathering.

After identifying more than 250 area mosques, police officials determined the "ethnic orientation, leadership and group affiliations," according to the 2006 police documents. Police also used informants and teams of plainclothes officers, known as rakers, to identify mosques requiring further scrutiny, according to an official involved in that effort, who spoke on condition of anonymity because he was not authorized to discuss the program.

Armed with that information, police then identified 53 "mosques of concern" and placed undercover officers and informants there, the documents show.

Other reasons are less clear.

Two mosques, for instance, were flagged for having ties to Al-Azhar, the 1,000-year-old Egyptian mosque that is the pre-eminent institute of Islamic learning in the Sunni Muslim world. Al-Azhar was one of the first religious institutions to condemn the 2001 terrorist attacks. President George W. Bush's close adviser, Karen Hughes, visited Al-Azhar in 2005 and applauded its courage.

Al-Azhar was also a sponsor of President Barack Obama's 2009 speech reaching out to the Muslim world.

The list of mosques where undercover agents or informants operated includes ones that Police Commissioner Ray Kelly has visited and that area officials have mentioned as part of the region's strong ties to the Muslim community. Mayor Michael Bloomberg has stood beside leaders of some mosques on the list as allies in fighting terrorism.

The documents are a series of internal presentations, including one prepared for Kelly. Following the AP's reporting, they were provided to the AP and veteran New York police reporter Leonard Levitt, who runs the website NYPDConfidential.com. Because the list of mosques is so long and explanation for the surveillance is so limited, the AP is not identifying the individual mosques that were under surveillance.

An NYPD spokesman and spokeswoman did not immediately return messages seeking comment Monday, a holiday. The police department has said it follows leads and does not trawl entire neighborhoods.

New York Police identified 263 "hot spots" throughout the city, the documents show. Like the mosques, the examples of hot spots ranged from businesses that sold untaxed cigarettes and where inflammatory rhetoric was overheard to those with less obvious criminal connections.

At one Bangladeshi restaurant, for instance, police identified a "devout crowd" from a nearby mosque -- which was not among the listed mosques of concern. The restaurant's list of "alleged activities" also included being a "popular meeting location for political activities."

It is another example undercutting Bloomberg's claim that the NYPD does not take religion into account in its policing. Last week the AP revealed that the NYPD maintained a list of "ancestries of interest" that included "American Black Muslim," which is a religion, not an ancestry.

Police also kept tabs on seven of the area's Muslim student associations, defined in the documents as "a university-based student group, with an Islamic focus, involved with religious and political activities." Two were flagged for having Salafi speakers. One was cited for having students who are "politically active and are radicalizing."

The documents appear at times at odds with the White House's newly released policy on combatting violent extremism. That document discourages authorities from casting suspicion on communities or conflating strong religious views with violent extremism. The White House has declined to comment on the NYPD's clandestine programs but has applauded its counterterrorism efforts.

Since the AP reports, several Muslim civil rights groups and a New York congresswoman have urged the Justice Department to investigate the NYPD for what critics see as racial profiling. Under Attorney General Eric Holder, the Justice Department has stepped up investigations of local police departments for possible civil rights violations, but none involves national security cases.