Bill Gates' deal with the government of Tunisia, and other instances of officials and corporations behaving badly 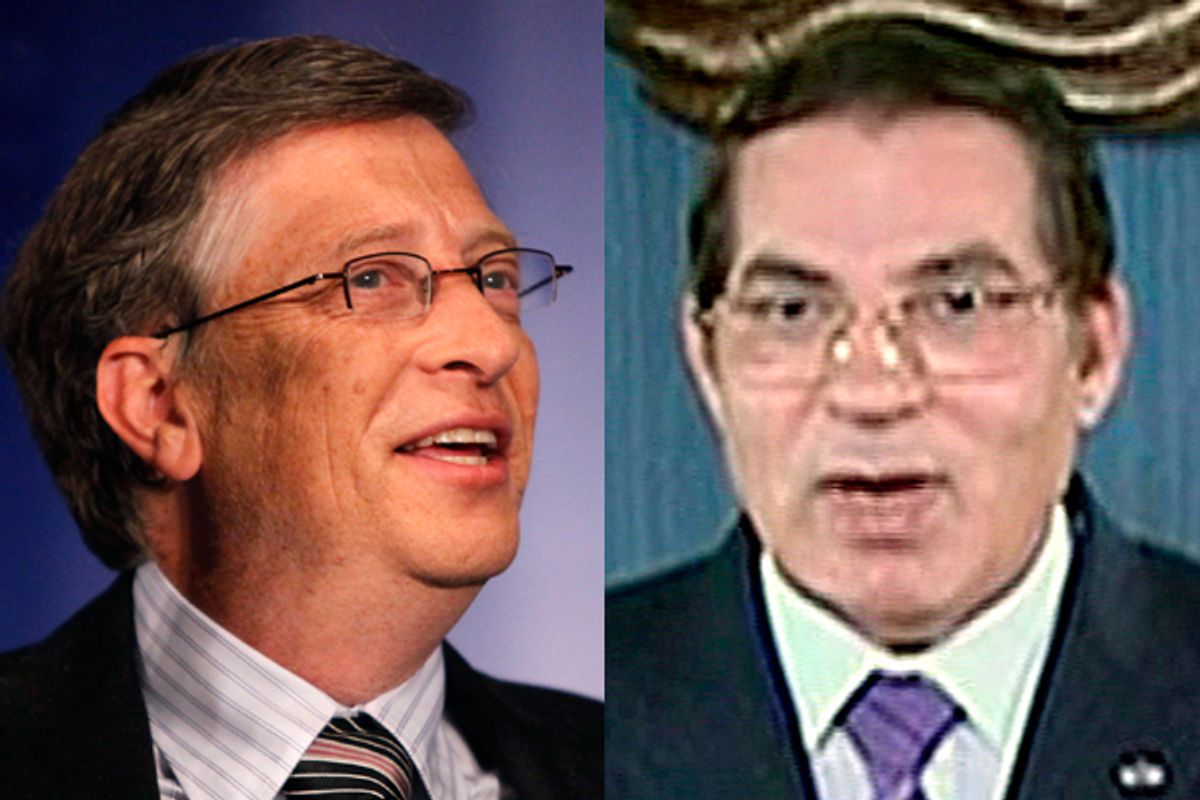 Politicians and corporations behaving badly: that's one theme that emerges from the latest secret State Department cables released by WikiLeaks.

The new revelations don't measure up to the seriousness of the alleged massacre of civilians by U.S. troops in Iraq that I delved into over the weekend. But they are still very much worth noting.

A cable from 2008 titled "Mayawati: Portrait of a Lady" reports that the chief minister of India's Uttar Pradesh state (the country's most populous) once dispatched an empty private jet to Mumbai to procure her favorite brand of sandals:

Mayawati's full majority victory in May 2007 UP State Assembly elections left her beholden to no one and has allowed her to act on her eccentricities, whims and insecurities. When she needed new sandals, her private jet flew empty to Mumbai to retrieve her preferred brand. According to Lucknow journalists, she employs nine cooks (two to cook, the others to watch over them) and two food tasters.

At a press conference today, Mayawati called the report "wrong, baseless, and disgusting." She also asked that Julian Assange be put "into a mental asylum."

Jumping over to the Middle East and North Africa, two more revelations of interest: First, it appears that U.S. diplomats were skeptical of a deal between Microsoft and the now-deposed dictator of Tunisia, Zine al-Abidine Ben Ali.

In a September 2006 cable flagged by ZDNet, an official at the embassy in Tunis expressed reservations about a deal that provided "for Microsoft investment in training, research, and development, but also commits the GOT [Government of Tunisia] to using licensed Microsoft software." The basic concern was that the software giant would be helping Ben Ali's regime oppress Tunisians more effectively.

Wrote the author of the cable:

Microsoft's reticence to fully disclose the details of the agreement further highlights the GOT emphasis on secrecy over transparency. In theory, increasing GOT law enforcement capability through IT training is positive, but given heavy-handed GOT interference in the internet, Post questions whether this will expand GOT capacity to monitor its own citizens. Ultimately, for Microsoft the benefits outweigh the costs.

Finally, a cable from Iraq flagged by AFP provides a snapshot of the ever-increasing reliance on private military contractors by the United States. The basic concern was that Iraq, which had already banned Blackwater from the country after the notorious 2007 Nisour Square shooting, would also ban all former Blackwater employees. And the U.S. still relied on the same corps of former Blackwater employees who had joined other firms like Triple Canopy and DynCorps.

[A government spokesman] also indicated that the GOI [Government of Iraq] might expel former Blackwater employees out of Iraq, potentially complicating security services for the Embassy. ...

[T]here are many former Blackwater employees at other private security companies in Iraq, most notably Triple Canopy and DynCorps providing security services to us.

UPDATE: A Microsoft spokesperson sends along this statement:

Microsoft partners with countries around the world to help spur local IT innovation and job creation, help broaden access to IT, and to enable governments to adopt IT in the delivery of services to citizens. This has been the focus of our work in Tunisia.