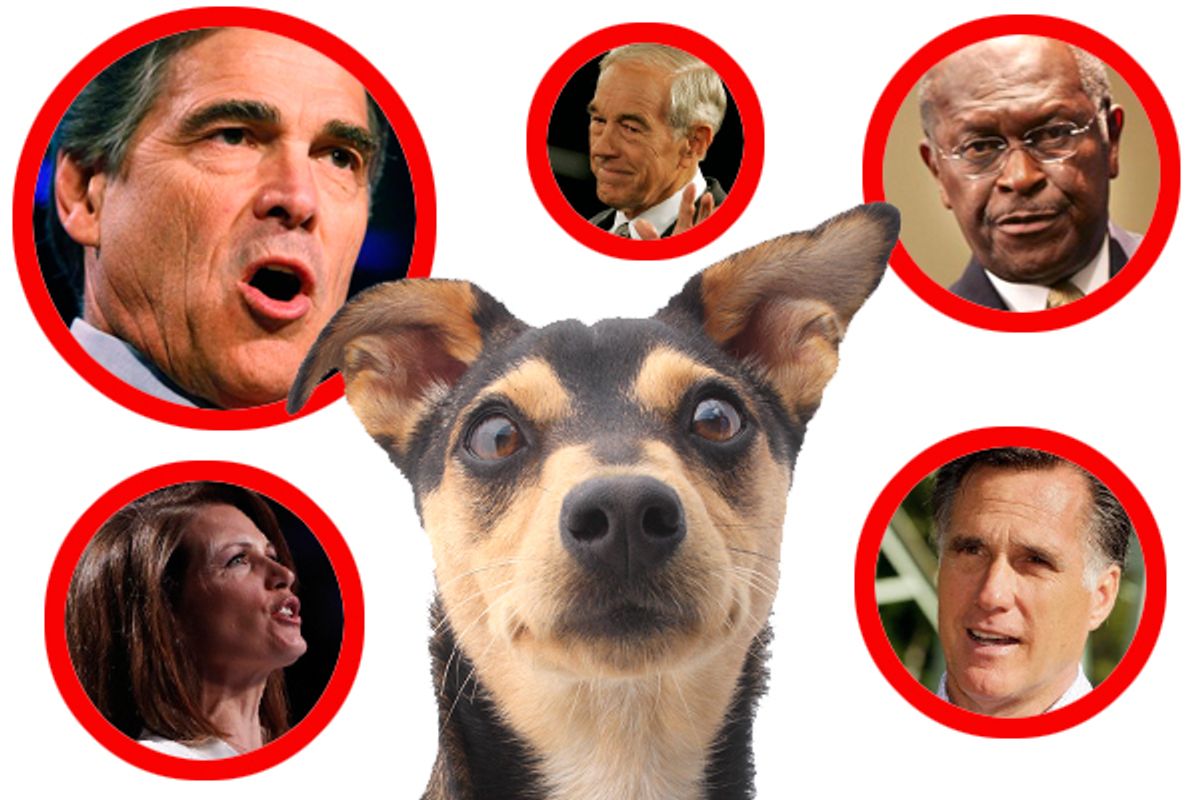 When appealing to Christian conservatives, Republican presidential candidates sometimes use phrases, rhetoric and imagery that are unknown to voters unfamiliar either with the religious meaning of such language or where they fit in the mythology of the "Christian nation." Thus candidates can signal sympathy with religious conservatives without making overt appeals that might alienate more secular voters.

Such phrases have become popularly known as "dog whistles," a reference to the high-pitched devices that emit sounds inaudible to humans but attention-grabbing for canines.

The candidates for the GOP's 2012 nomination have used dog-whistle phrases in previous debates and may again in the debate tonight at the Reagan Library. Here is guide to what to listen for and what these phrases mean:

"Tip of the spear" Campaigning in Iowa last month, and in the Fox News debate just before the state GOP's straw poll, Rep. Michele Bachmann repeatedly portrayed herself as the "tip of the spear" in fighting against administration initiatives like "Obamacare."

This military term, when adopted by evangelicals, is used to depict someone being on the front lines of a cosmic or spiritual battle. Brian Kaylor, author of "Presidential Campaign Rhetoric in an Age of Confessional Politics," a news site run by the Baptist Center for Ethics, compared Bachmann's "tip of the spear" reference to George W. Bush's 2003 use of a classic hymn "to talk about the 'power, wonder-working-power' of the American people."

The "tip of the spear" phrase, Kaylor says, is especially popular among "evangelical home schoolers." "These subtle references may strike others as unusual -- if noticed at all -- but demonstrate a level of familiarity with evangelical voters that many politicians are unable to fake." Bachmann's use of this dog whistle -- and her mobilization of the home-schooling movement -- helps explain her Iowa straw poll victory, according to Kaylor.

"Shining City on the Hill" At the Labor Day debate in South Carolina, moderator Rep. Steve King questioned the five candidates present about whether they believed, as Ronald Reagan did, that the United States of America is a "shining city on the hill."

Bachmann demonstrated her familiarity with Reagan's rhetoric and its biblical and historical context when she replied, "Those comments actually come from the Book of Matthew. And those comments were also given in a sermon by John Winthrop when he was on the Arbella, with some of the early Pilgrims in 1630."

Reagan's use of the Winthrop sermon throughout his 1980 campaign was an expression of "his belief that God had divinely created and blessed America and that America's founders -- as he did -- trusted in God to lead the new nation," says Kaylor in his book.

Reagan, much like Bachmann and Rick Perry do in 2011, analogized his presidential campaign to a religious revival and portrayed himself as being on a spiritual mission. "With this framing," Kaylor writes, "his political campaign became a religious crusade designed to keep America following in God's will."

The "shining city on the hill" phrase evokes two essential elements of the religious right's "Christian nation" mythology: American exceptionalism and the need for revival. God ordained America as the exceptional nation designed to carry out his will, and a revival is necessary because America has been headed down a sinful path as a result of secularism, abortion, gay rights and other offenses against "biblical truth."

The candidate who invokes "the shining city on a hill" is not just signaling admiration for Reagan but a shared ideology of America's founding with religious right figures like David Barton who contend that the separation of church and state is a "myth" and that America's founders intended to create "a Christian nation."

"Endowed by our Creator" This language from the Declaration of Independence has been quoted by Bachmann and Newt Gingrich to affirm their view that God, not the government, confers the rights guaranteed in the Constitution.

The Constitution, in this view, is not just a historical document but an articulation of God's vision for America, which includes a divinely required limitation on the activities of the federal government. In describing the Constitution at the South Carolina debate, Bachmann used the word "sacred," suggesting it was actually ordained by God. With this language, the speaker is effectively suggesting that American rights originate in Christian doctrine.

Dred Scott When George W. Bush said in a 2004 debate that he would not appoint Supreme Court justices who would agree with the Court's 1857 Dred Scott decision, many observers were baffled. Wasn't Dred Scott, which held that slave owners could treat their slaves as property even in states and territories that prohibited slavery, and that denied the citizenship of freed slaves, tossed into the dustbin of history by the Civil War and passage of the 13th, 14th and 15th Amendments? It turned out that for anti-choice activists, Dred Scott is a subtle way of referring to Roe v. Wade: a decision also made by "activist judges" that denied the full personhood of fetuses.

This usage persists. In South Carolina on Monday, Robert George, Princeton University professor and architect of the religious right manifesto the Manhattan Declaration, invoked Dred Scott. In questioning Herman Cain, George declared that Abraham Lincoln had to confront the decision, which, in his words, "usurped the authority of the elected representatives of the people," just like Roe v. Wade is said to today. If Dred Scott comes up in tonight's GOP debate, it will be a way for the candidate to signal not only opposition to Roe but antipathy to "activist judges."