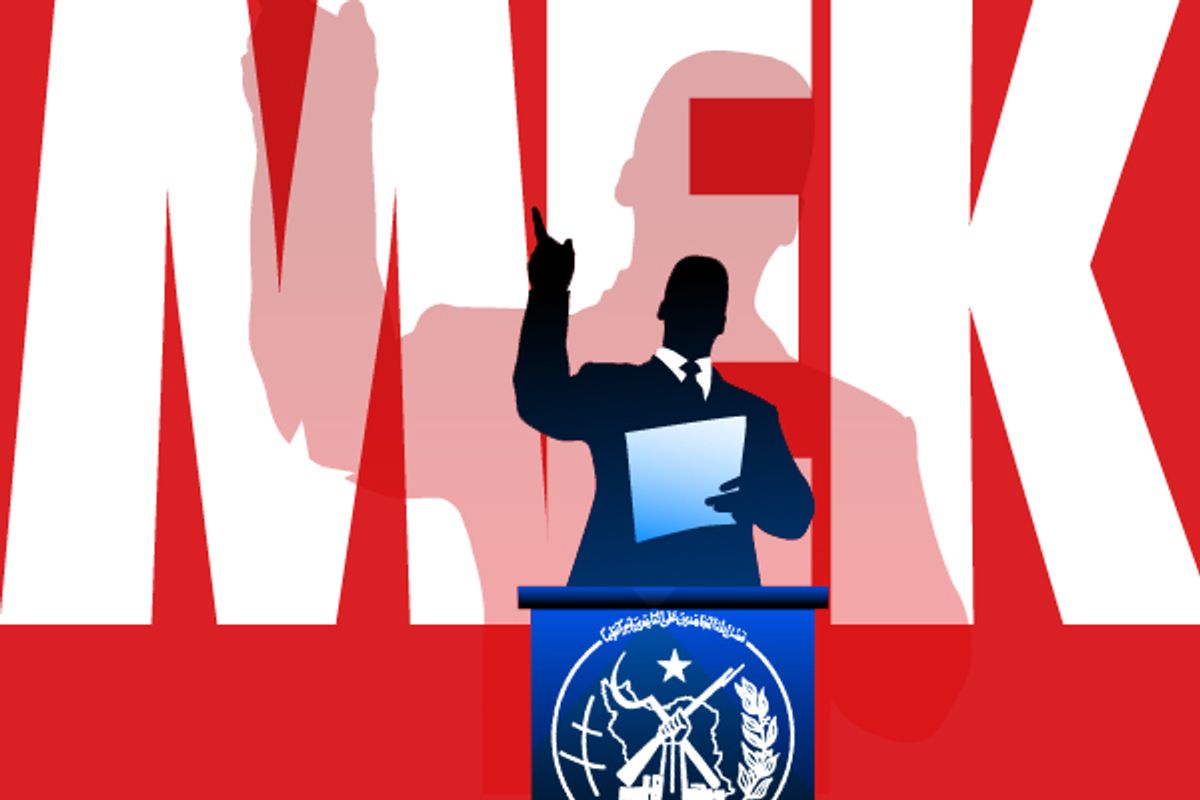 A Pennsylvania speakers bureau is sending out invitations for a lucrative speaking opportunity on behalf of an officially designated terrorist organization, the Mujahideen-e Khalq (MEK) of Iran, according to an email obtained by Salon.

Last week, a person at a Washington think tank was emailed the $10,000-plus-expenses offer to speak at a Geneva event by Lourdes Swarts, managing director of 21st Century Speakers Inc., "on behalf of our client, the National Council of Resistance of Iran, Foreign Affairs Committee."

The National Council of Resistance of Iran (NCRI) is listed as a foreign terrorist organization by the State Department, and is described as the "political front" of the MEK.

The language of the contract indicates  Swarts -- as well as anyone who agrees to the speaking offer -- is breaking the law that bars material support for terrorism, according to Georgetown Law School professor David Cole.

"This is clearly an invitation to provide a service to a designated group. This would be a clear violation of the law," says Cole, who last year argued a major material support case before the Supreme Court. The material support law bars providing not only money and weapons to a foreign terrorist organization, but also "service," defined by the government as anything of benefit to the group performed in coordination with or at the direction of the group.

Cole adds that Swarts is "committing a crime because she's providing a service to NCRI by arranging for this."

Reached by phone Tuesday evening, Swarts told Salon that the speaking request is "a private communication between me and my customer," then hung up. She did not respond to a follow-up email seeking comment.

The Geneva event, to focus on the situation of MEK members at Camp Ashraf in Iraq, is scheduled for Sept. 22 to coincide with a meeting of the UN Human Rights Council, according to the email, which you can read here.

The offer by 21st Century Speakers comes amid a sustained campaign by the MEK and its supporters to convince the Obama administration to remove the group from the list of foreign terrorist organizations. Derided as cult-like by critics, the MEK killed Americans in the 1970s and attacked Iranian targets as recently as a decade ago, but has since claimed to renounce violence. It fiercely opposes the current Iranian regime, a stance that has attracted support from neoconservatives in the U.S.

The group's P.R. pus has enlisted former officials of all political stripes, from liberal former presidential candidate Howard Dean to Republican Rudy Giuliani. Some officials have acknowledged receiving fees as high as $20,000 for a 10-minute speech. But one of the hallmarks of the campaign is that third-party groups have taken the lead in sponsoring conferences and pro-MEK demonstrations -- presumably because it would be illegal for anyone to take part if the MEK itself was the organizer.

Conferences to advocate for the MEK have been organized by émigré groups that seem to have no other purpose than to push the MEK's agenda, including, for example, the Iranian American Community of Northern California. Huffington Post reported last month that "most of the groups are run by ordinary, middle-class Iranian Americans working out of their homes -- people who seem unlikely to have an extra few hundred thousand dollars laying around to pay speaker fees and book five-star hotels to bolster the MEK's cause."

The website for 21st Century Speakers, which is based in Covington in rural northeastern Pennsylvania, purports to offer clients access to a long list of "the world's foremost speakers and celebrities," including First Lady Michelle Obama, George H.W. Bush, and pastor Rick Warren. But just a handful of the scores of names are marked with the tag "exclusive representation." One of those, former congressman Tom Tancredo, has been one of the loudest voices in favor of delisting the MEK over the last decade (though he told Salon Tuesday he had not been paid for any of the work).

Another of the company's "exclusive" speakers is former Pennsylvania congressman Curt Weldon. In 2005, Weldon penned "Countdown to Terror: The Top-Secret Information that Could Prevent the Next Terrorist Attack on America -- and How the CIA Has Ignored It." The book, which warned of Iranian terrorism against the U.S., was reportedly based on information from a discredited Iranian expatriate in Paris who was said to to get "intelligence" material from the MEK.

Still, how exactly 21st Century Speakers came to have the National Council of Resistance of Iran as a client is not clear. I've reached out to NCRI and will update this post if I hear back. It's also not clear whether any Americans have accepted the $10,000 speaker offer.

My colleague Glenn Greenwald argued recently that because of the MEK's support in elite political circles, it is functionally immune from prosecution.

While Cole, the Georgetown professor, has argued that the material support statute is too broad, he says he is troubled by the selective application on the law: Prosecutions have been made against supporters of the Kurdistan Workers' Party in Turkey and, just last week, a young Virginia man who made a YouTube video in support of the Lashkar-e-Tayyiba, a Pakistani jihadist group, but not against any MEK supporters.

"These are powerful defendants with lots of friends," Cole says. "The group itself already has wide support in Congress. It's the kind of case that's not going to get brought."