A revealing outbreak of candor 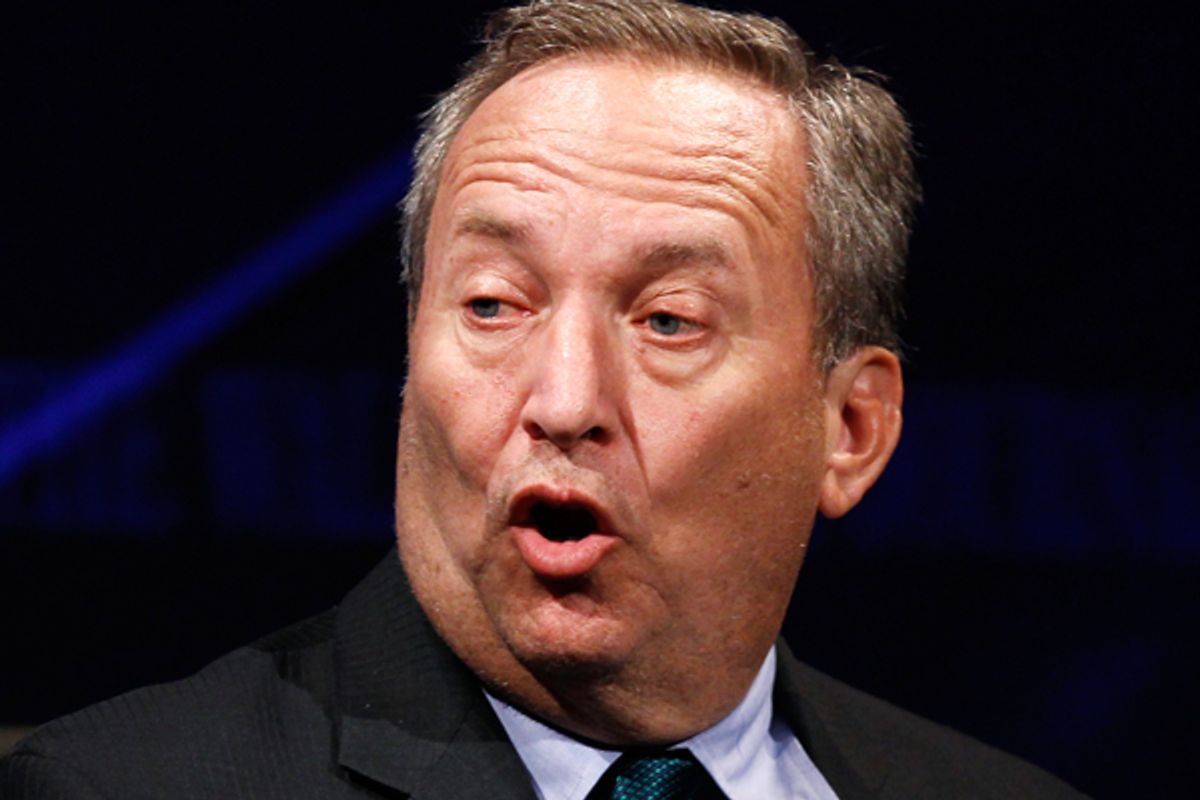 If honesty is contagious, then we may be experiencing a brief outbreak right now as America's political and business elite seem momentarily intent on acknowledging oligarchic reality.

On Sunday, as previously noted, the New York Times quoted Tom Watkins, a top business consultant, admitting that corporate education reformers are hoping the recession continues so that nobody notices their scheme to convert public schools into high-tech companies' private profit-making machines.

Two other similarly frank declarations from our political and financial Masters of the Universe provide candid, if brutal, insights into how the elite see the economy and democracy.

"There are those today who would resist the process of international integration; that is a prescription for a more contentious and less prosperous world," stated Summers. "We should not oppose offshoring or outsourcing." (emphasis added)

Before departing his White House perch, Summers was the Obama official who led the administration's successful fight against congressional Democrats' proposed "Buy American" provisions. Those provisions, which would have mandated stimulus funds actually be spent in the United States, were needed to prevent what Businessweek called "leakage," i.e., stimulus money heading overseas to subsidize offshoring. Thanks to Summers, though, the "Buy American" proposals in the stimulus were gutted. Now we know why: because, as he made clear in his recent speech, he's against any effort to halt the flow of American jobs offshore, even during a massive unemployment crisis. (Considering how closely this tracks to the Bush administration's position on outsourcing, we can add Summers' revelation to the long and growing list of similarities between the Obama and Bush White Houses.)

Then came the New Republic's Jonathan Chait, who (true to his signature contrarian form) penned a screed in the New York Times criticizing the American left for daring to question President Obama about the gap between campaign promises and governmental actions. In the process of lambasting those who had presciently argued for a bigger stimulus program, Chait exposed how he and most of his fellow elites in Washington see the general public:

"At the time, Obama’s $800 billion stimulus was seen by Congress, pundits and business leaders -- that is to say, just about everybody who mattered -- as mind-bogglingly large." (emphasis added)

In declaring who "matters" and who doesn't, Chait took a cue from Dick ("Public Opinion Doesn't Matter") Cheney, who famously  insisted that the American people are insignificant serfs. Only, in this case, Chait shows us the obverse of the Cheney-ism -- he tells us the only people who supposedly do "matter." In the nation's capital, that's Washington politicians, Washington pundits and corporate executives. Everyone else -- tens of millions of Americans who think differently -- are of little concern.

Give Watkins, Summers and Chait some credit for giving the public a rare glimpse into the true motives that forge elite consensus. Often, those shadowy forces are buried under platitudes and poll-tested buzzwords. So when openly expressed, these statements help us understand how seemingly haphazard Washington policymaking actually expresses a cogent ideology.

The trouble, of course, is that ideology runs counter to what most Americans want: a government that defends their interests.