The worst fiction about 9/11

Forget the best Sept. 11 novel -- there are far more contenders for the most shameful and embarrassing 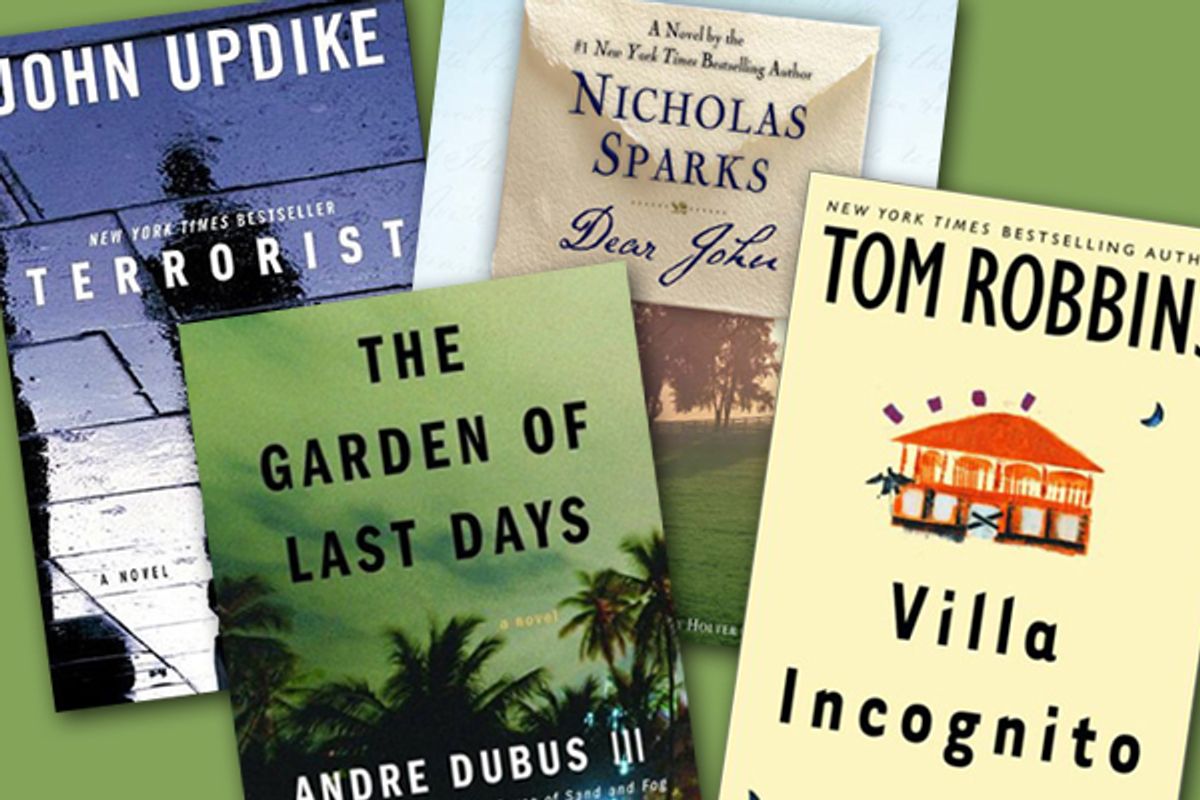 As the tenth anniversary of Sept. 11 approaches, there has been much discussion about the best novel about the attacks and their aftermath.

Of course, there have been smart and sensitive novels wrestling with the horrors of terrorism and the many traumas of that day. There's also been some embarrassingly bad prose -- lots of it by authors who should know better.

For some writers, 9/11 offered an excuse to write about the anatomies of sexy Western temptresses or the siren song that is rock 'n' roll performed by men in spandex. For others, it was simply an obligatory and careless plot point tossed into the mix, a cynical narrative device meant to energize a flagging story line. Here are a few of the worst offenders.

Andre Dubus III's "The Garden of Last Days" might be the weirdest of the bunch. Published in 2008, the novel tries to get inside the head of a terrorist-in-training named Bassam. In the name of hiding in plain sight in the decadent United States, he spends a lot of time getting drunk at strip clubs. "This dancing woman upon the stage," Bassam notes, "wears nothing but the hat of cowboys." Dubus meant to channel the thoughts of an al-Qaida operative but he ended up with a character who sounds like Borat.

But what distinguishes this book is Bassam's complex relationship with none other than the one-time frontman of Van Halen. Or as he puts it, "the singer David Lee Roth, an American Jew, [who] wore a cowboy hat like this" stripper. He's troubled by his fondness for American hard rock. "This David Lee Roth," Dubus writes, "if there was time Bassam would find him and kill him."

Roth hasn't gotten this kind of ink in 20 years -- but Bassam isn't done just yet. Late in the book he hears a song that reminds him of the days when he and his brother Khalid used to blast Van Halen: "It is the music of Khalid, David Lee Roth, this music for racing on the Road of Death, his loud screaming, his hat for cowboys ... the electric guitar of David Lee Roth pierces him like a sword ..." This last bit must've been a slip of the tongue, for as a superfan like Bassam surely knows, Roth wasn't the band's guitarist.

So much of John Updike's fiction evinced the author's appreciation for the female form. Though "Terrorist," the late novelist's 2006 book, dealt with religious fundamentalism in a post-9/11 world, it, too, spent a lot of time leering at ladies. Updike's main character is named Ahmad. He's a devout Muslim -- and a big-time breast man.

"The tops of her breasts push up like great blisters in the scoop neck of the indecent top" worn by one of Ahmad's schoolmates, Updike writes. Sixty pages later, he's still at it, taking note of "the tops of her breasts, exposed by a loose-necked springtime blouse." Elsewhere in the book, various breasts "bounce" and "swing"; they're "white as soap" or "dark as eggplants"; they're "freckled" and they "have crescents of shadow beneath their rounded weight." Updike was brilliant, but is it any wonder that David Foster Wallace once described him as a "champion literary phallocrat"?

The bulk of "Love Monkey," a 2004 novel by Kyle Smith, is light, jokey and a bit smug. Smith's main character, a know-it-all journalist named Tom, is the kind of guy who likes to instruct strangers on the differences between a simile and a metaphor. He gets annoyed when his date can't name the songs from "Pet Sounds." You know the type.

So it's all the more jarring when, 250 pages on, Smith introduces Sept. 11 into the narrative. Tom, who works in midtown Manhattan, just happens to be "all the way downtown" because he has jury duty. Convenient, that. Anyhow, upon learning that something's gone wrong at the World Trade Center, Tom knows what he has to do: "I ponder my next move. Ready? Set? Brag." Assuming that it's no big deal, maybe just a single small plane, he calls a friend, who fills him in on the unfolding catastrophe. The moral of the story? Tom's a tool, and all it took was a national disaster to get his head straight.

Tom Robbins' gonzo "Villa Incognito" came out in 2003, and Jennifer Haigh's domestic drama "The Condition" was published five years later. The novels have nothing in common, save for the fact that each uses 9/11 as an out-of-left-field footnote to add a sense of gravity and topicality to the proceedings. More than 200 pages deep in a 250-page novel, Robbins seems ready to wrap it up after devoting most of his book to missing-in-action soldiers and a badger-like creature with massive genitals (oh, that old chestnut). But then he tosses in a handful of completely nonessential Sept. 11 mentions. These do nothing but stall the story, but in a book that includes some truly embarrassing attempts at humor -- "the night was so black," he writes, "not even Michael Jackson's cosmetic surgeon could have lightened its hue" -- they're just more of the same BS.

Haigh does Robbins one better. On the second-to-last page of a 400-page novel, much of which takes place in Massachusetts, she uses the terrorist attacks on Manhattan and Washington, D.C., as a means of commenting on community and loss. Or something like that. This is less a resolution than a concession on the author's part: I don't know how to finish this novel, so I'll add a dash of 9/11 and call it a day.

Nicholas Sparks has made a very lucrative career out of weaving exceptionally maudlin stories about attractive yet lovelorn men and women. Hey, somebody's got to do it. His 2006 effort "Dear John" deals with an ex-soldier who, after learning of the attacks on the World Trade Center, decides he must join up for another tour of duty: "I was bound by the twin ties of friendship and responsibility." You see what he did there? Twin ties, twin towers. Nice one, Sparks.

The intent, of course, is to tug at heartstrings, but Sparks' prose is so flat and lifeless that it would take a defibrillator just to find a pulse. "Though the investigation into the perpetrators was completed quickly, 2001 drifted to an uneventful close for us," he writes, boringly. A few pages later: "August turned to September, then October ... In the newspapers, I read about the United Nations and how European countries wanted to find a way to keep us from going to war with Iraq. Things were tense in the capitals of our NATO allies ..."

Soon enough, his girlfriend sends John a letter in which she tells him to beat it: "So here I am, groping for words with tears on my cheeks and hoping that you'll somehow forgive me for what I'm about to write." It's a sentence that might serve as the epigraph for a future Nicholas Sparks novel.